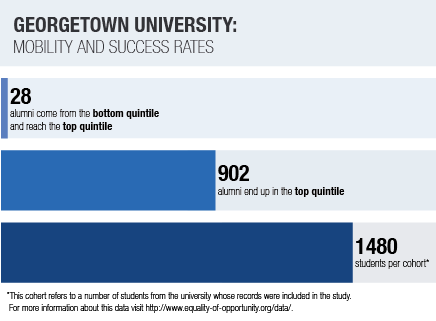 In a recent study by The New York Times, Georgetown University ranked 12th out of a list of 38 schools with more students in the top 1 percent of the income scale than in the bottom 60 percent.

While Georgetown ranks poorly for socioeconomic inclusivity, the report also showed that at Georgetown a poor student has a better chance of ending up in a higher income quintile than at other schools.

In a series of interviews with The Hoya, university administrators discussed how the country’s education system is skewed toward the upper classes, as well as the administration’s efforts to improve socioeconomic diversity at Georgetown.

One of Many
According to the Jan. 18 study, which was based on anonymous tax records, the median income for a parent of Georgetown’s class of 2013 was $229,100, the eighth-highest of the 2,395 colleges surveyed. Twenty-one percent of Georgetown’s approximately 6,700 undergraduates are from the top 1 percent, which is among the highest for the 10 member schools in the Big East Conference.

While the data in The New York Times study spans students born between 1980 and 1991, the number of students from the bottom 60 percent and top 1 percent remained consistent for every year.
Seventy-four percent of Georgetown’s undergraduate student body come from the top 20 percent, with the average Georgetown student in the 85th income percentile.

The New York Times broke down the colleges into several groups, with Georgetown in the “elite schools” category along with universities such as Tufts University and the University of Notre Dame. The selectivity tiers used in the report are based on a 2009 index created by college ranking guide Barron’s, and the report’s rankings are based on incomes calculated using records of 30 million students who graduated between 2002 and 2013 from more than 2,000 American colleges.

Georgetown’s socioeconomic demographics are far from representative of national trends. In 2013, 4.8 percent of the U.S. population had a household income over $200,000, and 48 percent of the population had a household income below $50,000. At Georgetown, 74 percent of students come from households with an income above $110,000, while 3.1 percent come from families with an annual income of $20,000 or less.

Moving Across Income Boundaries
In addition to shedding light on the socioeconomic backgrounds of Georgetown students, the study also showed signs of mobility: After graduation, 1.9 percent of Georgetown graduates between 2002 and 2013 moved from the bottom to top income quintile, and 11 percent of students moved up at least two income quintiles.

Compared to other universities, however, Georgetown still lacks socioeconomic mobility. Georgetown has the lowest number of students who end up in bottom 20 percent after graduation among all universities in Washington, D.C., with only 8 percent of its undergraduates falling in that income bracket.

In the Times’ mobility index, which incorporates both access and outcomes to illustrate the likelihood of a student moving up two or more income quintiles, Georgetown is ranked 1985th out of 2,137 colleges. This puts Georgetown on par with or better than other elite schools, with Princeton ranked 2,096th and Duke at 2,014th.

Attempts to Diversify
Although Georgetown’s class size is similar to schools like Notre Dame, Dean of Admissions Charles Deacon said the university competes for admissions with schools in most selective category, dubbed “Ivy Plus.” Among these schools are institutions such as Princeton University, Stanford University, the University of Chicago and Duke University. Deacon said this fact makes Georgetown less socioeconomically diverse.

“Georgetown’s status as essentially an Ivy Plus school attracts people from the highest end, who can pay,” Deacon said.
Senior Director of Communications Rachel Pugh said the university is committed to fostering a student body that is as diverse as possible through a series of programs intended to increase socioeconomic diversity at the university.

Georgetown has a series of programs intended to increase socioeconomic diversity at the university, including the Community Scholars Program, which seeks to create a more diverse student body, the Georgetown Scholarship Program, which targets first-generation and low-income college students, and the American Talent Initiative, a nationwide effort to increase access for low-income students.

“Georgetown is committed to recruiting and supporting a diverse student body through a range of programs and initiatives, including the Community Scholars Program, the Georgetown Scholarship Program, and American Talent Initiative among others,” Pugh wrote in an email to The Hoya.

“The university’s commitment to financial aid remains strong for the next fiscal year, with funding budgeted at more than $180 million,” Pugh wrote. “Nearly 40 percent of the undergraduate student body received need-based scholarship aid in the last fiscal year.”

Georgetown is one of only a few dozen colleges that provides need-blind, full-need admission and financial aid policies.

The Georgetown Scholarship Program, beyond seeking to increase the number of first-generation and low-income students at Georgetown, also helps those students transition to the university. Ninety-six percent of GSP students graduate within four years, while nationally, 64 percent of first generation students graduate within four years, according to a 2011 study by the Higher Education Research Institute at UCLA.

GSP Director Missy Foy (COL ’03) said that the university’s efforts are commendable given the size of its endowment compared with other schools it competes with for applicants.

“You have a lot of students coming in from that top 1 percent, perhaps more so than peer institutions, but other than that we are not out of line from our peer schools, and we have a fraction of the endowment,” Foy said. “Even schools that have a huge endowment are struggling to get students from the bottom fifth to apply and enroll.”

A Limiting Endowment
Georgetown’s socioeconomic situation is complicated by the university’s endowment, which amounts to about $1.5 billion as of the 2015 fiscal year. According to a 2015 Study of Endowments by the National Association of College and University Business Officers, Duke has an endowment of about $7.3 billion and Notre Dame’s endowment is about $8.6 billion. At the highest end end of the spectrum, Stanford University and Harvard University have endowments around $22.2 billion and $36.5 billion.

While Notre Dame’s endowment is approximately six times that of Georgetown, 75 percent of its 8,448 undergraduates come from the top 20th percentile, 1 percent more than at Georgetown, but only 1.6 percent come from the bottom 20 percent.

Deacon said top universities must make a concerted effort to attract students from across the income spectrum.

“For the elite schools in particular, there are not as many students who have the same kind of credentials, so you have to essentially put a thumb on the scale to look past lower scores and see the whole story,” Deacon said.

Toward a Less Disparate Future
Some Georgetown administrators believe the school’s endowment puts a limit on socioeconomic diversity, and have identified steps to make improvements.

Foy said she believes the main issue causing Georgetown’s lack of socioeconomic diversity is a lack of sufficient scholarship funds. For the 2016 fiscal year, 23.2 percent of Georgetown’s endowment contributed to undergraduate student scholarships, which includes the funds for GSP.

“Where we are truly struggling is in terms of money,” Foy said. “I would like to see more donations to current use or the endowment so we can enhance our scholarship packages and bring in a more diverse population.”

According to Foy, the percentage of students on financial aid is a more detailed indication of a school’s socioeconomic landscape than the income percentiles and quintiles used by The New York Times.

“From what we’re seeing, 10 percent of students can identify with a low-income experience. Forty-five percent of Georgetown students are receiving some form of financial aid,” Foy said. “Financial aid is a bit more nuanced than income quintile.”

“As our capacity to offer financial assistance to prospective students expands, I’m sure Georgetown will be able to shift the scales a bit more with regard to the socioeconomic diversity of its student population,” Fisk said.

Looking ahead, Foy said The New York Times report should not be perceived as an attack on wealthy students, but instead spark a conversation about socioeconomic diversity at Georgetown.

“This isn’t to vilify wealthy students,” Foy said. “We want them here. But I think the question is: What should the distribution be?”