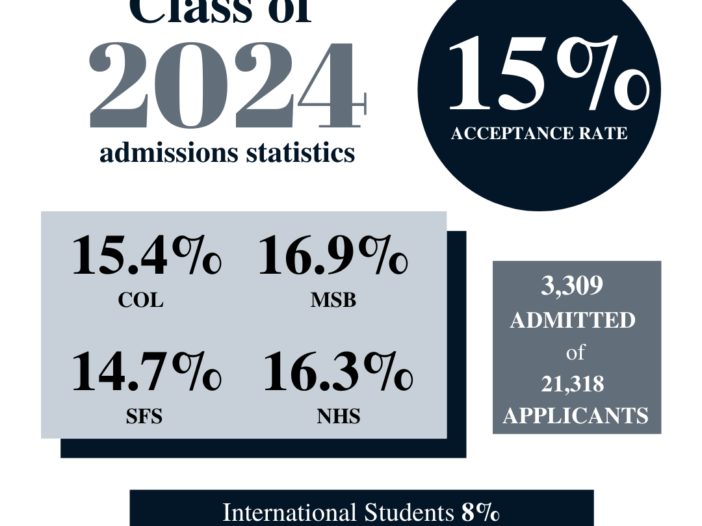 A total of 3,309 applicants were admitted to the Class of 2024 from a pool of 21,318 first-year applicants. The increased acceptance rate came after the pool of first-year applicants to Georgetown decreased by 3%. The university admissions committee also decided to accept about 100 more students than originally planned in anticipation of a low yield rate from the Class of 2024, according to Dean of Undergraduate Admissions Charles Deacon (CAS ’64, GRD ’69).

High tuition costs may be the largest factor for high school students to choose not to attend Georgetown, Deacon wrote.

“All of the top 20 US News universities had application declines of 5-10% this year so we are in that range,” Deacon wrote in an email to The Hoya. “We believe affordability is the primary issue as the total cost approaches $80,000.”

Recent announcements from U.S. Secretary of the Treasury Steven Mnuchin and other leading economists suggest that the ongoing COVID-19 pandemic will result in unemployment levels in the United States reaching 30%, surpassing those of the Great Depression. Over 10 million U.S. citizens have already filed for unemployment benefits over the last two weeks.

The national average annual college tuition for a private university or college in the United States is $36,801, according to U.S. News. For the 2019-20 academic year, full-time students at Georgetown paid $55,440 in tuition in addition to housing and other fees, according to the university revenue and receivables website.

If fewer admitted prospective students decide to attend Georgetown than in years past, students currently on the waitlist may have a better odds of receiving an offer of admission, according to Deacon.

“We did offer about 100 more acceptances than initially planned assuming there could be some impact on our typical yield of close to 50%,” Deacon wrote. “Students on the Waiting List could have a greater chance than usual if the yield does decline and we will be keeping in touch with them throughout April.”

This admissions season marks the first time the university did not send out regular decision letters by mail, according to Deacon. Letters were posted to students’ online admission portals March 20 at 6:30 p.m. to quickly notify students.

“We did this in the interest of letting students know where they stand as soon as possible,” Deacon wrote. “This is a very unpredictable time for college admissions across the country and we will be working along with the financial aid office to provide as much support as possible to these students and families as they approach this important decision.”

The university does not currently plan on extending the deadline to accept the offer to attend Georgetown from May 1, according to Deacon. Georgetown commits to a financial aid policy that meets all demonstrated need, according to the Office of Undergraduate Admissions website.

“There is no need to extend the deadline as we meet the full need and students will have 5 weeks from now until May 1 to decide,” Deacon wrote. “Also we have students on a Waiting List who deserve an answer.”

Colleges such as Williams College and George Mason University decided to push back their decision days in light of the COVID-19 pandemic.

Overall acceptance rates across all four schools increased compared to the 2019 admissions cycle, according to admissions records provided by Deacon.

Of the students admitted to Georgetown’s Class of 2024, 28% are Asian American, 13% are Latinx, 11% are Black and 1% are Native American, according to the admissions records. 11% of admitted students are first-generation college students, 9% are legacy students and 8% are international students.

Applications have decreased across all four schools, according to the admissions records. The decline comes after the applicant pool to Georgetown’s early action program shrunk for the second consecutive year.

During the early action admissions cycle, Deacon also said Georgetown’s significant overlap institutions, such as Boston College and the University of Virginia, began offering early decision programs that may have disincentivized students from applying early to Georgetown.

This year, admitted students will not be able to visit campus for Georgetown revisit days. The Office of Undergraduate Admissions announced the cancellation of Georgetown Admissions Ambassadors Program Weekends on March 11 amid concerns about the ongoing COVID-19 outbreak. Held throughout the spring, the weekends focus on introducing students to Georgetown’s academic and social culture through campus tours, department open houses and a campus activities fair, according to the GAAP website.

Though the decision to cancel GAAP weekend may come as a disappointment for admitted students, the university will provide online resources to convey information that would have been communicated to them during the weekend, a university spokesperson wrote in an March 11 email to The Hoya.

“This decision did not come lightly given the investment of time and capital families put into planning visits to Georgetown and Washington, DC,” the university spokesperson wrote. “In the coming weeks, Georgetown will make available a series of online lectures, chats, and experiences designed to connect future students with our academic life and campus community. Our hope is to replicate much of the programming they would have experienced during the Open House.”