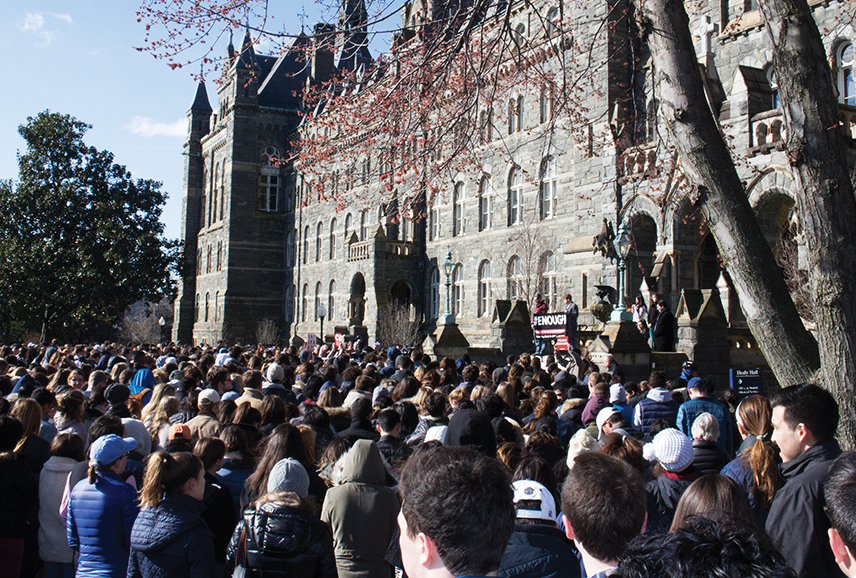 Georgetown University is set to post 21 signs around campus that will advertise the university’s explicit ban of weapons, including licensed handguns, on university grounds, approved at a Nov. 1 Old Georgetown Board meeting.

The regulatory signs received approval from the OGB, a council of architects appointed by the U.S. Commission of Fine Arts that oversees design review of proposed projects within Washington, D.C. The signs will likely begin appearing on campus within the coming months, according to a university spokesperson.

The signs will now undergo review from the CFA at their Nov. 15 meeting, which takes recommendations from the OGB.

The posting of the signs follows a 2017 appellate court ruling that overturned the district’s 2014 ban on concealed weapons except for those with “good reason to fear injury to [their] person or property,” according to the ruling. The U.S. Court of Appeals for the District of Columbia Circuit upheld a provision of the statute that allows for universities to prohibit firearms within the limits of private properties.

Regulatory signs typically do not face many obstacles in receiving approval from the OGB, according to Secretary of the CFA Thomas Luebke.

“Because these signs are fairly small in their visual impact and have been carefully located by the applicant, Georgetown University, on its campus, these signs as physical elements within the Old Georgetown Historic District are not generally controversial,” Luebke wrote in an email to The Hoya.

The signs come after increased national scrutiny on gun safety protocols on school campuses, following the mass shooting in Parkland in February, which killed 17 high schoolers. The university reviews its procedures after every national incident and multiple students expressed concern with the university’s protocol, according to Georgetown University Police Department Chief Jay Gruber.

Zachary Fagan (COL ’21), who spoke at Georgetown’s walkout for gun violence in February about his personal connection to the Sandy Hook shooting, said though the signs are important to students’ safety, the university should use its platform more in the discussion about gun violence.

“I believe the signs are definitely a step in the right direction regarding Georgetown’s response to firearm safety. In a city that has such a high rate of gun violence, it’s important that our campus makes it clear that weapons are prohibited,” Fagan said. “The university should continue to become more involved in the conversation surrounding gun violence — both locally and nationally — and find ways in which we can influence other schools around the country to do the same.”