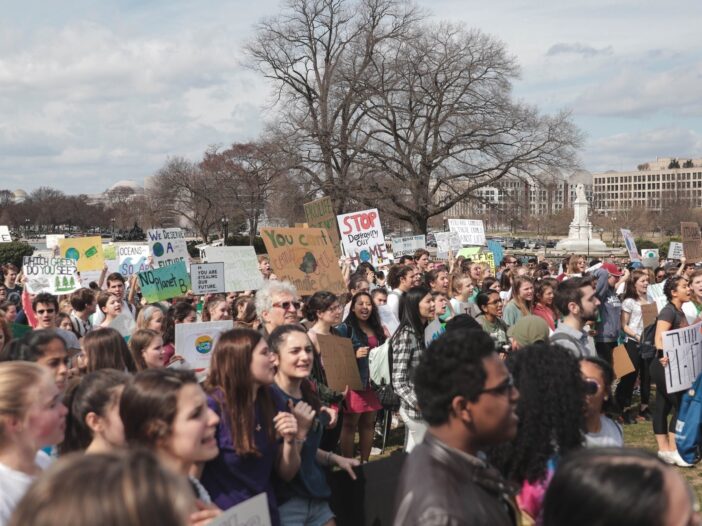 Activists advocated for the Biden Administration to take more action to combat climate change at a strike in Lafayette Park across the street from the White House.

At the April 22 event, which was organized by Fridays for Future, a global climate change advocacy movement launched by Swedish climate activist Greta Thunberg in 2018, hundreds of students and community members gathered to demand President Joe Biden officially declare a climate emergency.

If he does, the declaration will give Biden the executive ability to ban oil exports, suspend offshore drilling and boost funding for renewables, according to a Feb. 23 press release from the Center for Biological Diversity.

Protesters marched in the streets near the White House chanting and holding signs reading “Climate Action Now” and “THE CLIMATE CRISIS IS HERE.”

Students from the Georgetown Renewable Energy and Environmental Network (GREEN), a campus organization promoting environmental activism, and other students traveled to the protest as a part of GREEN’s programming for GU Earth Week, a student-led collaboration between student organizations and professors to promote sustainability on campus.

GREEN’s Environmental Justice Team co-lead Grace Jensen (COL ’24), said it is crucial to participate in the fight against climate change.

“Taking action into our hands is really important — even very small actions like recycling,” Jensen said in an interview with The Hoya. “I think that advocating for a better, cleaner, greener environment in our society is super important and we need to hold politicians accountable.”

Adriane Longhurst (COL ’25), who attended the protest, said the dangers of climate change will affect everyone.

“Climate change is an existential threat that has already displaced millions of people and will continue to displace and harm millions more people,” Longhurst told The Hoya. “Climate change affects and threatens almost every aspect of life. No amount of money will allow you to run away from that — it is inevitable.”

By the end of 2018, more refugees were displaced globally by climate disasters than war, according to the International Organisation for Migration’s 2020 World Migration Report.

Mayra Rios, a junior at James Madison High School in Vienna, Va. spoke at the event and said her family’s history with environmental injustice inspired her activism.

“As a first generation Latina, I not only have the privilege but responsibility to speak out against the environmental injustices I have watched my family experience right in the heart of our nation’s capital,” Rios said at the strike.

Rios, who is the executive director of the Virginia Youth Climate Coalition, a youth-led movement pushing for climate justice, said temperatures in Columbia Heights are 20 degrees higher than other neighborhoods in Washington, D.C. because of the large amounts of concrete and asphalt from large buildings, roads and sidewalks, which absorb heat.

“While my people are breaking their backs under the scorching sun, the corporate elite are sitting in their comfortable, air-conditioned offices, signing more and more fossil fuel initiatives,” Rios said. “They profit off of the destruction of our ecosystems, the ravishing of our countries and the exploitation of the people who lack power.”

In the past few years, D.C. has experienced record-breaking heat waves and snowstorms, higher tides due to rising sea levels, heavy rains and flooding, warmer average temperatures and two to three times as many dangerously hot days, according to the website for Sustainable DC, Mayor Muriel Bowser’s initiative for addressing climate change.

Lynetta Cho, a sophomore at the National Cathedral School, a high school in the District, said discussions on climate change and its impact must be held in schools.

Cho gave a speech at the protest and said she first learned of the implications of a climate disaster after her second grade teacher had her class watch a documentary on climate change.

“I remember entire cities being flooded, homes being burnt to a crisp, species ceasing to exist and just being so confused. For a seven year old, it was a lot all at once,” Cho said at the protest. “I was comforted by others when they said ‘this isn’t happening now and we’re okay.’ It was good to hear at the time, but if we’re being honest, it was never okay eight years ago, and it definitely isn’t okay right now.”

Jensen said it was thrilling to be around so many dedicated and proactive protesters.

“It is always really powerful to see so many young people come together to protest and fight for what they are passionate about,” Jensen said. “I thought it was a really good turn out, especially on earth day — always good to celebrate our earth and our communities as we continue to fight for them and for environmental justice and justice for all people.”