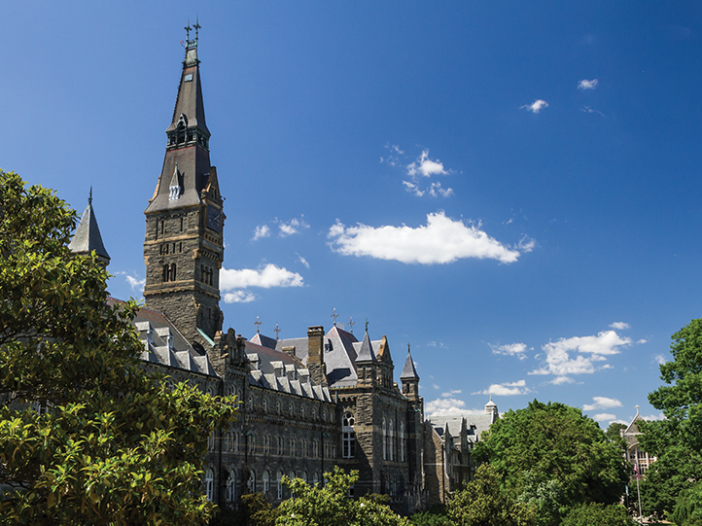 This article directly references racist content that is potentially upsetting. Please refer to the end of the article for on- and off-campus resources.

The recent Atlanta killings exemplify the anti-Asian racism and xenophobia that is prevalent throughout the United States, especially since the start of the COVID-19 pandemic, according to a statement issued by the Georgetown University Asian American Student Association.

“These attacks occurred in a cultural and social environment that has fostered anti-Asian hostility,” the statement reads. “However, we must understand that anti-Asian racism is neither a new phenomenon nor is it exclusive to America, but rather it is mired in long standing, global imperial histories and the orientalist notion that Asians are perpetual foreigners in the West.”

Last week’s shootings in Atlanta coincide with a nationwide rise in anti-Asian hate crimes, which have increased by 149% between 2019 and 2020 in 16 of the largest U.S. cities. Anti-Asian rhetoric has also risen following the COVID-19 outbreak.

The Georgetown Chinese Student Alliance has raised awareness and encouraged conversation through virtual discussions and shared testimonials to counter anti-Asian racism over the past year, according to Sonya Hu (COL ’22), co-president of the CSA. For instance, the CSA hosted a discussion about the impact of the COVID-19 pandemic and quarantine on mental health and the Chinese American community earlier this month. CSA is now creating a video highlighting student experiences with anti-Asian hate crimes and is working with other clubs to create a resource guide for API and AAPI students at Georgetown, Hu said.

“Many of our partners are organizations that I would love to see supported, including AASA, which has been doing a lot of great work in supporting Asian Americans and Pacific Islanders in general and has also been increasing its discussions about issues surrounding violence towards these communities,” Hu said in a phone interview with The Hoya.

Additionally, several Georgetown University Student Association senators released a statement March 14 expressing solidarity with the AAPI community following the rise in anti-Asian hate crimes. GUSA prepared the statement before the Atlanta attacks and addressed anti-Asian racism as a systemic problem, not as a singular event, according to GUSA Senator Leo Rassieur (COL ’23), who drafted and signed the statement.

“This was already a deep-rooted problem that had happened to gain a lot of national news attention in the past couple weeks,” Rassieur said in a phone interview with The Hoya. “I think it’s important to situate what we are doing right now in the context of the past year, of the past several decades, centuries, because it would be a disservice to the Asian American community to say that we are just responding to a certain day, when, in fact, we are not. There are years that we have to respond to and process and unpack.”

GUSA’s statement also supported the development of an Asian American studies program at Georgetown, which students have advocated for in recent years.

“The creation of Asian American studies program not only solidifies support for the AAPI community, but allows for there to be acknowledgement and celebration of their multifaceted community,” the statement reads. “Asian American studies program can be used to educate the student body, to set the stage for discourse on anti-racist rhetrioc and combat an over generalization of an extermmly diverse community.”

“Their call for Asian American Studies served as part of a broader call for Georgetown to begin valuing the rich cultural history and telling the stories of our Black, Latine, and Indigenous peers,” Ladao wrote in an email to The Hoya. “Our work remains indebted to the groundwork established by Black student organizers and faculty who fought for the African American Studies major and department—now, the call remains to be attended to for its Asian, Indigenous, and Latine students.”

The university is supportive of creating courses that reflect diversity and equity, and the engaging diversity core requirement encourages these values, according to a university spokesperson.

“The Engaging Diversity Requirement prepares students to be responsible, reflective, self-aware and respectful global citizens through recognizing the plurality of human experience and engaging with different cultures, beliefs, and ideas,” the spokesperson wrote in an email to The Hoya. “We hope that by fulfilling the requirement, students will become better able to appreciate and reflect upon how human diversity and human identities shape our experience and understanding of the world.”

In solidarity with Georgetown’s AAPI community, the university plans to support all faculty, students and staff and will work to create an equitable campus environment, according to University President John J. DeGioia (CAS ’79, GRD ’95).

“In recent months, we have seen growing violence and hatred against our Asian American

community in the United States,” DeGioia wrote in an email to The Hoya. “This is deeply concerning to all of us. We are called to be in solidarity with our Asian American students, faculty, and staff–to affirm our care and support for one another and to continue our work, here at Georgetown, to sustain a community that is inclusive, welcoming, and respectful of people of all backgrounds.”

In their efforts to create an equitable environment, activists confronting anti-Asian racism must keep in mind intersectionality within the community, according to Nirvana Khan (SFS ’24), a GUSA senator who contributed to the released statement.

“I know that South Asian women are definitely still fetishized and exotified, but personally I’ve faced a lot more dehumanization and being told I’m worthless and kind of masculinized. But East Asian women kind of experience the reversal of that. They’re seen as submissive. They don’t have the autonomy that they should be afforded,” Khan said in a phone interview with The Hoya.

The shootings have sparked a nationwide discussion about the misogyny Asian and Asian American women uniquely face. The shooter, police and many media outlets have attributed the killings to the killer’s “sex addiction” and mental health, which has come under criticism from activists and political leaders.

This reasoning exemplifies fetishization of Asian and Asian American women and fails to address the racist and misogynistic structures that contributed to the shooting, according to Khan.

“When it comes to fetishization, it strips Asian women of their autonomy and of their humanity, and it makes them sex objects,” Khan said in a phone interview with The Hoya. “You can’t see someone as a temptation unless you already don’t see somebody as human.”

Although AAPI student organizations are leading the efforts to spread awareness and improve representation in academia, combating anti-Asian sentiment requires the participation of allies, according to Khan.

“I want to encourage people to keep listening, keep going to events that people host on campus, keep going to Zooms, keep signing petitions and joining advocacy groups even after the pandemic because racism against AAPI isn’t going to go away,” Khan said.