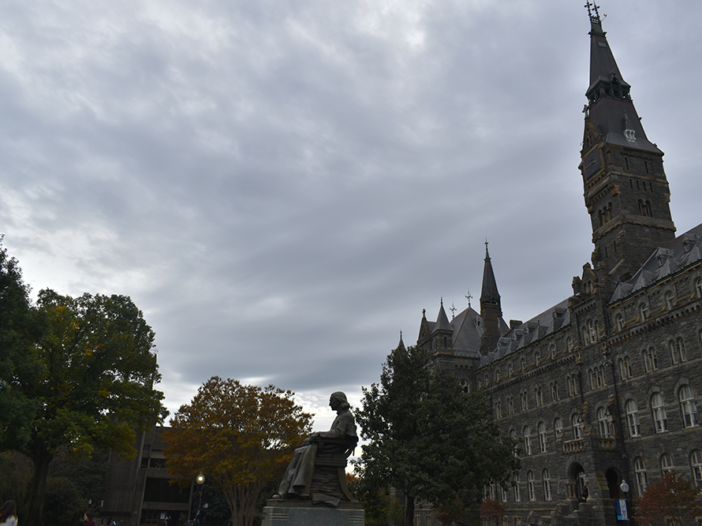 Some Georgetown University students who could not retrieve their belongings after campus closed last spring have reported that many of their items were either lost or discarded by university employees or university-affiliated moving companies.

Several students who lost their belongings told The Hoya they had received emails from administrators months after leaving campus notifying them that belongings they had left behind to put in storage had been lost or thrown out. Others discovered items missing when they opened their storage boxes upon returning to campus for the fall semester. Some students lost items of sentimental value, while others suffered significant monetary losses, which the university has promised to reimburse.

The university did not confirm any connection between the string of incidents. The four incidents documented by The Hoya were spread out across different dorms, although, according to Georgetown University Student Association officials, a cluster of incidents was reported by students living in Isaac Hawkins Hall.

After extending remote learning through the end of the semester in March, the university asked undergraduate students to move all their belongings out of campus housing by March 29, according to a system-wide email from Provost Robert Groves. For students unable to return to campus in the allotted time, the university offered to pack and send one box of essentials to students’ permanent residences. In the email, the university assured students their personal belongings would not be discarded.

Georgetown partnered with Hilldrup, a storage and moving company, to move and store the rest of these students’ belongings until a later date when students returned to campus.

Kerry, a student who did not wish to disclose her last name, stored some of her belongings through Hilldrup when she was forced to return home in March.

After unpacking her boxes from Hilldrup at the start of the fall semester, Kerry discovered many of her possessions — $919.52 worth of items, according to her calculations — were missing.

“These [items] included, amongst other things, all of my spices (30+ from family and from places I’ve traveled), all my toiletries (particularly my makeup, hairdryer, and straightener) and a few other personal items like two custom-made hand towels, several gifted fridge magnets, my 2 shower towels, and a small jewelry holder gifted to me by my Godmother,” Kerry wrote in an email to The Hoya.

After contacting the Division of Student Affairs about her losses, Kerry was directed to file a report with the Office of Risk Management, the administrative department responsible for assessing the university’s liability risks.

“The Risk Management team will review the claim and accompanying documentation and then reach out to university staff to review the specific circumstances of your claim. At the end of the process, they will write back with a final determination, and if reimbursement is offered they will provide details on how you will receive payment,” the email from Student Affairs to Kerry read.

Kerry submitted her report listing the lost items and their estimated costs Aug. 29 and heard back from Geta Wold, a risk analyst at the Office of Risk Management, in an email Sept. 1. The email asked her to provide her phone number, current mailing address and GUID number to complete her file.

The university has worked hard to mitigate the impact of packing and item disposal despite the negative experiences some students have faced, according to a university spokesperson.

“Students were informed that some items, such as open shampoo bottles, food, etc., were not items that could be stored. For any items that were accidentally disposed of during the packing and storage process, the university has been working with students as quickly as possible to reimburse them,” the spokesperson wrote in an email to The Hoya.  “For students who have lost items, we are sorry for the impact this has caused and will continue addressing the matter with our staff and reviewing procedures.”

Another student, who wished to remain anonymous because their case is still being investigated by the university, reported that their belongings were discarded directly from their dorm room sometime in early August.

After the transition to remote learning, the student, who is an international student, moved in with family in Chicago and was given free storage with Hilldrup through the Georgetown Scholars Program. The student returned to Washington, D.C., where they lived on campus for the duration of the summer until returning to Chicago to celebrate Eid, they said in an interview with The Hoya.

The student planned to live on campus in the fall. While quarantining in Chicago before returning to campus, however, they received an apology email from the Director of Residential Services Bill Huff explaining that all of their belongings left in the apartment were discarded when their dorm room was being cleaned.

“He didn’t really explain to me what discarded means, and, until now, they have not explained what it means,” the student said in an interview with The Hoya. “He basically told me that someone was supposed to come in and do what they call a clean around. They were supposed to clean around my stuff, but, instead, it seemed they decided to come in and take everything in my room and discard it and throw it away.”

Since it is still unclear who discarded their belongings, when it happened, and why, the university is opening an administrative investigation through the Georgetown University Police Department in an attempt to uncover more details about their losses.

Some discarded items included deeply personal keepsakes from their life, according to the student.

“A lot of the things my mom bought me when I was going to Georgetown as a freshman. And she just lost her job, and she invested a lot of money in making sure I went to school with enough clothing. So, it’s not just a skirt. It’s a skirt my mom bought when she didn’t have enough money to eat,” they said.

Student experiences were not uniform. Kara Struckman (COL ’22) was notified in May, through an email to her roommate Riley Rogerson (COL ’22), an editor for The Hoya, that personal mementos, including posters and a skateboard, which she and her roommate had accidentally left behind in their Reynolds Hall dorm room and had asked to be put in storage were “no longer in the room and have not been located elsewhere at the university or within the storage containers,” according to emails from the university. Struckman and Rogerson decided against filing a claim, figuring the process would be more trouble than it was worth.

It is unclear who exactly is culpable for the losses because of the variety of student experiences. The university is committed to covering the monetary losses faced by students, GUSA President Nicolo Ferretti (SFS ’21) told The Hoya during a press event. Typically, the university does not insure the personal property of students.

The student returning to campus from Chicago says they received an email from the Office of Risk Management on Sept. 4 in response to their lost items report. They explained that the office tried to lower the values they submitted in their report since costs will be lower during Labor Day weekend sales.

“I was surprised with the way they are taking it. It is very much like I am talking to a lawyer. I honestly lost a lot of money; a piece I bought for $500 is being reduced to $350,” they said in an interview with The Hoya.  “They’re taking the fact that there’s a sale because it is Labor Day weekend and completely changing the price. Next week, it won’t be on sale when I buy the items.”

This is a developing story. Have you experienced a similar situation? If so, please feel free to reach out to The Hoya at [email protected].