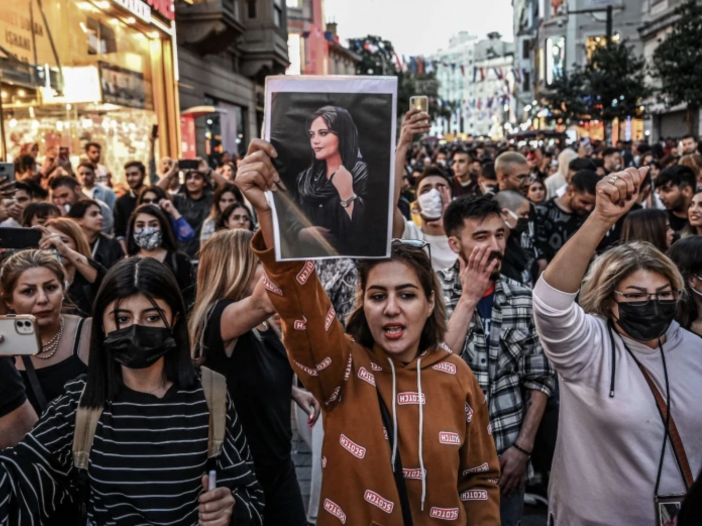 Georgetown University community members gathered in Red Square to show solidarity with Iranian protestors that are under persecution by the Iranian government at a rally hosted by the Georgetown Iranian Cultural Society (ICS).

ICS planned the Nov. 30 protest as part of a worldwide Campus Rally for Iran sponsored by the Iranian Scholars for Liberty, a global coalition of Iranian students, professors and administrators with a mission to amplify Iranian voices. Activists from over 200 universities participated to raise awareness about the human rights violations in Iran that garnered global attention following the death of Jina Mahsa Amini, a young Kurdish woman who died in police custody after being arrested for incorrectly wearing a headscarf in September.

Over 300 civilians have died as a result of protest crackdowns in Iran, and in early November, the UN reported that Iranian police have arrested as many as 14,000 people on protest-related charges.

Protesters stood in a circle, holding up Iranian flags and photos of Amini at the rally. ICS President Nima Majidi (SFS ’23) and Director of Graduate Studies at Georgetown Ali Arab both delivered short speeches, then led the group in chanting “Zan. Zindagi. Azadi,” which translates to “Women. Life. Freedom.”

Arab said it is important to be proactive about spreading awareness of and calling out the human rights violations the Iranian government is committing.

“We can’t stand on the sidelines and watch,” Arab said at the rally.

Ava Joulapour (SOH ’25), another rally co-organizer and ICS student leader, said the rally was personally important to her because she lived in Iran for four years.

“A lot of this hits home for me because I have friends there,” Joulapour told The Hoya. “One of my closest middle school friends got shot, and that was very tough for me.”

Joulapour said she also wanted to raise awareness about the seemingly arbitrary, exploitative and extreme enforcement of Iran’s penal laws.

“Every time they catch you wearing your headscarf incorrectly, they require a charging fee,” Joulapour said. “The third time they catch you, they drag you away. If you are driving, your headscarf is falling, and a traffic camera catches you, they take a picture of your license plate and they literally send you a ticket. It’s a money-making scheme.”

The oppressive punishments of the Iranian government do not reflect Islamic values, Joulapour said.

“It tarnishes the religion in the eyes of the people and around the world, which is very unfortunate,” Joulapour said.

Majidi said what is going on in Iran is especially hard-hitting for the Iranian diaspora, or the population of Iranians living outside Iran, because of their close familial and cultural ties to the country.

“This isn’t a faraway issue for us,” Majidi told The Hoya. “What is a diaspora but a group of people that dream of home, that long for it, that long for a culture, a country, a homeland that they have never had access to?”

Arab said he was impressed with the turnout at the protest.

“The fact that we were able to gather more than 20 people on such short notice is amazing,” Arab said at the rally.

Majidi and the ICS are planning an event in January to raise more awareness for the protests.

Until then, they will continue to champion for fundamental protections for the Iranian people, Majidi said.

“It’s a basic demand for human rights, the right to exist without government interference in every walk of life, whether it be in what women choose to wear, the way Iranians choose to love, the way they choose to express their political beliefs, their religion, their faith,” Majidi told The Hoya. “These are things that have been restricted by the Islamic Republic for the last 43 years, and now is the time for revolution.”