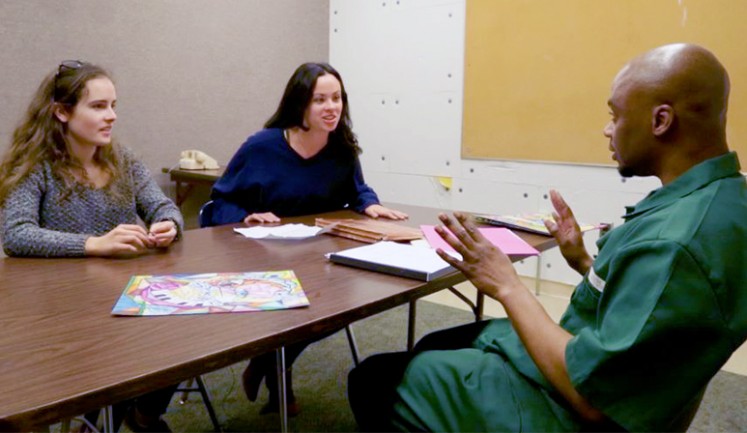 A team of Georgetown undergraduate students and professors helped exonerate Valentino Dixon, who spent 26 years in prison after being found guilty of murder, on Sept. 19.

“The Georgetown students made me a believer that anything is possible — and that justice can be done,” Dixon said in a Sept. 19 news release.

The three students who studied the case, Julie Fragonas and Naoya Johnson, who both attended Georgetown as part of a study abroad program, and Isobella Goonetillake (COL ’18) worked alongside forensic and legal professionals to investigate the case. They produced social media content, a website and a documentary outlining the details of the case and their findings.

Fragonas said the work she did on the case changed her perspective on the criminal justice system and the impact she could have.

“Meeting Valentino and the rest of his family made me understand the power of strength and dedication,” Fragonas wrote in an email to The Hoya. “I think it made me realize the realities of the system. Never will I ever see a prisoner the same from now on.”

The “Prison Reform Project” seminar, taught by Howard and adjunct professor Martin Tankleff, brought together 16 undergraduate students to tackle four cases of wrongful conviction. Tankleff himself is an exoneree and served 17 years for his parents’ murder before his 2007 release. Howard and Tankleff are lifelong friends, and Tankleff’s experience led to Howard’s interest in wrongful convictions and pushed him to begin teaching the seminar.

“One of the reasons I was interested in wrongful convictions is because my childhood friend Marty Tankleff — who co-taught the course with me — was, himself, wrongfully convicted, and I was part of a team that pushed and eventually succeeded in getting him exonerated,” Howard said in an interview with The Hoya. “So, it was very personal, and I really understood deeply how hard it is, how painful it is, for someone to be wrongfully convicted, and how difficult it is to get that person exonerated.”

Tankleff said the opportunity to teach the seminar at Georgetown and participate in the processes of tackling other cases of wrongful convictions is important and meaningful to him. The goal of the class, according to Tankleff, is to produce a successful outcome in all four of the cases studied in the class.

“The ultimate goal would be to get at least one person out, but our goal now is to really have success in all four of our cases,” Tankleff said in an interview with The Hoya. “And we believe this is absolutely possible because we believe that our students, in conjunction with the experts who work on the cases, really uncovered some great evidence.”

Both Howard and Tankleff said the amount of work the students did was extraordinary and showed dedication to the overarching goal of the seminar: to help those who have been wrongfully convicted.

“This was something they invested all of their heart and soul and energy and blood, sweat and tears because they realized that another person’s life was at stake, and they took it really seriously,” Howard said. “They were really fully invested in his case, and that’s what you have to do if you want to get someone exonerated.”

Tankleff said the students, by doing the work necessary to exonerate a person, defied many common expectations about undergraduates’ ability and dedication and highlighted the impact the students’ efforts had on Dixon’s life.

“People said it can’t be done; I think we just proved them wrong,” Tankleff said. “They gave someone their life back, which is kind of incredible.”

One of Dixon’s lawyers, Donald Thompson, said the Georgetown students’ work was instrumental in calling attention to Dixon’s case and providing additional resources and information that were key in his release.

These negative gunpowder residue test results for Dixon were crucial in his exoneration.

Thompson also said that he was encouraged by the investigation done by the Erie County District Attorney’s Office’s investigation that ultimately led to Dixon’s exoneration, and he hopes that this case can serve as a model to other district attorney’s offices looking to improve their handling of wrongful conviction cases.

“If you frankly and without fear search for the truth, no matter whom it hurts or helps, you may get to the bottom of it, and you may be instrumental in righting a wrong,” Thompson said.

Howard said that, although he, Tankleff and the course’s students were thrilled by Dixon’s exoneration, there is still much more work to be done.

“We’re happy, but we’ve got so much more work to do because our criminal justice system is bankrupt, and we’re doing one small part in trying to fix it,” Howard said.