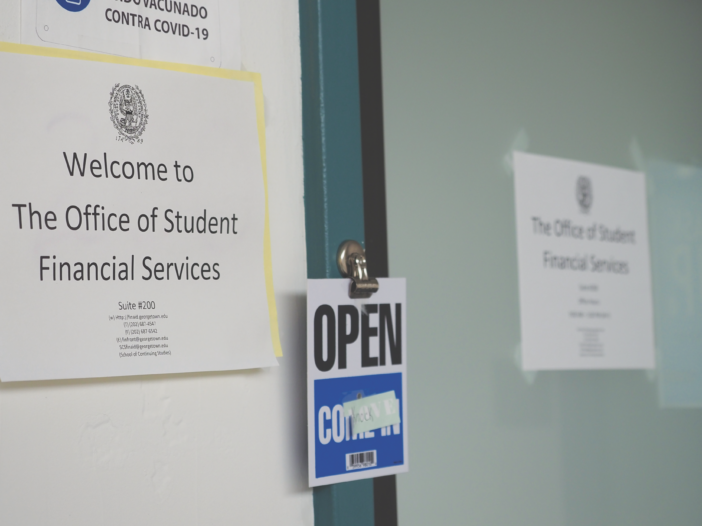 Shortly after being accepted to Georgetown University during her senior year of high school in spring 2021, Nori O’Shea (SFS ’25) opened her financial aid offer. She was surprised to find that the Free Application for Federal Student Aid (FAFSA) estimate of her expected family contribution (EFC) and Georgetown University’s estimate did not match up.

O’Shea soon received several non-Georgetown scholarships, but as she accepted these grants, Georgetown reduced her financial aid package and deemed her ineligible to get a work-study position on campus in fall 2021.

“They started chipping away at my work study and loan options and stuff like that,” O’Shea said. “I was under a lot of stress.”

Later that spring, an outside foundation offered to cover O’Shea’s entire tuition, so Georgetown’s reductions to her financial aid package did not have a major impact. However, her story still underscores the complex ins and outs of the financial aid process that many Georgetown students deal with every semester.

From sporadic financial aid reductions to difficulty communicating with the Office of Student Financial Services (OSFS), students have reported that their experiences with financial aid illustrate that Georgetown’s financial aid system is often dysfunctional, hard to navigate and disadvantageous to low-income students.

In August 2020, the university announced significant reductions to many students’ fall 2020 financial aid packages, causing some students to lose tens of thousands of dollars in aid and prompting backlash from the Georgetown community.

The university responded by revising aid packages before the start of the fall semester, which was virtual because of the pandemic, and restored the aid of many students who faced initial cuts.

“The money that they usually give me for those things in my scholarship package, they took that money away from me,” Scariano said in an interview with The Hoya. “I lost all the extra money that I usually had for the meal plan and the housing, which is about $10,000.”

The university’s shift to virtual instruction caused student costs to change for the fall 2020 semester, according to Dean of Student Financial Services Patricia McWade, prompting the OSFS to alter the financial aid of thousands of students.

“The OSFS had to recalculate need-based financial aid eligibility for several thousand GU students multiple times – something we’ve never had to do before and hope never to have to do again,” McWade wrote in an email to The Hoya.

During the first year of the COVID-19 pandemic, more than 1,000 students requested the OSFS reconsider their financial aid eligibility due to their personal circumstances, according to McWade, with more than 80% of those requests resulting in more aid being offered to the students.

Many students also reported cuts to their financial aid packages for the 2021 spring semester, including students with a $0 family contribution. The university denied that any reductions were made to 2021 spring packages, stating that packages seemed smaller because aid was frontloaded in the 2020 fall semester.

The initial cuts to the fall 2020 financial aid packages followed the university’s July announcement that undergraduate students living off campus would receive a 10% tuition discount. The announcement came after more than 2,000 community members signed a petition advocating for the university to reduce tuition since classes were online due to the pandemic.

The tuition cut, however, did not impact the expected family contribution threshold, meaning students paying full or nearly full tuition saw the most financial benefits from this policy.

The university has continued to increase financial aid for students over the past five years, according to a university spokesperson.

“Georgetown is deeply committed to access and affordability, as illustrated by the 44% increase in financial aid over the last five years, from $180 million in 2017 to $260 million today,” the spokesperson wrote in an email sent to The Hoya.

Students have reportedly faced insufficient aid packages and difficulty communicating with financial aid officers both before and after the widespread financial aid cuts in August 2020, however, saying that financial aid has been a long-standing problem at Georgetown.

Daniella Sanchez (COL ’22), who has received financial aid from the university throughout her four years at Georgetown, said she has consistently faced issues with her aid packages, prompting her to continuously advocate the OSFS for revisions and improvements.

“The way that the administration handles financial aid has impacted me emotionally, academically and socially,” Sanchez said in an interview with The Hoya.

Unfortunately, these organizations, along with first-generation, low-income (FGLI) students, often have to take on the brunt of the work advocating for financial aid reform and improvement, according to Leo Rassieur (COL ’22), Georgetown University Student Association (GUSA) Senate Speaker.

“A lot of the burden on reforming the financial aid process has been on GSP and FGLI activists at Georgetown to point out issues that should have been obvious from the beginning,” Rassieur said.

Financial aid officers consistently work alongside both GSP and CSP to help students receive enough aid, although the process can often be complicated, according to McWade.

The Georgetown administration constantly works to support GSP and the students in the organization, according to Melissa Foy (COL ’03), GSP’s executive director.

“In terms of enough support, I think university leaders endeavor daily to better understand our students and I see those leaders constantly fighting to do the right thing by the students,” Foy wrote in an email to The Hoya.

Students Left in the Dark

In addition to financial aid cuts since the pandemic, five students have told The Hoya about difficulties communicating with Georgetown’s financial aid office when trying to resolve issues.

O’Shea said that the OSFS stopped responding to her emails altogether when she was trying to fix issues with her summer 2021 financial aid package.

“I’d been talking to them for a while,” O’Shea said. “We went back and forth for a little bit, but nothing was resolved, and then everyone in financial aid stopped responding.”

The OSFS works to respond to all student concerns and ensure that all students receive sufficient aid, according to McWade.

“The dedicated and hard-working staff of the Office of Student Financial Services (OSFS) works tirelessly to support thousands of Georgetown students each year,” McWade wrote. “We do this work to help each student meet their unique and personal challenges, and to make sure that financial aid funds are distributed equitably and in compliance with federal and other aid sponsor’s requirements.”

While individual financial aid employees are often helpful in resolving student issues, the office can sometimes be disconnected from students’ actual experiences, according to Gilbert.

“There’s far too large of a disconnect between the people that are making decisions and the people whose lives are affected by those decisions,” Gilbert said. “I’ve had conversations with administration where we bring up very real problems — direct student experiences — and they acknowledge it, and they do feel bad about it, but they just had no idea it was going on.”

Amira Fisher (COL ’24), who said she is still waiting on a refund from the OSFS that she was supposed to get at the beginning of the semester, said that the OSFS’ handling of her financial aid has impacted her social and academic life.

“I’ve experienced so much more stress than I have to, especially because it affects other things,” Fisher said in an interview with The Hoya. “I’ve had to cancel on dinners or things like that because I just physically can’t afford it because I don’t have the money that I was supposed to for the school year. Another one, more academically, is that I wasn’t enrolled in a class I realized after the add-drop, and I couldn’t actually go to register and ask them to change it because I had a hold on my account because of the whole ordeal with my financial aid.”

Sanchez has also faced difficulties with the OSFS; in the fall of her first year, Sanchez said she visited the OSFS to negotiate her financial aid package. However, she left only with more concerns.

“I was literally tearing up. I thought I had lost it all, and I was like, ‘Was it because I tried to advocate for myself?’” Sanchez said. “The policies and process they had to follow made me feel like I’m afraid to get my package reevaluated.”

Outside of Georgetown, financial aid and need-blind admissions have occupied a central role in discussions about elite schools, following a lawsuit filed Jan. 9 alleging that several schools, including Georgetown, engaged in price-fixing to limit financial aid.

Former students accused Georgetown, alongside 15 other top schools including Yale, Columbia and Brown, of colluding to limit financial aid. The class action lawsuit alleges that the schools collaborated to reduce or eliminate pressure to offer more competitive financial aid packages than one another.

Georgetown University describes itself as a need-blind, meet-full-need institution, meaning it does not consider financial need when making admissions decisions. The university offers financial aid based on students’ demonstrated need and pledges to meet full need, according to the Office of Undergraduate Admissions’ Financial Aid website.

However, the lawsuit offers evidence from the past two decades that suggests these schools may instead be pursuing need-aware processes.

“On the fundraising side, we also have a small number of ‘development potential’ candidates. If Bill Gates wants his kid to come to Georgetown, we’d be more than happy to have him come and talk to us,” Deacon told the outlet. “But not all those special cases end up being people who give a lot of money. We have children of Supreme Court justices, senators, and so on apply. We may give extra consideration to them because of the opportunities that may bring.”

Deacon’s comments prove that the university takes finances into admission consideration, according to the lawsuit.

“In short, Georgetown admits a range of students based on their families’ wealth, prestige, and influence,” the lawsuit reads.

Furthermore, Deacon told The Hoya in 2015 that financial status can play enough of a role in admissions to “tip” students over the edge.

The lawsuit aims to help students affected by the lowered aid, according to Robert D. Gilbert, managing partner at Gilbert Litigators & Counselors, one of the firms representing the plaintiffs in the lawsuit.

“We have conducted a substantial investigation of these practices, which we allege are unlawful, and we plan to vindicate the rights of more than 170,000 financial aid students and their families whom we believe have been overcharged by these elite universities,” Gilbert told The Hoya.

The university declined to comment on students’ negative reactions to the lawsuit.

The lawsuit demonstrates Georgetown’s broader failure of the administration and the admissions process to support low-income students, but it was not necessarily unexpected, according to GUSA Senator Nirvana Khan (SFS ’24).

“This doesn’t feel shocking — partly because low income students intuitively expect that the admissions process isn’t fair to us,” Khan told The Hoya. “I don’t think it was a surprise to anyone.”

This article was updated March 25 to include an additional comment from a university spokesperson.