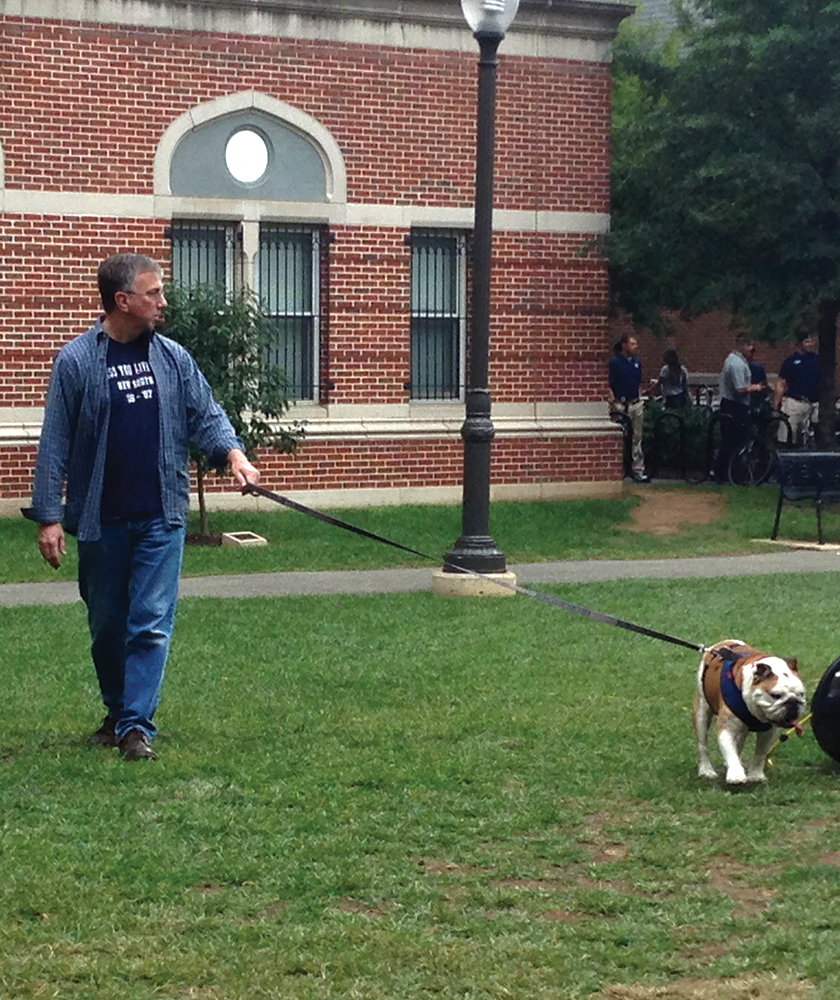 Although university administrators assured students and alumni that the mascot tradition would continue after the departure of mascot-in-training Jack Jr. this summer, one aspect of the next bulldog’s role on campus will be different: his caretaker.

Fr. Christopher Steck, S.J., will not care for the new mascot, despite doing so for last 10 years, including the year and a half when Jack Jr., or J.J., was on campus.

In August, the university announced the selection of a new bulldog, born June 29. The Bulldog Advisory Committee has regularly met to discuss the approach to be taken with the new dog. The question of a timeframe for the arrival of the bulldog remains unclear. After J.J.’s abrupt removal from campus, the committee is trying to ensure a smooth transition for the new mascot.

“My initial suggestion was that the puppy be housed in New South with me, and that a senior, chosen competitively, be given a paid, intern-like role in which he or she would take on significant responsibility for the new mascot,” Steck wrote in an email. “I would need help if I were to take on the role of caretaker again, and I thought that a responsible, dog-loving senior would be ideal.”

These suggestions were rejected by the university.

“The university felt that it would be better to find a more permanent person — seniors would change every year — who would be able to take on all of the responsibility for the role of mascot caretaker,”Steck said. “Doing so would simplify the position.”

It is unclear exactly to whom the application would be open, though Steck suggested the caretaker need not necessarily be a Jesuit or a faculty member.

“I don’t think there are any constraints on what role the person will have at the university, if any,”Steck said. “I believe the ideal would be that the person has some sort of employment at Georgetown so that they could bring the new mascot to their offices, and allow him to be seen regularly on campus. It would also be important that the caretaker be committed to living near campus for the duration of the dog’s life as a mascot and having a permanent position at Georgetown would facilitate that.”

Director of Media Relations Rachel Pugh said that a new caretaker will be selected in the next few weeks.

“I think that the thing is we’re really still working on how we will be evaluating that person,” Pugh said. “I think we’ll know when we meet that person and they’re the right fit.”

The new mascot’s caretaker would be offered a townhouse on 36th Street with a backyard for the dog, according to Pugh. If the caretaker already lives on campus, it could be possible for the mascot to live in a dorm, as Jack does with Steck.

The BAC has developed a formalized application but has yet to complete a job description. Once that is complete, the committee will post the job and solicit applications, with an interview to follow.

Though aspects of the caretaker role remain undecided, the mascot’s role is clear.

“As far as the mascot tradition goes, we’re not planning anything new in the mascot’s specific responsibilities,” said Neve Schadler (COL ’15), head of the Jack Crew. “We’re making sure anything new is an improvement, so the responsibilities as far as right now will be the same. He’ll have walks around campus, and as he grows we’ll be doing public appearances.”

The Jack Crew works closely with Steck, and crew members would need to transition to working with the new caretaker.

No one on the BAC has met the bulldog, which comes from the same breeders who donated J.J.: Janice and Marcus Hochstetler, parents of former Georgetown students.

The new mascot will be named Jack, but a nickname has yet to be determined.

While the breeders have already begun to train the new dog, training will continue on campus, according to Georgetown University Student Association Vice President Adam Ramadan (SFS ’14), who serves on the BAC.

“I would love to have him immediately,” Ramadan said, “but for the sake of tradition, the puppy himself and making sure he’s comfortable, we’re just taking it step by step and making sure we’re not doing anything to jeopardize the process.”