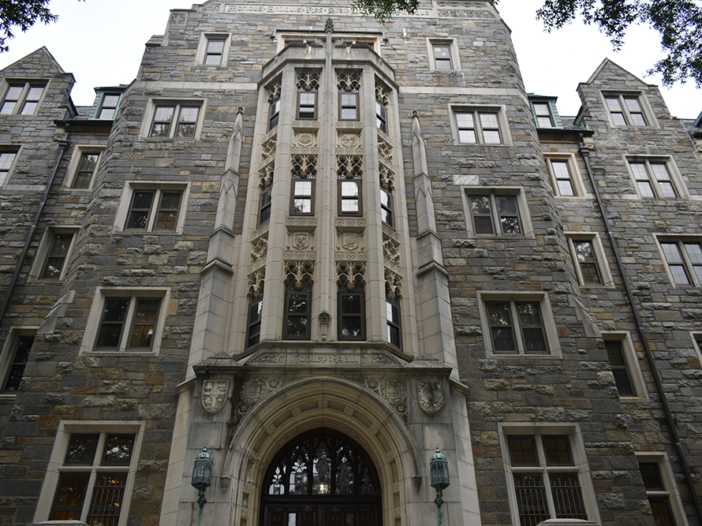 Georgetown University Campus Ministry approved a proposal this month to create the Dharmalaya, the first consecrated multi-Dharmic space on a U.S. college campus, which is set to open by spring 2020.

The Dharmalaya will be dedicated to all Dharmic traditions, including Hindu, Buddhist, Jain and Sikh practices, according to Brahmachari Sharan, director of Dharmic Life and Hindu spiritual advisor. The new space will be established in the former location of the Muslim Prayer Room in the Copley Hall basement.

The Dharmalaya will be used for small student groups, classes, reading groups, meditations and traditional Dharmic observances, according to an email Dharmic Life sent to students in its newsletter Oct. 25. Fundraising for the new Dharmic space is still ongoing, and the Dharmalaya’s official opening is projected for the end of next semester, according to Sharan.

The new designated space on campus will help the representation of Dharmic tradition at Georgetown while also benefiting the larger Georgetown community with individuals of all faiths able to utilize the space, according to Hindu Student Association President, Darshil Shah (MSB ’20).

“The fact that a space like this exists on a Jesuit campus serves a huge purpose to all students over here, especially those that identify as Hindu or Jain or Buddhist or Sikh,” Shah said. “I think it’s a good disconnection for the rest of campus as well. If you ever find you need a place where you want to go and just sit down, relax and be peaceful, I think that’s what this place is going to serve to do.”

Dharmic Life activities and services on campus are currently held in Makóm, the Jewish gathering space in the Leavey Center. Sunday night Āratī services, a Hindu practice featuring meditation, are Dharmic Life’s most popular services with around 70 community members attending each week, according to Shah. The Āratī services may continue to be held in Makóm, but other smaller religious functions will be designated for the Dharmalaya because of space limitations.

The creation of the Dharmalaya represents the Georgetown community’s focus on understanding other religions and cultures, Sharan said.

“I think it represents Georgetown’s earnest desire to understand more about the world, starting with understanding its students,” Sharan said in an interview with The Hoya. “I know that there are many things that the university could improve, and I hope that this is one step in the right direction.”

Although the Dharmalaya proposal was approved earlier this month, the Hindu Student Association has been advocating for the creation of a distinct space for Dharmic traditions since 2010, according to Sharan.

“They came up with the idea of a Dharma meditation room, in which shrines honoring Jain tradition, Buddhist tradition, Hindu tradition and Sikh tradition would be included,” Sharan said. “This part of the project has been more of a recent, final kind of finishing on it, but in terms of the desire for the room, it’s been something that’s been around since at least 2010.”

Last semester, the Campus Ministry group previously known as Hindu Life was renamed to Dharmic Life to be more inclusive of all Dharmic faiths, Sharan said. Since the creation of Dharmic Life, smaller Dharmic tradition student groups have had increased access to resources and have gained a larger presence on campus, according to Buddhist Student Association Co-President Anna Naiyapatana (SFS ’21).

“The Buddhist Student Association used to be very small and doesn’t have a chaplaincy to really assist them with their promotions or their activities in the same way that bigger groups have access to,” Naiyapatana said. “By creating this Dharmic Life community, now kids who belong to other religious minorities who fall under this category also have a voice and support.”

“The spiritual traditions of the Dharmic traditions, they are only ever going to be meaningfully accessible if there is an authentic representation on campus,” Sharan said.