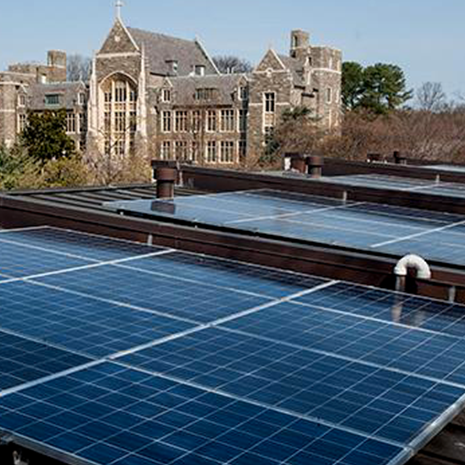 Georgetown University announced a new 15-year Power Purchase Agreement under which the university will source two-thirds of its energy needs through energy produced by solar panels, marking the first time the university has ever sourced energy directly from off-site solar facilities.

The agreement will allow the university to purchase 100,000 megawatt-hours of power annually from 11 plants located in Maryland and New Jersey, according to an Oct. 29 news release. In the news release, Chief Operating Officer Geoff Chatas said the transition to this PPA will lower the university’s operating costs.

Peter Marra, a professor of biology and the environment and director of the Georgetown Environment Initiative, said he is pleased with the steps the university has taken to become more sustainable and believes the administration is serious about sustainability efforts.

“I am very happy with what Georgetown has been doing. The COO, the Office of Sustainability, and the GEI are all committed to a green Georgetown and reducing our environmental footprint. Divesting from fossil fuels and sourcing power from solar are just the beginning,” Marra wrote in an email to The Hoya. “I think in the coming years the Georgetown community will be surprised at how seriously the administration is taking our environmental challenges.”

Before the agreement, the university had purchased Renewable Energy Certificates for 100% of electricity needs since 2013. RECs show that the university owns a megawatt of renewable energy even if the energy used by the entity technically came from fossil fuels. Under the new PPA, the university will source energy directly from the renewable facilities.

In 2019, the university originally planned to construct a solar panel plant located in rural Maryland, which would have required destroying trees on 210 acres of land. However, environmental activists voiced their opposition, and the university reversed course. Under its new plan, Georgetown will instead purchase electricity from solar plants while continuing to purchase RECs to ensure that all of its electricity is 100% renewable.

Sourcing power from solar panels follows other recent efforts made by Georgetown toward sustainability. Notably, the university was named the top renewable energy college campus in a national ranking Aug. 19 for its recent sustainability initiatives.

Additionally, the university committed in February 2020 to divest from fossil fuels over a 10-year period and has installed 800,000 square feet of LEED-certified buildings on campus. The university has also improved environmental studies on campus with a new environmental studies minor, a new Certificate in Sustainable Business and new courses on climate change through the Core Pathways program.

Student activism – including the creation of the student-run campaign GU Fossil Free that pushed and passed a studentwide referendum asking for the university to divest from fossil fuels in February – has played a large role in advancing the university’s commitment to sustainability.

The student-led Green Renewable Energy and Environmental Network expressed appreciation that students were invited by the administration to participate in the process of forging the new agreement in the university’s Oct. 19 news release.

Victoria Boatwright (COL ’22), president of GREEN, said the new contract can set a precedent for students and administrators to collaborate on future sustainability projects.

“Much of Georgetown’s environmental progress has been the culmination of student advocacy, and I’m looking forward to what a stronger partnership between students and administrators will lead to,” Boatwright wrote in an email to The Hoya.

Boatwright also hopes the new initiative will make students more aware of the importance of advocating for sustainable energy sources.

“In terms of energy use, I hope that the University will establish new guidelines on energy use and further educate all students on the importance of investing in a green future,” she wrote.

Audrey Stewart, director of Georgetown’s Office of Sustainability, said she is thrilled with the community enthusiasm and will continue to seek its involvement in future projects. The university has begun looking into ways to achieve 100% renewable energy usage by exploring options for renewable energy sources to heat buildings and to transition the university’s fleet to electric vehicles, according to Stewart.

“Our approach seeks to be inclusive of all members of our university community and all our physical campuses, both across D.C. and around the world,” Stewart wrote in an email to The Hoya. “We seek to positively impact the external communities and partners with whom we work and to meaningfully and materially improve the planet we call home.”

Marra hopes more steps will be taken to make campus sustainable, including reducing food and plastic waste, sourcing greener energy for campus buildings and reducing rainwater runoff for improved biodiversity. He expects the environmental studies minor will become a major in the future.

“I want to see Georgetown thought of as a destination for students who want to learn about all things environmental — from the arts to policy to science,” Marra said.

This article was updated Nov. 17 to correct several small details about the university’s solar power initiatives