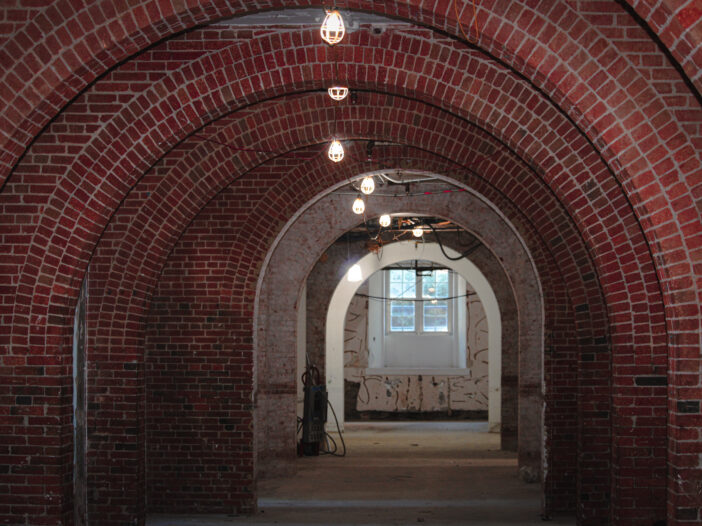 Construction is already underway for GSP, which provides support for first-generation and low-income (FGLI) students. The new 2,300-square-foot space will include a student lounge, several work spaces, private offices for meetings, a kitchen and a storage space. The renovated ground floor will also hold a brand-new well-being space for students to participate in health and wellness programming and a gathering space for students involved with Catholic ministry. Construction will be finished by Fall 2023.

GSP Student Board President Sofia Chen Ma (MSB ’23) said she envisions the new space to be the core of the GSP community.

“When you think about what the space is going to look like, it’s not an office space, it’s not a center, it’s a community hub for GSPers to gather together,” Chen Ma told The Hoya. “For us, it was a long time coming.”

The new space will allow the program to better support first-generation college students, according to Missy Foy, executive director of GSP.

“This project also provides an opportunity to think about how to provide our first generation college students a distinct community space, while leveraging the opportunity for our students to casually meet students from a variety of backgrounds, which can be crucial for students’ development,” Foy wrote to The Hoya.

In January 2021, the Georgetown Office of Student Equity and Inclusion planned to move the program’s space from its original location in Healy Hall to an office in New South Hall.

However, university officials found structural concerns in New South in July 2021, resulting in GSP’s relocation to the fourth floor of the Leavey Center. These changes were announced to the public August 2021, sparking outrage among community members. After nearly three months of protests from students and alumni, the university announced that the program would return to Healy Hall.

“The student hub would be that space for students to be a sanctuary that wasn’t created on the confines of privilege, but its mission and its intention was for students like us,” Chen Ma said in an interview with The Hoya. “Getting that space back for us to be able to build community to be able to be who we are and claim space, I think is important.”

Chen Ma said before the COVID-19 pandemic GSP’s office fostered a community she felt safe in, something she is looking forward to having again with the new office.

“It was just a very gathering space where you can just go and hang out and not have anything to say and still be welcomed,” Chen Ma said. “It felt very relieving for me, because I can just be myself. I can just come to this space and be who I am meant to be, and just talk to people and get to know people on a more intimate level, and talk about real things, and I met a lot of my closest friends.”

Lisa Kennedy (COL ’25), who is a GSP storyteller, or someone who records the history of GSP’s work, is looking forward to having a physical office space.

“I didn’t get to experience the sense of community that having that office creates,” Kennedy said in an interview with The Hoya. “It’s a safe space for GSP students where they can really feel supported by campus staff, and of course there’s unique struggles that first-gen low income students face that can’t be adequately addressed without having that space.”

Architects are working with GSP members to incorporate student input into the planning of the space, Kennedy said.

“They’re really trying to factor in student voices, GSP student voices and GSP student leader voices when they’re developing the student office,” Kennedy said. “They’ll be doing focus groups in the coming months to solicit student opinions and voices, and GSP staff’s opinions on what this new space should look like, and how we should organize it because we will be sharing the space with other campus organizations.”

Chen Ma said she is excited to return to the space she and many other people fought for GSP to be in.

“We know we have the option to go other places, but I think we had so much support from other people that I think it was like we were right on sticking by our gut and saying this is the space that we want to be at, and fighting for that,” Chen Ma said.