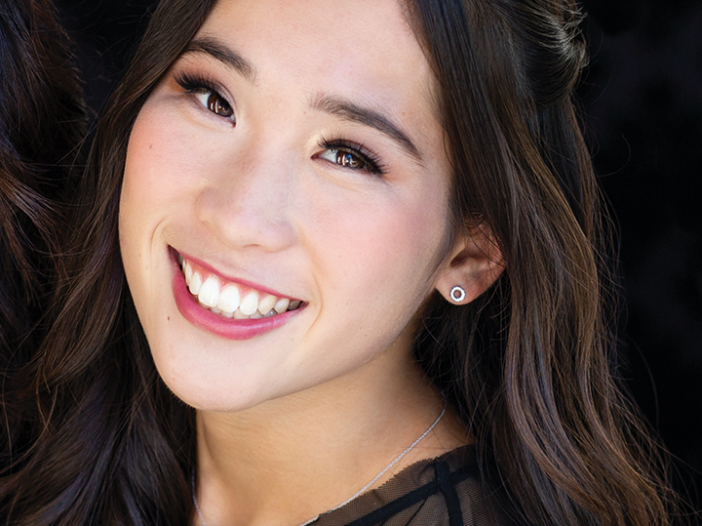 Growing up, Amanda Yen (COL ’23) spent the ride to school hunched over her notebook in the back seat of the car, scribbling down stories that filled the pages. Her passion for writing endured, and now one of her pieces is included in an anthology of fiction for young adults.

Last fall, Yen received an email from the Canyon Crest Academy Writers’ Conference, an annual gathering of high school students from across San Diego County, Calif., founded in 2012 to help students write, publish and produce written work, calling for short story submissions. Yen sent in a sample of a 250-word piece of flash fiction she started working on when she was 17. The piece was accepted and published in “The Sky’s The Limit,” an anthology of stories for young adults.

The piece, titled “We’re Not Like Those People,” is set in the suburbs of California in the 1970s and is told from the perspective of a suburban housewife who is confronted with questions about her own cultural assimilation as a child after a family of Chinese immigrants moves next door, according to Yen.

After three years away from the piece, Yen was first reminded of her story when she was assigned to write a cultural text for a final project at Georgetown University in her “Origins and Identities” course, a part of her American studies major. As she was growing up, writing was a side hobby, but Yen saw the project as an opportunity to do something more with her passion.

“All my creative writing has sort of happened on the side,” Yen said in a phone interview with The Hoya. “It would be one night: I would just start writing a piece, and then I would put it away for a while.”

For Yen, long-form creative writing serves as a way to explore her own experiences and her family’s history, half of which has lived in the United States for generations and the other half for much less time in her stories. Writing is also an opportunity to incorporate learning in the classroom with life experiences, according to Yen.

In the years since she was 17, Yen’s new experiences and perspectives helped her reshape the piece to draw on her Asian American family members’ experiences as immigrants to the United States. Revisiting the story two and a half years after its initial conception was exciting and revealing, according to Yen.

All proceeds from the anthology’s sales will go to Village of Promise, a San Diego County nonprofit that supports middle and high school students who have at least one incarcerated parent, according to a Facebook post by CCA Writers’ Conference.

Reading Yen’s work in a publication was exciting for her peers, because it was a chance to see something that had once been classwork published for a broader audience, according to Olivia Duff (COL ’23), a student in Yen’s American Studies cohort at Georgetown.

“The interdisciplinary and individualized nature of our major encourages thinking outside the box and taking risks wherever possible, so it is no surprise that Amanda’s piece is brilliant,” Duff wrote in an email to The Hoya.

Now that Yen has seen her work published, she hopes to continue to write creatively and encourages other young writers to submit their own work.

“Just keep writing, and don’t be afraid to put your writing out there,” Yen said. “It’s easier to not submit a call for applications than it is to actually get your act together, put something together and put it out there. So, I would say, believe that your writing is worth it.”