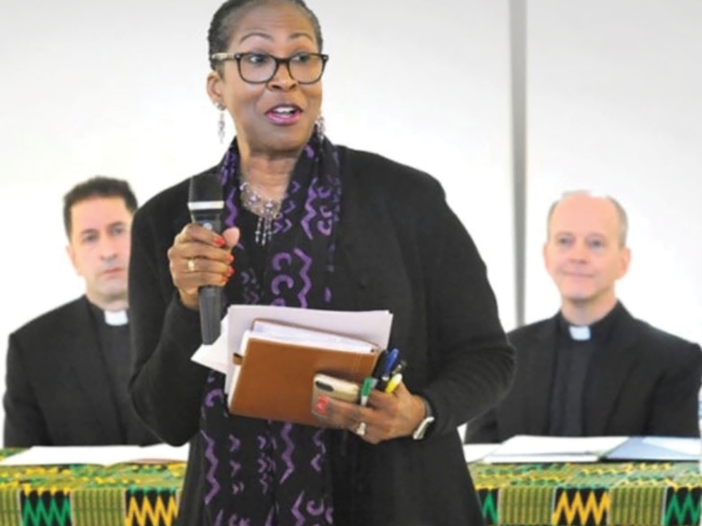 Georgetown University has contributed funding to a new foundation that will fund racial healing programs and award scholarships to descendants of the 272 enslaved people sold to keep Georgetown open in 1838.

The foundation, titled the Descendants Truth & Reconciliation Foundation, was a collaborative effort created by descendant leaders and leaders from the Jesuit community. The university has already provided $1 million to the foundation, according to a March 16 community wide email from University President John J. DeGioia (CAS ’79, GRD ’95).

In 1838, Jesuits from the Maryland Province of the Society of Jesus sold 272 enslaved people, referred to as the GU272, to plantations in Louisiana in order to financially support the university. In the past several years, Georgetown students and community members have advocated for the university to provide reparations for the GU272 descendants to reconcile with the institution’s history of slavery.

The university began meeting with three members of the descendant community to discuss a reconciliation process in 2016, a year after DeGioia created a new working group on slavery. The meetings also followed student protests after the reopening of a building named after a former Georgetown president involved in the sale of enslaved people.

Ultimately, the vision for the foundation came from the three descendant leaders involved in creating the foundation, including Joseph Stewart, Cheryllyn Branche and Earl Williams Sr., DeGioia wrote.

“It became clear through the Dialogue process that the establishment of a shared vision for a Foundation was a first priority for Descendant leaders in the steps toward reconciliation,” DeGioia wrote in his email. “We sought to honor this commitment to dialogue between the Descendants and Jesuits and to provide support as we engaged in the work of confronting historical and present-day aspects of the history of enslavement and the lived experiences of members of the Descendant community.”

Of those funds, the foundation’s leaders have decided to distribute about half its annual budget to organizations engaging in racial reconciliation initiatives, with a quarter of the budget allocated to supporting educational opportunities for descendants through scholarships and grants, and a smaller portion to addressing the emergency needs of older and impoverished descendants, according to The New York Times.

In recent years, students have pushed Georgetown to provide more support for GU272 descendants to reconcile with the university’s history. In a 2019 student referendum, two-thirds of students voted for the implementation of a $27.20 semesterly fee in students’ bills as a reparations fee to be allocated to descendants. University administrators announced later that year, however, that it would instead establish a fund for GU272 descendants instead of implementing the $27.20 fee. Georgetown will provide roughly $400,000 annually to this fund, which is separate from the Descendants Truth & Reconciliation Foundation, to help support community-based projects to benefit the descendant community, according to DeGioia’s March 16 statement.

The GU272 advocacy team could not be reached for comment by the time of publication.

Georgetown is set to begin distributing grants from its separate $400,000 fund by the end of this year, according to a university spokesperson.

“Our aim, working with members of our community and the Descendant community, is to provide our first grants this year,” the university spokesperson wrote in an email to The Hoya. “We will work with students, faculty, staff, alumni, and Descendants on nexts steps.”

The GU272 Descendants Association is a nonprofit organization dedicated to supporting the goals, objectives and aspirations of the GU272. The association was established and is operated by GU272 descendants.

Not only should more funding be allocated to descendants, but Jesuit leaders should not be involved with the board, according to Kenneth Royal, who is Karran’s husband, a descendant and a member of the GU272 Descendants Association.

“I don’t think it’s fair for the Jesuits to sit on a board and then say that half of the money we’re going to give to you, you’re going to have to use it to take care of a problem that you cause,” Kenneth Royal said in a phone interview with The Hoya. “It makes no sense. All of this money should go for the descendant people. It’s just the way that everything was done, it just, this is not good. Not at all.”

However, by supporting racial reconciliation initiatives, the foundation will hold the Jesuit order accountable, according to Stewart, who was recently appointed as the president of the Descendants Truth & Reconciliation Foundation.

“We now have a pathway forward that has not been traveled before,” Stewart told The New York Times.

In the long term, both descendant and Jesuit leaders aim for the foundation to raise $1 billion for descendants, according to Joseph Ferrara, Georgetown’s vice president and chief of staff. Ferrara represents the university on the foundation’s board.

“It was the Descendants’ powerful and transformative vision that drove the creation of the foundation,” Ferrara wrote in a March 15 news release from the university. “This is the beginning of a new and meaningful phase of work as we continue the journey, and we hope and believe that other institutions will join us in supporting the new foundation.”

Update: This article was updated March 26 to fix an incorrect statement that said that Georgetown would begin distributing grants from the Descendants Truth & Reconciliation Foundation by the end of this year. Georgetown will be distributing grants from its own separate $400,000 fund dedicated to support community-based projects that benefit the descendant community.

Update: This article was updated April 16 to reflect the foundation is receiving funding from the university but was not created by the university.