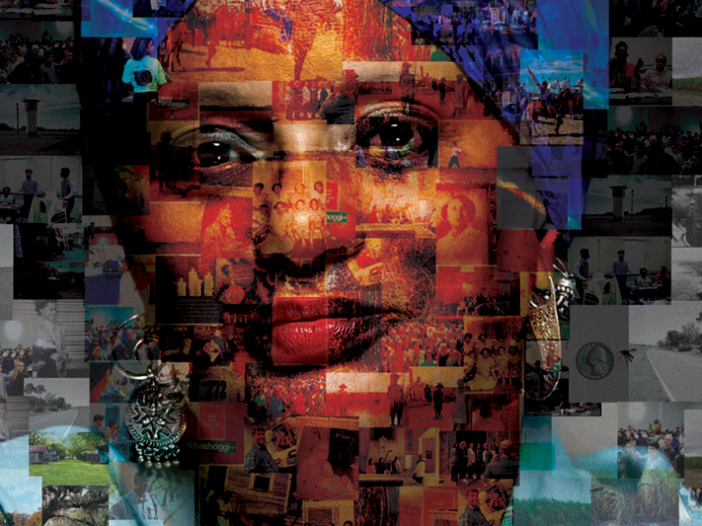 In 2017, at the age of 63, Mélisande Short-Colomb began unpacking her belongings into the Copley Hall suite that would become her home for the next two years. Looking out of her dorm room window, she had a clear view of the Jesuit Community Cemetery on Georgetown University’s campus.

Buried in the graveyard is Fr. Thomas Mulledy, S.J., who authorized the sale of 314 enslaved people to a Louisiana plantation in 1838 while serving as the provincial of the Maryland Jesuits, and he later served as Georgetown University’s president. Among the 314 people sold were Abraham Mahoney and Mary Ellen Queen, two of Short-Colomb’s direct ancestors.

Short-Colomb came to Georgetown as a student to share the story of how her ancestors were sold to fund the university, sent to Louisiana and left to be forgotten from history. After four years at Georgetown, two of which were spent as a student, her journey has led her to a one-person, autobiographical performance titled “Here I Am,” which is a personal interrogation of the university’s institutional mythologies surrounding the sale of the group now known as the GU272, according to Short-Colomb.

The play, which premiered virtually on YouTube on April 15, is based on a script Short-Colomb wrote over the course of 18 months. Since the premiere, Short-Colomb has virtually performed “Here I Am” live from her apartment in Washington, D.C. four times, including one preview performance and three formal shows, to a global audience.

Short-Colomb wrote and performed “Here I Am” with support and funding from Georgetown University’s Laboratory for Global Performance and Politics, a joint initiative founded in 2012 between the School of Foreign Service and Georgetown College that aims to use the power of performance to humanize global politics.

“Here I Am” is a living, breathing example of The Lab’s mission, especially with the goal of creating a space for the creation of original productions that engage with current issues through the emotions of performance, according to Cynthia Schneider, one of The Lab’s co-founders.

“I believe that this performance, this personal story, which is in so many ways a global story, can touch people in a way that something purely political cannot and hopefully can then provoke a reconsideration, can provoke deep conversations and real reflection on the legacy of slavery — both at Georgetown and in the United States generally,” Schneider said in a phone interview with The Hoya.

Though Short-Colomb arrived at the university ready to share her ancestors’ stories in an effort to redefine the legacy of Georgetown’s founding, “Here I Am” did not first take form until she registered for the course “Performance, Memory and Witness.”

The course, taught by co-director of The Lab and professor of theater and performance studies Derek Goldman, allows students to develop the skills necessary to perform personal and biographical stories that engage with memory as a living force, according to Goldman.

Goldman can draw a straight line from the stories Short-Colomb shared in his class to the development of “Here I Am,” he said in a Zoom interview with The Hoya.

“It was those early moments where she would bring in things that were handwritten on her yellow pad and share them with that relatively small group of students, and people were just kind of holding their breath with the kind of power of what she was carrying,” Goldman said.

For Short-Colomb, though she had never starred in her own play before, transitioning her story to the stage felt like just another way to share a story she knew people needed to hear.

“I was born for the stage, and that is how I have lived my life,” she said. “The whole world is a stage, and we are all daily choosing the part we play. So I wrote a script, and I did a project. That is what ‘Here I Am’ means.”

While Short-Colomb was working with The Lab in 2019, Georgetown university students voted overwhelmingly in favor of adding a $27.20 semesterly fee in students’ bills to create a fund that would be distributed to descendants. Later that year, however, university officials announced Georgetown would instead create its own fund for descendants and contribute $400,000 annually to the fund to help support community-based projects to benefit the descendant community. The university’s decision to act separately from the student referendum prompted community backlash.

As much as “Here I Am” is a personal testimony, the show is also meant to recognize and remember the Georgetown student activism that created the GU272 referendum, according to Short-Colomb.

“We have a convoluted history that has been told by enslavers always,” she said. “The referendum was about creating institutional memory in the foundation of Georgetown students’ undergraduate education. To say that it happened before you got here is an abdication of responsibility because it’s happening now.”