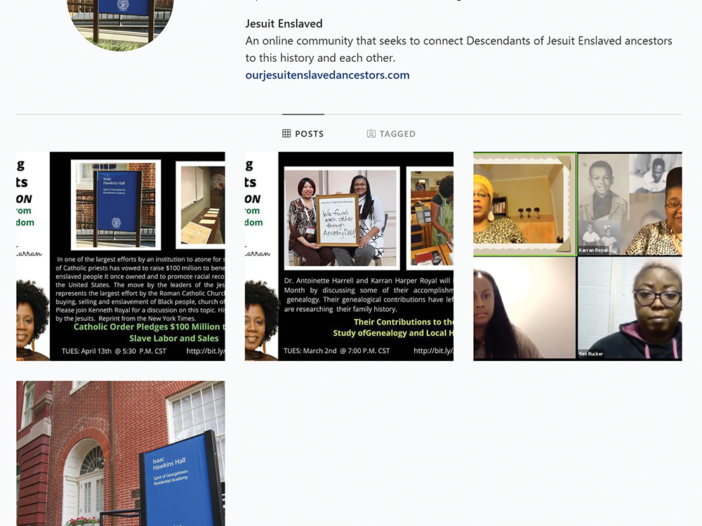 Every Thursday night, Karran Royal sits down at her computer, logs onto Zoom and meets with fellow descendants of people enslaved by Jesuits in Maryland almost 200 years ago. In her free time, she films YouTube videos and writes social media posts to share with the descendant community.

Amid the COVID-19 pandemic, members of the GU272 Descendants Association and other descendants of the 272 enslaved people sold by Georgetown University in 1838 have been connecting through Zoom and have launched various social media platforms to build a community and foster support for each other.

The COVID-19 outbreak last March created an opportunity for descendants to connect virtually, according to Royal, who previously served as the executive director of the GU272 Descendants Association.

“During the pandemic, I wanted to still be able to connect with descendants,” Royal said in a phone interview with The Hoya. “I decided to create an online presence so that descendants can connect up with each other. Our main focus is connecting to this history and figuring out how we connect to each other. So we do a lot of reviewing of DNA connections and family tree connections, just to find out how we are connected to each other.”

The GU272 Descendants Association, a non-profit organization that works to support the descendants, has organized events for descendants to interact in the past, including a 2018 reunion that brought about 500 descendants together. While Royal is no longer employed by the association, she has continued to organize similar events in a virtual environment.

Royal, who got involved with GU272 Descendants Association because of her and her husband’s connections to people enslaved by Jesuits in Maryland, wanted to use the relationships she built to help maintain and grow a sense of community. In July, after she had stopped working for the GU272 Descendants Association, Royal created social media accounts across various platforms, including Instagram, Twitter and Facebook to share resources with descendants, facilitate meetings and spread awareness to others.

“There are many twists and turns to the story of our . @JesuitEnslaved ancestors. The separation of families is vast. We know from where our DNA connections are leading us,” a March 21 tweet reads.

The group of descendants has uncovered several previously unknown facts about Jesuit enslavement in the United States, according to Royal.

“One of the things we found out about that we didn’t know prior to this is that the Jesuits had enslaved people in Kaskaskia, Illinois,” Royal said. “We knew about the Maryland ones, we knew about Missouri and Kentucky, but we didn’t know about Illinois.”

Jesuits from the Maryland Province of the Society of Jesus sold 272 enslaved individuals, referred to as the GU272, to plantations in Louisiana in order to financially support the university in 1838. In the past several years, Georgetown students and community members have advocated for the university to provide reparations for the GU272 descendants to reconcile with the institution’s history of slavery.

In a 2019 student referendum, students voted for the implementation of a $27.20 semesterly fee in student bills to be allocated to descendants. Despite the vote, university administrators announced later that year the university would instead establish a fund for GU272 descendants as opposed to implementing the $27.20 fee. Last week, the university announced the creation of The Descendants Truth & Reconciliation Foundation, which will distribute grants to fund descendants’ academic aspirations, support racial reconciliation programs across the United States and provide direct relief to impoverished, elderly and infirm descendants, according to the foundation’s website.

The university is working to foster further interaction between descendants of people enslaved by Jesuits and the Georgetown community through campus visits, events and research, according to a university spokesperson.

“Georgetown is committed to an ongoing process of dialogue and engagement with Descendants of the people enslaved by the Maryland Province of the Society of Jesus,” the university spokesperson wrote in an email to The Hoya. “This engagement has included meeting with Descendants in their hometowns and welcoming them to campus, group visits to historical sites, archival and genealogical research, and hosting and attending cultural events.”

Connecting with other descendants and gaining access to resources has allowed descendants to trace their family trees, which has been incredibly valuable, according to Kenneth Royal, Karran’s husband and a descendant of Isaac Hawkins, Biby Mahoney and Nace Butler, all of whom were among the slaves Georgetown sold.

“It’s been very interesting,” Kenneth Royal said in a phone interview with The Hoya. “I never thought that I would be able to trace my dad’s family back as far as I have now with this new information we got.”

While Kenneth Royal has been able to identify his family tree, Karran Royal has not, she said.

“We have not identified my connection to the descendants of Jesuit slave ancestors,” Karran Royal said. “But my husband and I share some of the same Maryland cousins, some of whom are descendants, so this is probably just a matter of time before I figure my connection out.” Beyond the family history and the broader historical findings, the group has been able to connect in a very meaningful way, according to Karran Royal.

“It’s been really a sense of building community,” Royal said. “We’ve met these cousins a few times now, and now we get to continue to interact and talk to them, see them on a weekly basis. Some people are not even seeing their close family members that often. It’s just really a sense of community.”