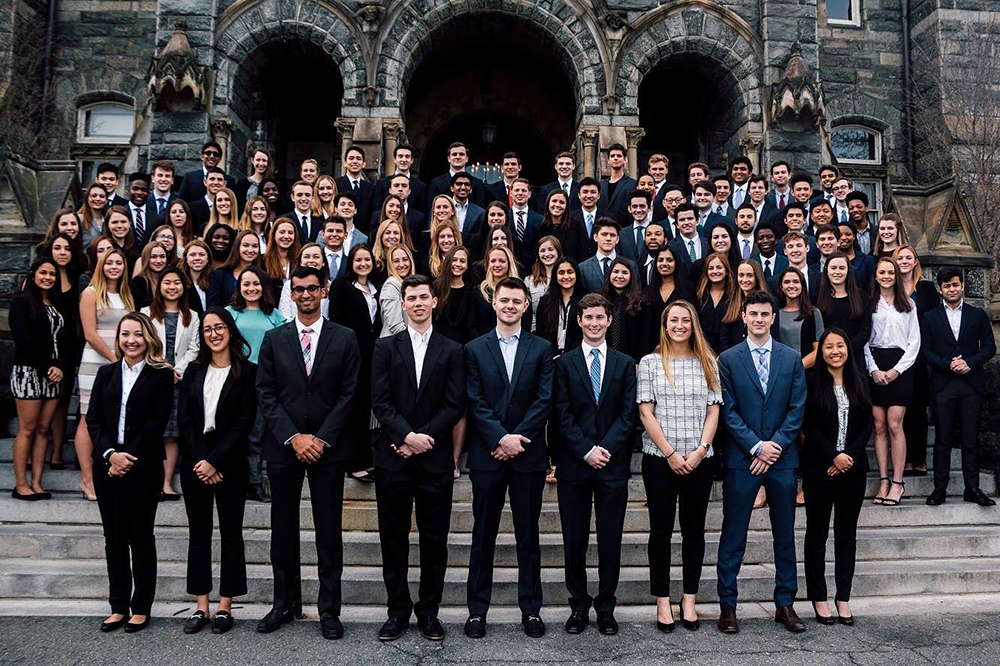 Kuran Malhotra (MSB ’20), amid allegations that he fostered a toxic work environment and engaged in instances of inappropriate touching in social settings, was placed on an indefinite leave of absence from top leadership positions in two prominent student finance groups last week.

Malhotra was suspended from his position as CEO of the Georgetown University Alumni and Student Federal Credit Union on Oct. 3, according to a same-day email to GUASFCU interns obtained by The Hoya. Malhotra was also placed on leave from his position as chief financial officer of the Hilltop Microfinance Initiative on Oct. 4, according to a message sent to HMFI staff obtained by The Hoya.

Three former HMFI staffers and a current high-ranking GUASFCU leader, who all requested anonymity, described Malhotra’s domineering leadership style and outsized detrimental influence on the organizations’ cultures. Sources described a pattern of inappropriate touching and groping in social situations — characterized by a physical encroachment into personal space that surpassed friendly contact — coupled with inadequate redress of the behavior when concerns were raised to other group leaders.

Malhotra has not responded to requests for comment on specific allegations at the time of publication.

The Hoya does not have evidence of a Title IX complaint regarding Malhotra’s behavior.

Malhotra has received two reprimands from GUASFCU leadership regarding inappropriate touching, according to the GUASFCU leader, the first during his freshman year and the second during his junior spring, just before he was confirmed as CEO of GUASFCU.

The previous year’s GUASFCU board is responsible for the selection of the new board every year. The 2018-19 board of directors, on which Malhotra served as chief technology officer, was made aware of allegations against Malhotra but still selected him as CEO, the GUASFCU leader said in an interview with The Hoya.

“The old board votes on who the new CEO is, and he had enablers on that board who looked past those incidents,” the GUASFCU leader said.

Another student familiar with the situation confirmed to The Hoya that accusations about Malhotra’s behavior, including inappropriate touching, began during Malhotra’s freshman year at the university.

GUASFCU is conducting an internal investigation into the allegations against Malhotra, according to an email to The Hoya from GUASFCU leadership.

“GUASFCU has been informed of allegations against a member of the Hilltop Microfinance Initiative who was also the GUASFCU Chief Executive Officer,” according to an Oct. 6 statement from the GUASFCU board of directors. “Given our concern for the interest and welfare of our interns and members, we have made changes to our board of directors and have begun an investigation related to GUASFCU.”

HMFI is also conducting its own investigation into the allegations, according to HMFI leadership.

“The Hilltop Microfinance Initiative was made aware of allegations regarding the professional conduct of our Chief Financial Officer, Kuran Malhotra, late last week,” HMFI wrote in an Oct. 9 statement to The Hoya. “As an organization entirely led by and comprised of Georgetown undergraduates, we take these allegations extremely seriously. The safety and comfort of our members remains our priority while reviewing the allegations brought forward.”

Neither GUASFCU nor HMFI leadership responded to requests for comment on specific allegations against Malhotra.

All GUASFCU staff members are required to sign the organization’s Professionalism and Sexual Assault Policy agreeing to comply with the organization’s standards for conduct, according to a copy of the policy obtained by The Hoya. The policy applies to all actions between interns — the title given to all GUASFCU staff members — and non-GUASFCU members of the Georgetown community, as well as interactions between GUASFCU interns and members of the credit union both within the GUASFCU workplace and outside it. Staffers are required to sign the policy every 12 months, according to a student close to the situation.

HMFI members are not currently required to sign a policy regarding sexual misconduct, according to a former staffer.

Before he held a position of leadership, Malhotra was approached informally by members of HMFI leadership on more than one occasion with concerns about his excessive drinking and inappropriate behavior that made staffers feel uncomfortable, according to another former HMFI staffer.

A separate former HMFI staffer detailed an experience at a party, when both had been drinking, at which Malhotra made the staffer uncomfortable with touchiness in their interactions.

“I remember feeling like this is weird, like this should not be happening,” the former staffer said.

After informally raising the interaction to a member of HMFI leadership, the former staffer felt blamed for the encounter and underscored the power dynamics at play in this incident and other similar ones.

The staffer later resigned from HMFI, motivated in part by Malhotra’s behavior and by a desire to gain distance from a culture that fostered manipulation and discomfort for its members.

Malhotra first became CFO of HMFI for a yearlong term in spring 2018 and was reappointed in spring 2019; he was chosen as CEO of GUASFCU in spring 2019. In over a year and a half with HMFI, he became a driving force of a culture of distrust and manipulation, according to the three former HMFI staffers.

One of the former HMFI staffers told The Hoya that the club’s workplace environment was the most toxic they had ever witnessed because of Malhotra’s leadership. Malhotra micromanaged staffers outside of his responsibilities, seeking opportunities to increase his personal power regardless of the impact of this pursuit on other members of the organization, according to the staffer. Malhotra monopolized discussions and belittled and insulted the work of other staffers, the staffer said.

“Kuran is someone who likes power, and monopolizes it and abuses it,” the former staffer said, citing Malhotra as a primary reason why they resigned from the organization.

The two other former HMFI staffers also cited Malhotra as a key factor in their departures from the organization. Malhotra is known to make staffers uncomfortable, both through verbal manipulation and rudeness in professional settings and inappropriate touching in social settings like HMFI parties. This behavior caused the departure of several staff members, according to the two former HMFI staffers.

“It just makes me feel like there’s this power dynamic going on that’s palpable. People know; we don’t say anything,” one of the former staffers said. “That’s part of the reason why I quit.”

Within GUASFCU, Malhotra created a culture of fear by using bullying tactics, like privately berating those who confronted or displeased him, according to the GUASFCU leader. Malhotra would occasionally arrange one-on-one meetings with staffers outside of the office, during which he would criticize them at length.

“He’s just attacking, and he will invoke whether you’re even capable of doing the job or whether you have the intellectual rigor to work in this thing,” the GUASFCU leader said. “He’s a bully, and that’s part of the reason that it was so hard to get him out.”

In addition to concerns about inappropriate touching, several HMFI staffers resigned because of Malhotra’s rude or manipulative behavior toward them or their awareness that Malhotra had acted inappropriately with others and leadership declined to take action, two HMFI staffers said.

One former HMFI staffer recalled formally expressing concerns about Malhotra’s behavior to leadership but felt the feedback was not followed up on.

“I know that that’s not the first time that someone has complained about him to leadership, and they kind of said, ‘Ok, we’ll handle it,’ and then not done anything,” the former HMFI staffer said.

Some of the former staff members who also quit because of Malhotra voiced their concerns to leadership but did not feel that HMFI’s response was sufficient.

“I have other people I know who’ve quit, under the condition that they’d love to stay and help HMFI as long as Kuran was gone, and they were told that would never happen,” one of the former HMFI staffers said. “They were unwilling to take action, not even to remove him, but just to broach this topic with him that he’s had a lot of complaints.”

“In Spring 2019, we had provided Kuran with written feedback and two members of the leadership team had conversations with him over the phone and in person,” HMFI leadership wrote in an Oct. 10 email to The Hoya. “Because we take honest feedback seriously, the process is both anonymous and confidential.”

Malhotra’s financial experience and expertise were enough for HMFI leadership to justify maintaining his role as CFO, according to one of the former staffers.

“I have been told that nothing will be done,” one of the former HMFI staffers said. “That Kuran is such an important asset because he has so much knowledge.”

Malhotra’s competence and dedication to his work played a similar role in the 2018-19 GUASFCU board of directors’ decision to promote him to CEO, according to the GUASFCU leader.

“He spent countless hours there; he was a huge force behind the development of the credit union in driving revenues and cutting expenses,” the GUASFCU leader said. “He did a lot for the business.”

The decision to prioritize Malhotra’s anticipated effectiveness as CEO over concerns about his inappropriate professional and social behavior partially results from the preprofessional culture of GUASFCU and from Malhotra’s intimidation of those who opposed him, according to the GUASFCU leader.

“They’re certainly not going to cause a ruckus and potentially jeopardize moving up because Kuran was known to be very vindictive in terms of allowing people to move up,” the GUASFCU leader said.

The failure of HMFI’s leadership to take action on Malhotra’s harmful behavior and broader concerns about the club’s culture created a toxic atmosphere, one former HMFI staffer said.

“I think the point is that it’s a hostile work environment, and I don’t feel safe mentally or in a physical setting with these people,” the former HMFI staffer said. “And I think that’s the point — it’s supposed to be fun. It’s a freaking club.”

This article was updated Oct. 10 to include further comment from HMFI leadership regarding feedback given to Malhotra.