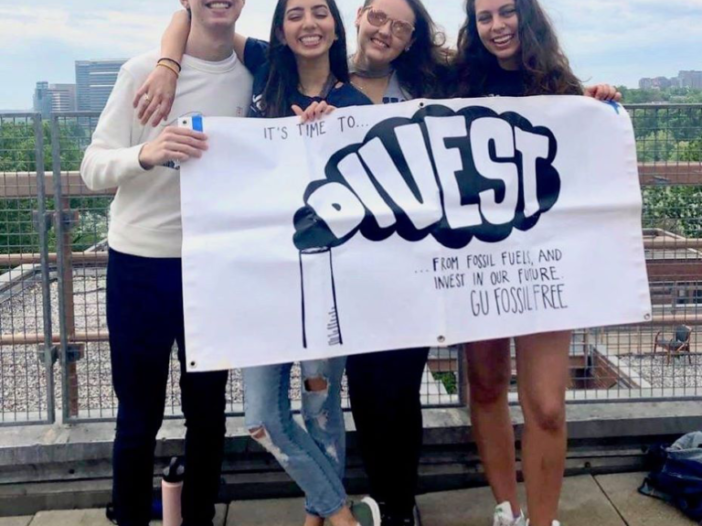 When Georgetown University announced its intention to fully divest from fossil fuels in February, Caroline James (COL ’16) received the news while enduring heat waves in Mozambique, a direct product of climate change. Nearly seven years after she helped found GU Fossil Free, the organization has accomplished its goal.

“I sat down one morning for breakfast and saw an email in my inbox that said Georgetown is divesting,” James said in an interview with The Hoya. “There are so few times in my life where I felt filled with that kind of gratification and satisfaction.”

Learning of Georgetown’s commitment to divest its endowment from fossil fuels while working in Mozambique felt especially powerful as the country has contributed little to climate change but nevertheless suffers from heat waves, according to James.

“I was sitting with people who had never in their lives had electricity and were in the heat of it, so to speak,” James said. “It feels like Georgetown, an institution that I love so much, had decided to make the right decision in the face of something so powerful and horrible was just so gratifying to me during a really difficult trip where I was with people who had contributed the least to climate change and were going to face some of the worst effects.”

Throughout seven years of campaigning since 2013, GUFF racked up small victories on the way to divestment. As the university prepares to begin this process, GUFF members past and present attribute the club’s success to a combination of factors, ranging from its nonhierarchical club structure to members’ hard work, passion and tenacity.

The burning of fossil fuels was responsible for 76% of U.S. greenhouse gas emissions in 2017, according to the U.S. Energy Information Administration. Given the negative impact such emissions have on global climate change, GUFF’s goal of pushing the university to divest from fossil fuels carries both ethical and pragmatic significance, according to James.

While Georgetown committed to divestment, its plan includes a clause allowing limited investments in funds that include fossil fuel companies. This option will be used to appropriately manage the endowment, according to Chief Investment Officer Michael Barry.

“We intend to pursue the spirit of our new policy and achieve full divestment, but preserve the option to occasionally allow some limited exposures in order to maintain prudent management of the endowment,” Barry wrote.

With its decision to fully divest, Georgetown joins 37 other U.S. higher education institutions that have also decided to divest fully from fossil fuels, including Syracuse University, the University of California system and Brown University, which announced plans for full divestment in March 2015, September 2019 and March 2020, respectively.

The divestment process is often not as simple as it sounds, according to former GUFF member Juliette Leader (SFS ’19). (Full disclosure: Leader previously served on the editorial board of The Hoya.)

“Divestment can be a rather complex kind of process. So in theory it sounds simple — just take your money out of bad things — but when you actually get into the mechanics of how it works, it gets really complicated,” Leader said in an interview with The Hoya.

Members of GUFF founded the organization after attending a speaking tour of Bill McKibben, founder of the international environmental organization 350.org. Starting in fall 2012, McKibben traveled across the United States to discuss how much carbon would need to stay in the ground to avoid the irreversible damage of surpassing two degrees Celsius in global warming.

GUFF’s founding was relatively informal, James said. A group of students who were interested in climate change and climate justice held meetings to figure out what a campaign would look like.

“We were always a campaign that was kind of on the fringes of the official Georgetown group,” James said. “It was getting the right people in the room.”

GUFF began its campaign with a poster in Red Square calling for divestment, leading to a petition that gained hundreds of signatures in favor of divestment, according to James. Despite the momentum, however, GUFF initially struggled in communicating with the university, according to Leader.

“Before I was around, the huge challenge was getting the administration to listen and pay attention,” Leader said. “Things that are a priority for us should also be a priority for them.”

In January 2013, the group presented its first divestment plan to University President John J. DeGioia (CAS ’79, GRD ’95). GUFF presented an updated proposal to the university’s Committee on Investments and Social Responsibility in October 2014, but the committee rejected it. Eight months later, Georgetown announced its divestment from coal mining companies without committing to full fossil fuel divestment.

Initial conversations with administration regarding divestment were productive overall, but GUFF faced challenges in negotiating its role in the process, according to James.

From 2016 to 2017, GUFF worked with the university to establish the Socially Responsible Investing Policy, according to Willard, which aligns the university’s investment strategy with its commitment to social justice, protecting the planet and the common good. The policy was implemented in June 2017.

The group continued to push for greater university commitment to divestment, successfully convincing the university to divest from tar sands in 2018. Finally, in February 2020, GUFF achieved its ultimate goal: full university divestment from fossil fuels.

Despite the initial challenges, several aspects of the original campaign were instrumental in the campaign’s ultimate success. The group’s nonhierarchical structure has allowed everyone to contribute, according to James.

“Because we were focusing so much on climate justice, we wanted to ensure that we were encouraging all voices and participation,” James said. “If you showed up, you had a voice.”

Georgetown’s Jesuit values also became an important part of GUFF’s message urging the university to divest from fossil fuels. GUFF’s most recent proposal, which culminated in the decision of full divestment, was submitted to CISR on Jan. 17, 2019, and begins with the words of Pope Francis: “We received this world as an inheritance from past generations, but also as a loan from future generations, to whom we will have to return it!”

Invoking Jesuit values throughout the campaign was a natural way to ensure that the university’s actions were consistent with its beliefs, according to GUFF co-founder Patricia Cipollitti (SFS ’15).

GUFF’s incremental progress in the years since its founding proved vital in the campaign’s success. By convincing the university to divest from coal and tar sands and to establish an SRI policy, GUFF gradually built a system of precedence that led to full divestment, according to Samantha Panchèvre (SFS ’19).

The SRI policy was especially significant because supporting any fossil fuels would contradict the SRI policy, which GUFF quoted in its final proposal, Panchèvre said.

The biggest reason behind GUFF’s success, however, was the members themselves who contributed their passion and resourcefulness to the campaign, according to James.

“I have been really blown away by the professionalism and the competency of so many members of GUFF that I’ve known over the years. They are one hour able to go from leading a protest in Red Square to the next hour going, suit-clad, into a meeting with CISR or the board and able to present really clearly what our arguments were,” James said. “We really ran on bare-bones, grassroots resourcing. We were doing everything ourselves and we got really creative.”

GUFF’s persistence was also vital in achieving full divestment, according to Cipollitti.

“I attribute it to the tenacity of the students, who have been able to not take no for an answer and take the demands back to the drawing board but not modify them in a way that cuts back on their strength but actually builds on them,” Cipollitti said. “So when the university announced that it would divest from coal, we went back to the table and said that’s not enough.”

“It is important for them to release periodic reports about how that’s going. I think it is imperative for the university, particularly students, to stay vigilant and hold the university responsible to its commitment,” Cipollitti said.

“Prior to our announcement we had already taken steps to divest from some fossil fuel companies and had stopped making new investments. We are currently working to transition our passive index funds into index funds that exclude fossil fuel producers,” Barry wrote in an email to The Hoya.

In the end, GUFF wants to become obsolete. GUFF’s campaign is likely to come to an end once GUFF determines that it has fulfilled its purpose on campus, according to current GUFF member Celia Buckman (SFS ’21).

“Ultimately, we’re a campaign,” Buckman said. “We work ourselves out of a job. I think the vast majority of our work has been accomplished, which is amazing.”