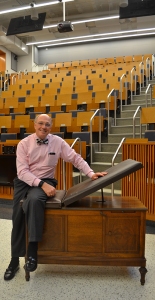 The School of Medicine will share the space with the hospital’s training program, and a set schedule for class use is not yet cemented.
Dean for Medical Education Dr. Stephen Mitchell said the emphasis on increasing the school’s clinical education is a concept the GUMC focused on with its $10 million renovation.

“The more teaching that’s done in a clinical context, the better,” Mitchell said. “Even if you’re learning basic science, you need to learn it as it applies to a patient.”

Around 600 individual donors contributed $8.5 million for renovations through various medical school initiatives. MedStar Health donated the remaining $1.5 million needed to finalize funding and in return will have access to the space for its own residents and interns.

Mitchell highlighted the alumni donors as the driving force behind the project’s completion.

“Over one alumni weekend, we had pledges for chairs, so we offered the 100 best seats in the house to honor the 100 best teachers,” Mitchell said. “We raised over $400,000 that weekend.”

The amphitheater’s namesake, Dr. W. Proctor Harvey,  GUMC for more than 30  years, starting in the 1950s. He pioneered cardiac auscultation – the practice of listening to a patient’s heart and diagnosing him based on any abnormalities in his heartbeat. Harvey would often open classes by playing a piece of classical music and asking students to pay attention to certain instruments to model the idea of auscultation.

Mitchell said Harvey was known for listening to patients’ literal hearts only after listening to their metaphorical hearts — their concerns and long-term needs — and that this unique approach is reflected in the amphitheater itself.

“I visit a lot of medical schools, and I would say right now that there is not another clinical teaching space like this in the country, if not the world,” Mitchell said.

The renovations included extensive technology additions to the amphitheater, including several 100-inch projector screens, multiple high-definition cameras and individual audio connection, broadband access and power outlets for each of the 300 seats.

Additionally, changes include a new concrete floor and ceiling panels designed for improved acoustics. The space includes 15-inch desks and an electric “sky wall,” which can be brought down to divide the space into two classrooms.

“We actually have a digital stethoscope, so that you can have a live human being sitting on an exam table in the middle of the classroom. It broadcasts that person’s heart sounds to every headphone in the amphitheater,” Brown said. “So you can have 300 people sitting there listening to what a physician would be hearing in a stethoscope.”

Sarah Schuessler (MED ’19) said the amphitheater is popular among students, although it is not yet clear how often students will get to use it, given MedStar’s share of the space.

“It’s a beautiful space. I’m really excited about it, and I’m really happy that we have it,” Schuessler said. “I think there’s a little bit of a consensus among the medical students that we are happy to have it, but we are disappointed that we’re not getting to use it more.”