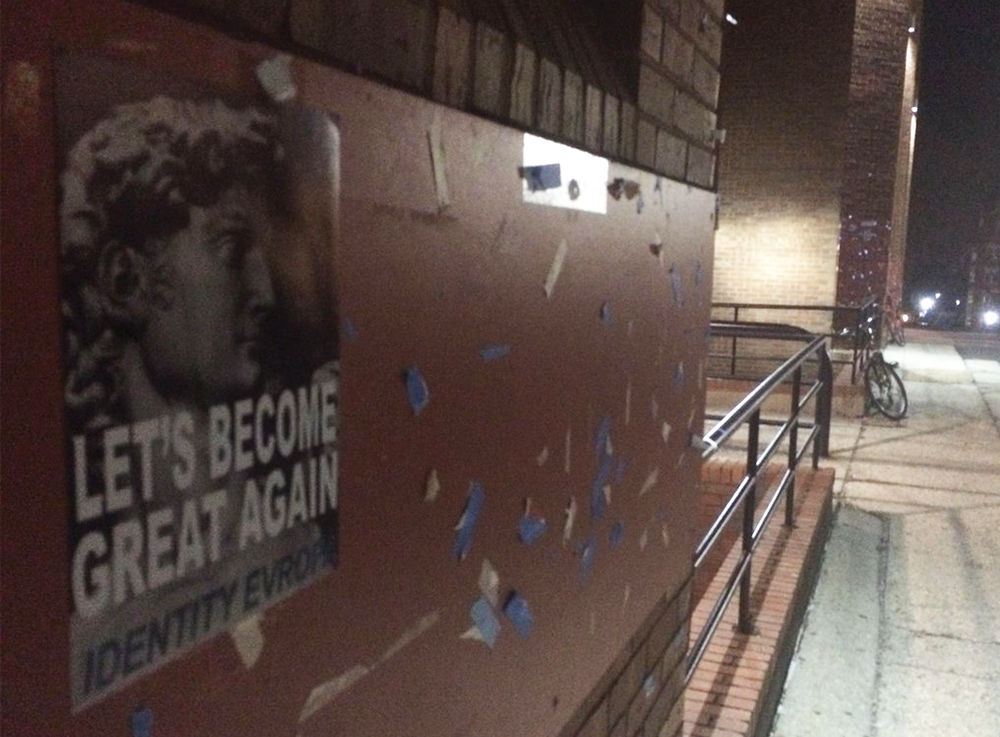 The Georgetown University Police Department has launched an investigation after posters were placed in several locations on and off campus by Identity Evropa, a white national group, Sunday night.

The posters, placed in locations including Red Square and Village A, included several white nationalist slogans, such as “Our destiny is ours,” “Serve your people,” and “Let’s become great again.” The group took credit for the posters on its Twitter account.

By Monday night, many of the posters had been taken down by students. GUPD Chief Jay Gruber said campus police were investigating the matter.

“We have recently been made aware of the posters,” Gruber wrote in an email to The Hoya. “We are currently investigating this.”

The Southern Poverty Law Center identified the group as white nationalist on their website in February.

Vice President for Student Affairs Todd Olson said in a statement to The Hoya the campaign is an act of hate.

“The posters appear to be part of a campaign by an outside group that has posted similar materials on campuses across the country. Acts of hate will not be tolerated on Georgetown’s campus,” the statement reads. “We are a community that welcomes all people and that values understanding, dignity, inclusion and respect.”

“We are appalled to see that these flyers that promote hate were spread across campus. Because of the hateful message that the organization embodies, this crosses the line of free speech into dangerous territory of harassment,” Mack and Andino wrote in an email to The Hoya. “We are committed to promoting a tolerant speech environment where there is fruitful dialogue.”

“At this time we want to remind students that Georgetown has a Bias Reporting System if they feel any of their identities have been targeted in a threatening manner,” Mack and Andino wrote. “We would also like to emphasize the current guidelines of the Speech and Expression Policy as laid out by the university and to express that during our administration we plan to continue programming that informs the student body of these guidelines.”

The Georgetown Bipartisan Pro-Israel Dialogue denounced the posters and Identity Evropa in a post to the group’s Facebook page Monday.

“These individuals may be blinded by hatred and ignorance; the Georgetown population, however, is not,” the post reads. “For we are Georgetown, and we are one family. And no Hitler dress-up club can touch that.”