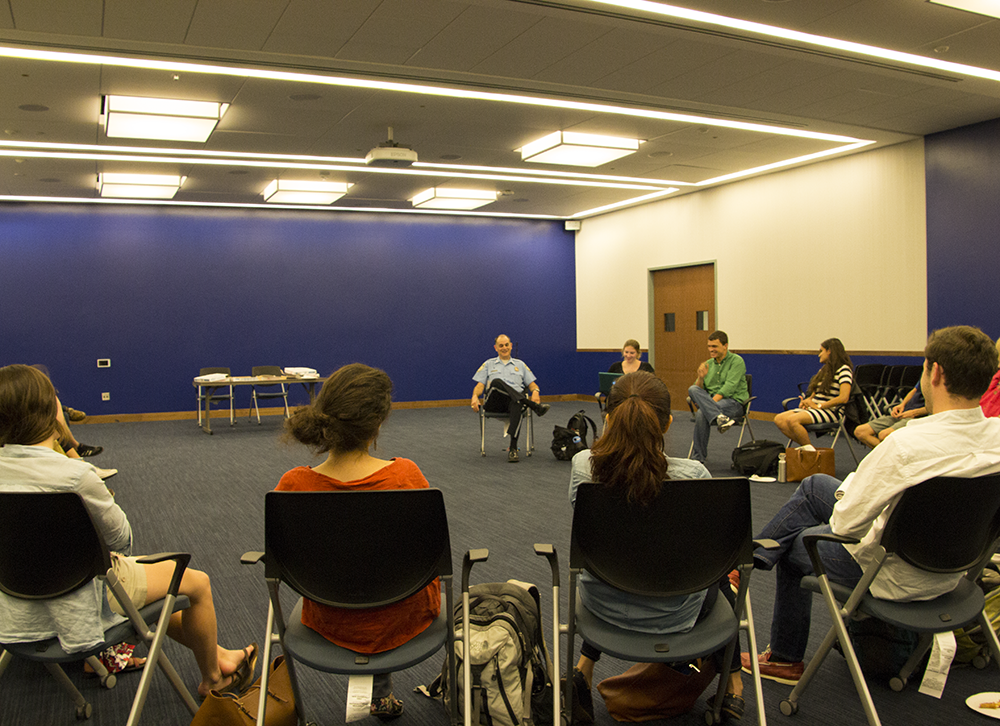 During the event, which was sponsored by the Georgetown University Student Association, students discussed safety concerns and campus policies with Gruber.

“One of the most important things for me is to get feedback from the students,” Gruber said. “I’m here to serve the students. I really enjoy engaging students and getting their input, their information and feedback.”

The roundtable attracted more than 20 students, the largest GUPD roundtable turnout to date, according to GUSA Secretary of Student Health and Safety Nora West (SFS ‘15).

Throughout the roundtable West asked Gruber questions, which were submitted online by students prior to the meeting.

Much of the discussion focused around last week’s removal of a H*yas for Choice table outside of the front gates by a GUPD officer. The group was situated on the corners of 37th and O streets in a protest of the university’s bestowal of an honorary degree upon Donald Cardinal Wuerl, due to his beliefs about LGBTQ rights and women’s health.

Gruber said that GUPD does not enforce any D.C. street laws and that GUPD was acting outside of its limits when it removed the H*yas for Choice table.

“The speech and expression policy didn’t even have any place outside the gates of the university,” Gruber said. “I could have three people naked carrying signs in the middle of 37th and O protesting the president. I don’t have a dog in the fight.”

In response to the incident, the Center for Student Engagement will be training the GUPD leadership staff on Oct. 8, according to Gruber. Additionally, every GUPD officer ranked sergeant and below will be trained in the university’s speech and expression policy in the coming months.

Gruber also used the roundtable as an opportunity to talk about the university’s LiveSafe app, a mobile crime app that allows students to report tips to GUPD by either streaming video or by sending a text.

According to Gruber, 900 people have signed up since the app launched at the start of New Student Orientation in August, yet Gruber noted that he had hoped that there would be 2,000 to 3,000 sign-ups by this time.

Another topic brought up at the roundtable was the SafeRides program. Gruber said that a number of improvements have been implemented in order to help bring transparency and greater accessibility to the program by releasing an update to the LiveSafe app that will allow students to request a SafeRide pickup and track the van while it is en route.

“It’s a program that I have,” Gruber said regarding SafeRides. “And any program that I have to serve students, I need it to run well. And its not running 100 percent right now, but I guarantee you it is something we’re working on.”