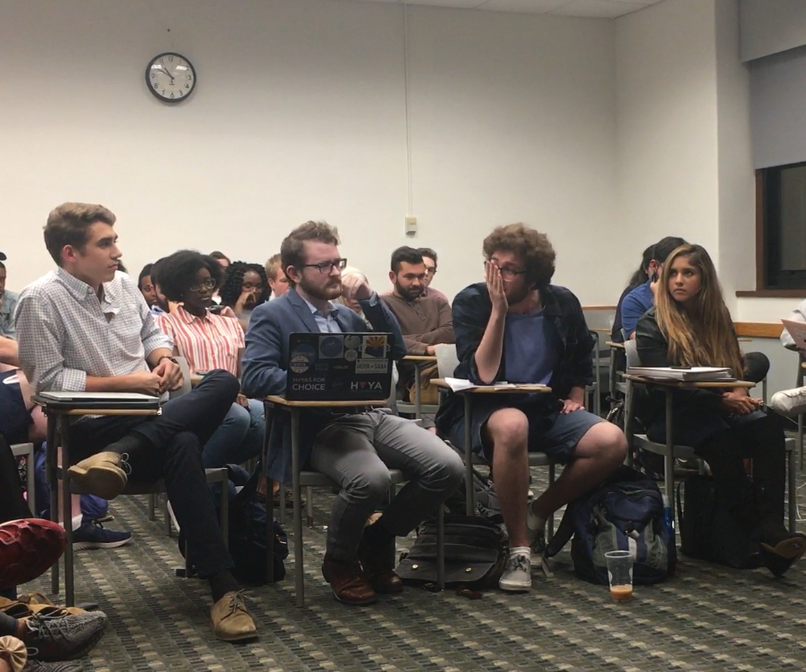 Martinez was sworn in Sunday and will serve as president for the remaining 2018-19 presidential term, culminating when the next president is sworn in, which historically has been the first week of March.

GUSA has not yet formally announced Martinez’s presidency.

Currently, the GUSA executive branch includes Martinez and policy chairs, who were appointed by Nair’s presidency and confirmed by the senate.

Martinez will appoint the next vice president, to be confirmed by a two-thirds majority in the senate. The confirmed senate elections will take place after Sept. 30, when freshman senate elections fill the currently vacant positions, according to Martinez.

At the presidential swearing-in Sunday, the GUSA senate also passed a resolution that emphasized the need to disseminate resources offering support for students after Nair’s resignation.

The senate resolution also included a letter that issued an apology to GUSA senior executives and the student body for demanding resignations at the emergency senate meeting Sept. 11.

“The actions of the GUSA Senate on Tuesday, September 11, 2018 were brash and filled with emotion. The GUSA Senate moved immediately to vilify members of GUSA, rather than focusing on supporting survivors and being cognizant of the effects of our words,” the statement reads. “To those whose resignations we demanded, we apologize for acting immediately and harshly without a more clear, thorough discussion.”

Martinez affirmed the sentiments published in the senate letter and said he is committed to helping move GUSA forward through his remaining term.

“The letter speaks about this, but just making sure that we’re not blaming people now, we’re not pointing fingers, we’re creating GUSA into a space of healing and making sure we can heal for the rest of this term and hopefully really change the culture of GUSA,” Martinez said in an interview with The Hoya.

Bennett appreciated the senate’s apology and said he was confident in the way he and other GUSA executives responded last week after Nair’s resignation.

“When it became clear to those of us in GUSA leadership that our then-president had lost the support of student communities and was the subject of student concerns, we acted promptly and in good faith – notifying appropriate parties of our concerns, including the Administration,” Bennett wrote in a statement to The Hoya. “Our intentions were always to protect the safety, privacy, and rights of those involved as well as the interests of student advocacy on campus.”

The senate resolution, which passed in a 14-to-1 vote by the senate, urged that the Women’s Center, Counseling and Psychiatric Services, Health Education Services, Project Lighthouse, the Title IX Office, the LGBTQ Resource Center and other campus resources be promoted to the student body and all community members.

Though a joint effort by senators, the resolution was introduced by Transition Vice Chair of the Senate Patrick Walsh (SFS ’21) and co-sponsored by Transition Chair Eliza Lafferty (COL ’21), as well as GUSA Senators Samuel Appel (COL ’20) and Claire Smith (COL ’19) to reflect on the emergency senate meeting last week. Walsh and Lafferty became transition vice chair and chair respectively under Martinez’s leadership.

“The motivation for it was just to clarify some things, talk about how we felt on Tuesday at our emergency senate meeting,” Walsh said. “We were in a pretty emotional state as well, it was all happening very fast, so some statements were made that seemed hasty and the biggest regret that we have is that we didn’t start anything with the providing of resources.”

Bennett expressed his support of the senate resolution in ensuring students have access to resources on campus.

“I deeply appreciate the GUSA senate’s apology for its hasty actions on September 11,” Bennett wrote in an email to The Hoya. “I understand and share the senators’ concerns for ensuring a safe campus community and reaffirm their resolution on available resources for the student body.”

Rahman echoed Bennett’s support of the senate resolution and hopes GUSA will continue to advocate for the student body to create impactful policy.

“My hope is that GUSA will continue to tirelessly serve the student body. There are voices in student government here that deserved to be heard on policy, loud and clear,” Rahman wrote in an email to The Hoya. “These are voices that want to make an impact and will make an impact. We hope that students at Georgetown will keep on utilizing GUSA as an avenue for advocacy and change on this campus.”

Over the coming weeks, Martinez will meet with GUSA leadership, policy chairs and students on campus to develop a platform that widely encompasses students’ concerns.

“I didn’t campaign for this obviously … but my goal is to make sure that policy chairs are being recognized and that their input is being heard,” Martinez said. “I cannot tell you 100 percent what students need on campus. I will be sitting down with students in the following weeks to talk about what GUSA can do to build a platform that is representative of our needs as a body.”

This article was updated June 23  to indicate the absence of Title IX or Office of Student Conduct complaints against Nair and to include comment from Nair.