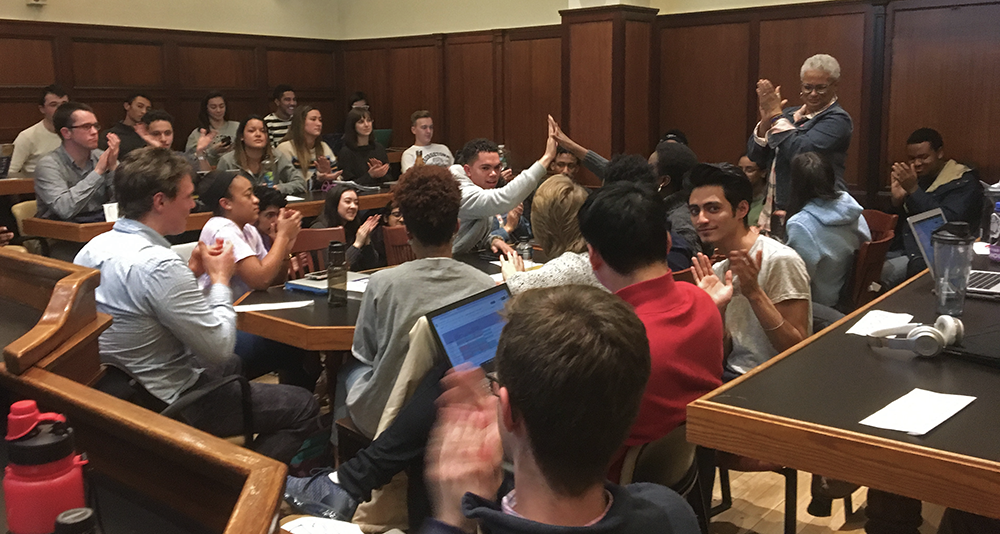 Students are set to vote on the creation of a semesterly fee that would go toward a fund to benefit descendants of the GU272 this April after the Georgetown University Student Association senate approved the proposed referendum Sunday evening.

The $27.20 reconciliation fee would be added to students’ tuition to financially contribute to the descendant community of the 272 enslaved individuals sold to pay off Georgetown’s debt in 1838. The referendum is set to coincide with GUSA’s senate election in April, the date of which has not been set.

If the referendum passes in April, the “Act of Referendum to Establish a New GU272 Legacy” would create the Reconciliation board of trustees, a group of students and descendants tasked with allocating funds towards initiatives to benefit descendant communities.

If the resolution passes, the Reconciliation fund could collect $405,987 from its 7,463 undergraduate students. The financial aid office indicated students receiving financial aid from the university would not have to pay the fee, according to former GUSA Senator Sam Appel (COL ’20), who originally sponsored the resolution proposing the referendum; the board of directors has not made its stance on the referendum clear. The sale of the GU272 in 1838 raised $3.3 million, when adjusted for inflation.

With a 20-4 vote, the proposed referendum received the necessary support from two-thirds of the 29 GUSA senators. Five senators were not present. The vote follows an endorsement of the referendum from GUSA President Juan Martinez (SFS ’20) and Vice President Kenna Chick (SFS ’20).

The push to hold this referendum began with the GU272 Advocacy Team, a group of students who advocate for descendants on campus, who began looking into the possibility of allowing students to vote on the reconciliation fee early last semester.

Following the bill’s passage, the GU272 Advocacy Team plans to initiate education campaigns prior to the referendum to inform the student body on descendant communities and their relationship to the university, according to Advocacy Team member and descendant Mélisande Short-Colomb (COL ’21).

These plans include forums to facilitate dialogue such as town halls, though specific details like dates have not yet been set, Short-Colomb said.

Prior to debate, The senate approved an amendment Dylan Hughes (COL ’19) introduced. Hughes proposed the amendment to clarify language referring to the GU272 Reconciliation board and add financial and accounting guidelines such as prohibitions on using the fund for political purposes.

The GUSA senate does not represent the diversity of voices on campus, which is why the reconciliation fee ought to be presented for the consideration of the student body, Advocacy Team members and senators supportive of the referendum said

“We as the GU272 student Advocacy Team believe the entire undergraduate community should have the opportunity to have this conversation together, as we in this room can’t and shouldn’t speak for the student body,” Aly Pachter (COL ’19) said at the meeting. (Full Disclosure: Pachter formerly served on The Hoya’s Board of Directors.)

Four senators opposed the referendum. Senators Sam Dubke (SFS ’21) and Evan Farrara (COL ’19) objected to placing the responsibility on students to atone for the university’s sale of the GU272.

“It’s manifestly Georgetown University’s obligation to make financial commitments regarding its legacy with slavery, not student’s,” Farrara said at the senate meeting. “Additionally, student money should only be used towards student’s purposes, even if non-student purposes are meaningful, as in today’s referendum.”

The university should seek to institute more of the recommendations made by the Working Group on Slavery, Memory and Reconciliation; however, students should not bear this burden, Dubke wrote in an email to The Hoya.

“As the Working Group on Slavery, Memory, and Reconciliation made clear in 2015 – these are obligations of the university and not of its students,” Dubke wrote. “I would ardently support any lobbying of our administration to live up to its own promises and recommendations, but I do not feel comfortable making the same demands of individual students.”

Georgetown University President John J. DeGioia formed the Working Group on Slavery, Memory and Reconciliation, a group of faculty and Georgetown Alumni, to address the university’s legacy of slavery in September 2015. Though Georgetown has offered preferential consideration to descendants of the GU272 among other recommendations it has met, multiple recognitions still remain unaddressed, including financial aid for descendants.

Following the vote, supporters of the bill celebrated the bill’s passage. The GU272 Advocacy Team is prepared for the next steps after the vote, Hannah Michael (SFS ’21) said.

“I look forward to working with senators and other students as we dig deeper into relearning our understanding of Georgetown’s history regarding slavery and move forward with educating and empowering descendant communities,” Michael said in an interview with The Hoya.

Although she objected to the referendum, Lexie Gutierrez (COL ’20) was glad that Sunday’s meeting gave students a chance to speak their mind.