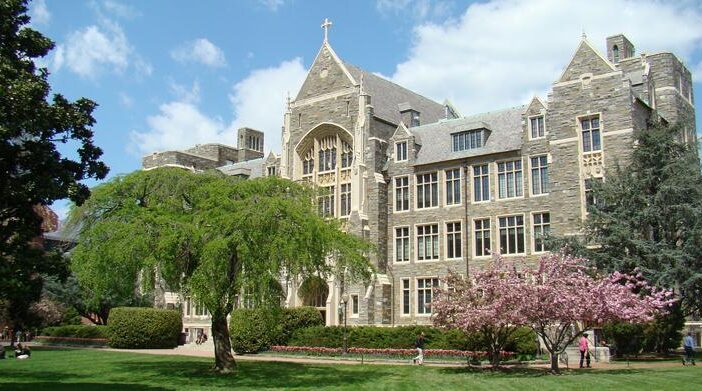 Georgetown University Student Association (GUSA) senate and executive candidates spoke to students about their plans for future legislation and answered questions from voters during a Nov. 4 town hall event.

At the town hall, the three executive tickets — Camber Vincent (SFS ’24) and Alyssa Hirai (SFS ’24), Chijioke Achebe (SFS ’25) and Devon Pasieka (MSB ’25) and Spencer Woodall (MSB, SFS ’24) and Anya Caraiani (SFS ’24) — participated in the first of the three one-hour long discussions. Candidates responded to individual questions, and other candidates were allowed to respond if mentioned by name. The second session featured 10 first-year candidates who are vying for seven class of 2026 senate positions, while the four at-large senate candidates who are running uncontested spoke in the third session. The town hall took place in White-Gravenor Hall.

Moderators and students asked candidates about what strategies they will use to improve GUSA’s reputation, diversify student representation within the organization, improve the efficacy of GUSA’s communication with the student body and promote free speech on campus.

Vincent, who currently serves as speaker of the GUSA Senate, said it is important that GUSA consider student voices when drafting resolutions.

“You don’t earn students’ trust by saying ‘you should give me your trust,’ you earn students’ trust by proving that you have earned it,” Vincent said at the event. “You do it by meeting with administrators, creating results and actually publicizing those results to make sure that students know that these resources are here for them and that their voices are being heard.”

Pasieka said her and Achebe’s ticket has built their platform around reaffirming GUSA’s purpose to focus on improving students’ lives.

“Our platform is really centered around getting back to the core of what GUSA should be,” Pasieka said. “It should be about the students and making sure that every student at Georgetown should be able to have the most impact possible over however many years they have here.”

Caraiani is the only candidate who does not currently hold a position in GUSA, which Woodall said is an advantage for their ticket.

“I would like to point out that I’m the only ticket running with someone who’s a complete outsider to GUSA, so I bring new blood to the table, and I want to work with new senators and new people to make sure they can do whatever they can to implement their new ideas and bring new ideas to the table,” Woodall said at the event.

Class of 2026 senate candidate Andrew Wong (SFS ’26), said underfunding of GUSA is a critical problem within GUSA that limits the body’s ability to create positive change on campus.

“Many of my candidates here will say ‘GUSA has lost trust,’ and ‘it’s an ineffective institution,’” Wong said. “I agree with that to a point, but I think the main issue here lies with the fact that GUSA is under-resourced and simply can’t fulfill all students’ expectations.”

Class of 2026 senate candidate Seth Edwards (COL ’26) said it is important to take into account the impact on Georgetown employees, not just on students, when working with the university to enact changes like extending dining hall hours.

“I think that what we often ignore running for GUSA is that some of our policies are going to have effects on workers,” Edwards said. “If we are extending Leo’s hours, that means that there’s gonna be another hour of a shift added to workers’ here. Listening to what they were saying, they are already treated poorly by the university, and they don’t need students to be pressuring them into a higher workload.”

“I’m not going to lie, most of the time when I think of GUSA I think of wannabe politicians,” Barnes wrote. “However, there were quite a few people like Ryan, Dylan, Hilary, and Seth who changed my mind. I felt like they genuinely wanted to make a difference.”

“I feel like GUSA has not done enough to put pressure on the university for raising tuition, so that we can try to get the alumni to understand that we want them to withhold dowries or donations or any sort of funds from the university so that they go directly to clubs,” Arzano said at the event.