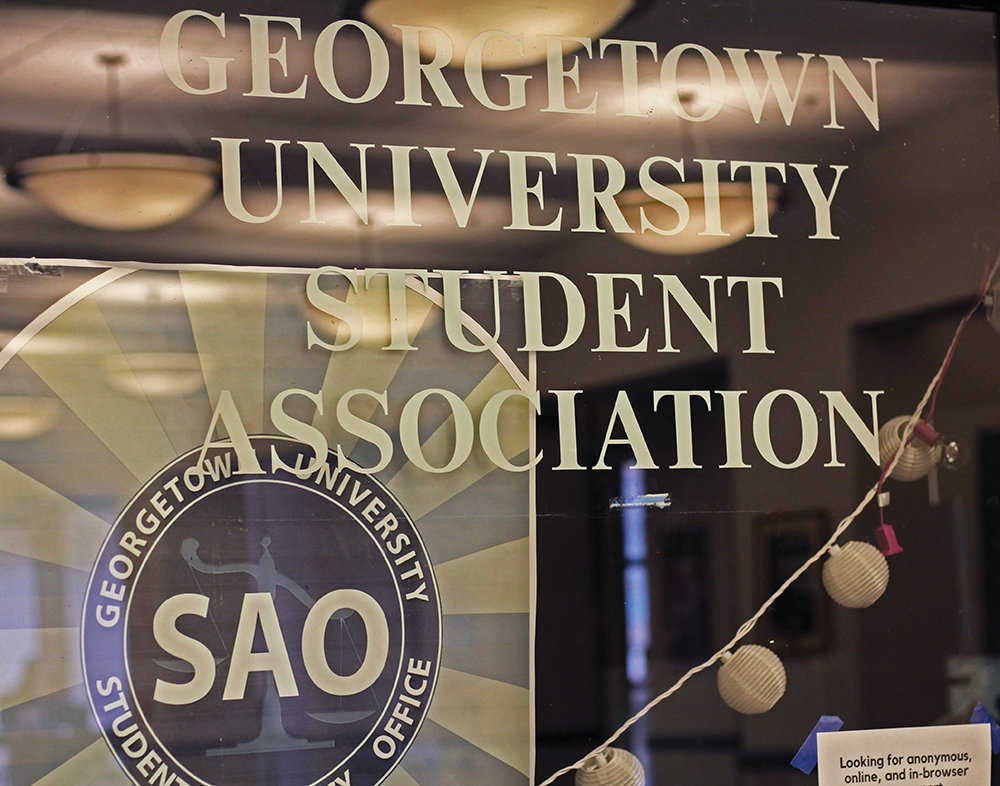 A special election will not be held for the vacant seat of Sam Appel (COL ’20) in the Georgetown University Student Association senate, in a departure from the GUSA constitution.

The GUSA president must call and hold an election for a vacant senate seat within 30 days of a senator’s exit, according to the GUSA constitution. The elected successor would occupy the seat for the rest of that legislative term. For GUSA’s constitution to be upheld, an election to fill Appel’s seat must take place by Feb. 28 following his Jan. 28 resignation.

No special election is planned for Appel’s seat because of tight timing, according to GUSA election commission chair Minji Doh (SFS ’19). The elected senator would only serve a one- to two-week term before the general GUSA senate election, which is slated for mid-April, Doh said.

“Because the election procedure itself takes 3-4 weeks to complete, and with the spring break, even if we start the process next week, the earliest the elected-senator would be in the office would be third week of March,” Doh wrote in an email to The Hoya. “Because of the new election rules, it makes sense that we do not hold a special election at this time.”

GUSA reformed the senate elections in a February 2018 referendum after two failed referendums on the same issue took place two years prior. Under the new regulations, senators are elected based on class year rather than geographic location and elections for non-freshman senators will be held in April rather than in the fall.

“Although the Constitution gives the GUSA President the power to determine Election Commissioners and special elections, over time those responsibilities have more directly fallen under the purview of the Election Commission,” Martinez wrote in an email to The Hoya. “This has occurred under previous Executive administrations and Senate sessions.”

GUSA senate Speaker Eliza Lafferty (COL ’21), informed both the GUSA executive and election commission of Appel’s resignation at the time and deferred to the commission’s judgement on the matter.

“Generally, some combination of the election commission/president decides what is pragmatically the best option,” Morris wrote in an email to The Hoya. “In theory, calling an election has the potential to raise just as many questions as not calling one. Their decision holds unless some party appeals to the Constitutional Council.”

GUSA senators differed on expectations around the vacant seat but confirmed they were not informed about the decision not to hold a special election.

GUSA Senator Harrison Nugent (SFS ’20) said he assumed the special election would not occur because of the close timeline with upcoming senate elections.

“I think most of us assumed the seat would be filled during the usual Spring Senate election due to it being so close,” Nugent wrote in an email to The Hoya.

Conversely, because GUSA constitution specifies a special election in the case of a vacancy, GUSA Senator Winston Ardoin (SFS ’21) assumed that one would be called for Appel’s seat.

Appel resigned from both the senate and the executive race Jan. 28 for reasons that have remained private at the request of a third party.

Typically, a special election for a vacant senate seat would be put on the same ballot as the executive election, according to Doh.

However, the timeline of the resignation, which happened in the middle of the executive election season, meant the special election could not be held during the executive campaigns, according to Martinez.

In addition to Appel’s departure from the senate, GUSA has experienced several resignations in recent months. Former GUSA Vice President Naba Rahman (SFS ’19) and 10 other executive cabinet members resigned Sept. 11 as part of a push to force then-GUSA President Sahil Nair (SFS ’19) out of office. Nair resigned later that morning.

After Rahman and staff members tried to rescind their resignations, GUSA senators demanded the resignations go into effect following an emergency session of the senate that night. Rahman and the remaining cabinet members officially resigned Sept. 13. Former Senator Chad Gasman (COL ’20) also resigned after the executive resignations because of subsequent mental health duress, according to a Sept. 12 statement by Gasman.

Special elections are not atypical and have regularly taken place for senate seats, according to GUSA historian Henry Westerman (SFS ’21).

“There have been special elections almost every year for the past 10 years or so, implying that these events are quite common,” Westerman wrote in an email to The Hoya.