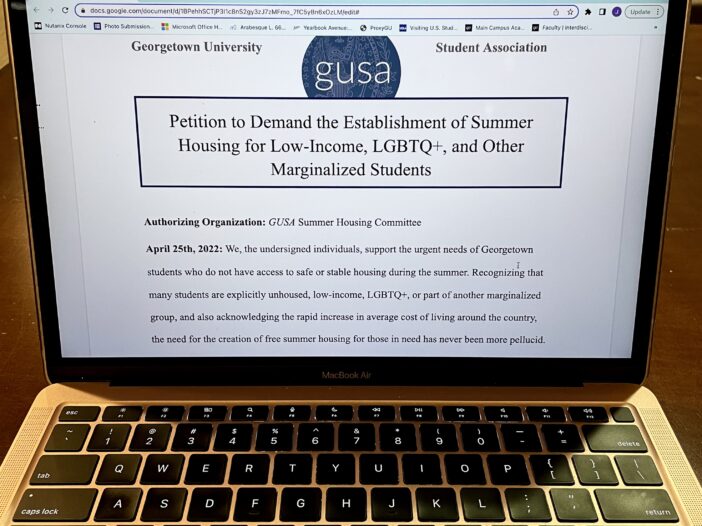 The petition, which was released by the GUSA Summer Housing Committee on April 25 demands the university immediately establish summer housing for students in need, provide adequate food and utilities for students who are given housing and create a permanent summer stability housing system. As of April 28, 308 students, five faculty members and 17 student organizations have signed on to the petition.

Georgetown has a duty to ensure all of its students have access to housing for the summer, according to the petition.

“As students at Georgetown, an institution which hosts one of the wealthiest student bodies in the world, it is incumbent upon us to ensure that no Hoya need worry about access to safe and stable housing during the summer,” the petition reads.

The Georgetown Scholars Program currently provides a sponsorship for summer housing, but GUSA Socioeconomic Advocacy Chair Axel Abrica (COL ’25) said the program does not have enough spots to accommodate all the students who require housing. Other organizations on campus like Residential Living and the Center for Social Justice offer housing for student workers, but Abrica said the committee wanted housing insecure students to not be forced to apply for a job.

Ace Frazier (MSB ’24), a member of the committee, said they have been provided free summer housing in the past through their job as a Residential Living manager.

“They gave me my own living space with an apartment, so I didn’t have to really pay for anything — I was lucky in that aspect,” Frazier said.

“You never know what’s going to happen because anyone can become homeless or not have parents the next day — that’s my personal situation, and anyone can end up in a situation of abuse,” Frazier told The Hoya. “Having summer housing is more than just for the people who need it right now. It could also be for you, so I think that this is an issue that reaches every student.”

“Drafting a petition was not our first option, but our committee collectively agreed that it was the best option given the lack of progress in securing summer housing,” Anderson wrote to The Hoya. “We also hope it helps to bring us to the table with University leaders in the coming days.”

GUSA has pushed the university to provide summer stability housing in years past, especially after the university raised summer housing costs from $1,500 to $4,485 in 2021.

Abrica said a permanent summer stability housing plan will help ease many students’ anxiety about where they will live for the summer each year.

“Every single year, we have to keep doing the same thing and advocate for free summer housing,” Abrica said in an interview with The Hoya. “What is different about our initiative is that we want to make this permanent, so that future generations of GUSA students and advocacy groups on campus don’t have to go through this again.”

A university spokesperson said the university is working with GUSA and housing insecure students to find a solution.

“We are in the process of discussing this issue with students who have expressed an interest, including GUSA representatives,” the spokesperson wrote. “Leaders in the offices of Residential Living, Student Affairs and Student Financial Services work with students who won’t be enrolled in classes this summer and who face housing insecurity and other challenges, to determine how to assist them.”

Abrica said the group hopes to create a streamlined application process that students can use to request summer housing.

Earlier this semester, the GUSA senate passed a resolution written by GUSA Senator Otice Carder (COL ’23) and co-sponsored by Abrica demanding many of the same things as the petition, including a permanent summer housing system. Abrica said GUSA decided to move forward with the resolution and petition after over 100 students expressed their need for summer housing in a survey released by the GUSA Inclusion and Equity team in early March.

While GUSA resolutions like these express important student perspectives, the university is not required to act on them, according to the spokesperson.

“The continued safety and security of our students is a top priority for the University,” the spokesperson wrote. “We appreciate GUSA’s advocacy in that area.”

Anderson said all students should sign the petition as every signature matters.

“For every person that signs the petition, our movement toward establishing housing becomes more credible, more robust,” Anderson wrote. “When you sign the petition, you’re not just offering your support for marginalized communities, but telling the University that you see the problem, and you expect it to be fixed.”

This article was updated on April 30 to correct the name of the author of the resolution.