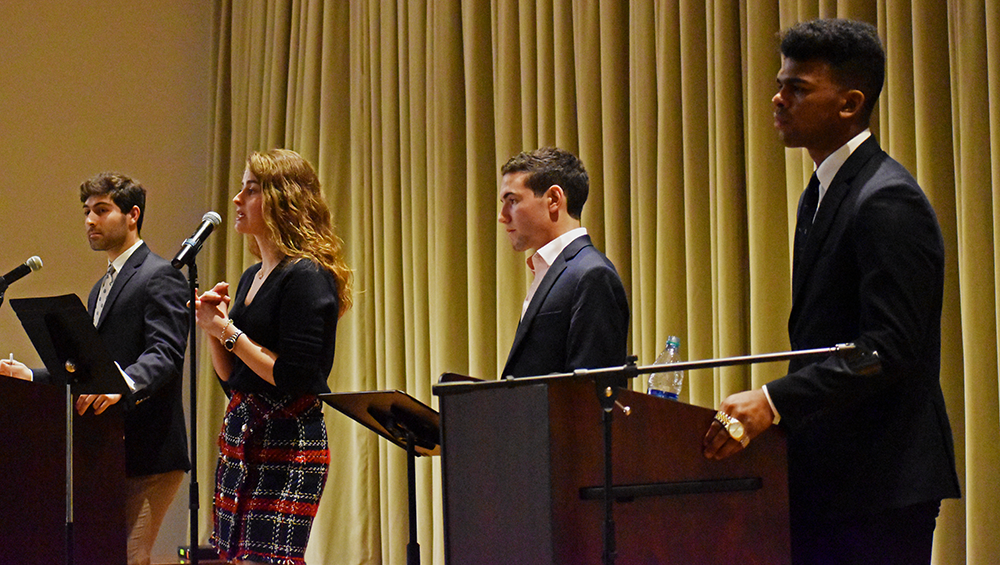 In his opening statement, Nemazi discredited his opponents for their lack of previous GUSA experience and policy proposals that he said were unrealistic.

“We’re just offering very tangible goals that will make GUSA relevant and actually impact the lives of students,” Nemazi said. “We all want to lower tuition, we all want to make dining better, but actions speak louder than words.”

Zuccala responded in his opening statement that the simplicity of his campaign’s policies are a strength and a result of his GUSA outsider status.

“My answer to him, ‘Why is GUSA inefficient?’ is because GUSA has all these insiders that introduce 20-point, 30-point plans and really don’t get anything accomplished,” Zuccala said. “We just have three points, they’re pretty simple and I think we can accomplish all three of them.”

In her introduction, Gray said her campaign raises relevant student concerns that cannot be ignored.

“I initially decided to run because I saw issues that needed to be addressed on this campus,” Gray said. “I am staying in this fight because I believe those issues are too important to go unresolved.”

Francis began the debate by describing how he and his running mate Aleida Olvera (COL ’20) plan to be open and honest about their achievements and shortcomings.

“We want to make sure that we are very transparent with you,” Francis said. “We want you to know where we are failing, and where we are getting our work from, and also how we’re succeeding.”

As the debate progressed, candidates offered policy proposals they plan to push if elected. Nemazi’s campaign aims to create a Zen Den meditation room in Lauinger Library for students, while Gray intends to advocate for pro bono legal representation for students pursuing Title IX cases. Francis pushed for the creation of a women’s and gender studies department, and Zuccala’s policy focused on improved responses to facilities requests and increasing the value of student meal plans.

Gray and Zuccala also shared their contrasting views on the upcoming GU272 referendum set for April. The vote will give students the option to support or reject the creation of a semesterly reconciliation fee that would go toward a fund to benefit descendants of the 272 enslaved individuals sold by the Maryland Society of Jesus in 1838 to financially sustain Georgetown.

In reference to the reconciliation fee, Gray argued students have a responsibility to acknowledge the university’s previous wrongs.

“We all attend a university that was built in large part from the work of enslaved people, and it is our duty as members of this community to recognize that,” Gray said to loud applause from the crowd. “It’s not an ill that you or I committed, but it is something that actively affects our time here.”

In response to a question from the Georgetown Heckler, an on-campus satirical publication, Gray also said she would install 272 benches across campus in memory of the number of slaves sold.

Zuccala argued against a mandatory fee and said his platform includes an “opt-out” option for the GU272 fund.

“Georgetown itself made the mistake, not the current students that attend. As a result they should not be forced to pay for the mistakes of their school,” Zuccala said. “The school should be making sacrifices, not the students.”

The candidates also spoke about the importance of incorporating the voices of student advocates in their policy and legislation discussions if elected.

“Personally, I believe that student activism should be better incorporated into the policy pillars and chairs,” Francis said. “The activists are the best people because they are the ones doing the work.”

Gray said she aims to serve as an avenue for student activists to achieve their policy goals.

“Like so many of us have said, the job of the GUSA executive is to be an advocacy wing for the student body,” Gray said. “Allowing students and allowing the people who are trying to make change to do it in a way that is most productive for them and for their goals is absolutely my goal.”

Despite acknowledging the flaws within GUSA, especially amid the student-led Abolish GUSA campaign, the candidates also spoke about the strengths and accomplishments of previous administrations.

Francis said many of GUSA’s previous achievements have gone overlooked, and this oversight gives the organization a bad reputation.

“I think GUSA does a lot of great work that normally a lot of people just don’t know about or other people might have taken credit for,” Francis said. “I was recently speaking with a GUSA senator and I realized that the GoCard came about because of GUSA.”

Nemazi commended the current GUSA President Juan Martinez (SFS ’20) and Vice President Kenna Chick (SFS ’20) for their commitment to amplifying student voices but highlighted the need for the administration to be held accountable for its advocacy promises.

“I really have the utmost respect for Juan and Kenna for coming in such a disillusioned time and holding everyone together,” Nemazi said. “They did a lot of great work in the sense of empowering advocacy groups to do what they’re best fit to do.”

During audience questions, one student asked Gray to shed light on the reason her former running mate, Sam Appel (COL ’20), dropped out of the campaign. Gray replied she and Appel reached the decision that he should step down from the campaign independently. Gray did not share specific reasonings behind Appel’s departure.

“My former running mate decided on his own to leave this campaign because he was no longer a good candidate for the vice presidency, and that was a decision I made independently also,” Gray said.

The GUSA election commission organized the debate, which was hosted in the Healey Family Student Center Great Room. Representatives of campus media outlets, including The Hoya, the Georgetown Voice, the Georgetown Heckler and the Georgetown Review asked questions, along with Hayley Grande (COL ’21), chair of the GUSA senate’s finance and appropriations committee; outgoing executives Martinez and Chick; and students, both on Twitter and in the audience.