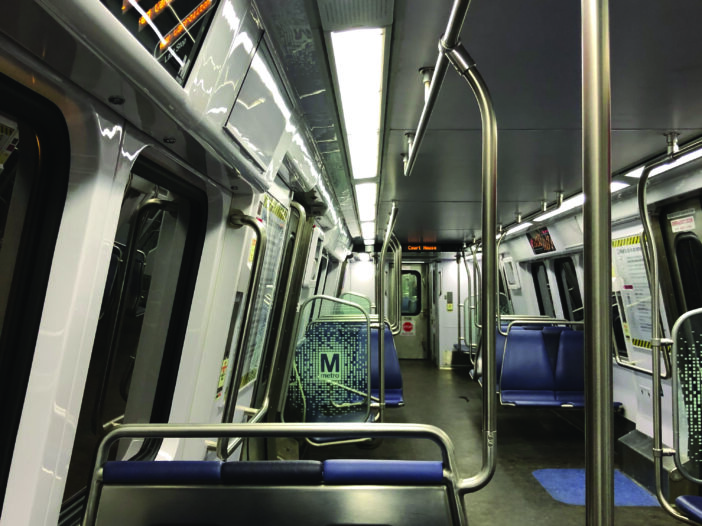 The Georgetown University Student Association (GUSA) proposed a transportation stipend Nov. 8 that would allow qualifying students to receive a stipend for traveling on Metro buses and trains.

Under the proposal, students who commute to an internship in the Washington, D.C. area or students who have expected family contributions of $20,000 or lower would receive a transportation stipend of up to $400 in value. GUSA senators hope this proposal is the first step toward Georgetown University’s implementation of the Metro U-Pass program, which would allow students to receive unlimited free Metro rail and bus rides throughout the D.C. area.

If implemented, the proposal would make Metro services more affordable for students who rely on public transit for work opportunities in and around the District, according to GUSA Senate Speaker Leo Rassieur (COL ’22).

“The stipend proposal, if implemented, would lift some of the financial barriers to participating in internships and other career opportunities that excite people to attend Georgetown,” Rassieur wrote in an email to The Hoya. “Promoting public transportation use would also, of course, be a very green approach to this problem.”

The program, if implemented, would result in an increase in student tuition costs, hindering the university’s inclination to participate in the initiative, according to a university spokesperson.

“Because U-Pass requires enrollment of all students — whether they use the pass or not — and has historically been funded as an addition to student tuition bills with other universities, Georgetown does not currently participate in the program,” a university spokesperson wrote in an email to The Hoya.

The tuition increase presented the biggest barrier to university cooperation when GUSA senators met with administrators to discuss the potential of implementing the program, according to Rowlie Flores (COL ’22), GUSA Senate vice speaker.

“We received some pushback on not having enough data on student’s usage of public transportation systems in the DC Metro area,” Flores wrote in an email to The Hoya. “Some administrators have also expressed concerns regarding the mandatory fee of $136 that would be charged to every student as the Metro U-Pass program is a universal program with no opt-out option.”

According to Rassieur, the transportation stipend is the best interim solution to students’ transportation needs while the future of the U-Pass program remains uncertain.

The university will continue to consider the U-Pass program, while also pursuing other transportation options for students, according to a university spokesperson.

“We are pleased to be working with GUSA and GradGov to explore the idea of joining Metro’s U-Pass program,” a university spokesperson wrote. “Student referendums help to express important student perspectives but do not create University policy and are not binding on the University. We are always looking for creative ways to provide our students with transportation options while safeguarding against increases to the cost of attendance.”

Georgetown remains one of the last schools in the District to not participate in the U-Pass program. George Washington University announced Nov. 5 that it will join the Metro U-Pass program, giving students unlimited rides at a cost of $1 per day and becoming the largest university in the District to offer the passes. American University joined the program in 2016, and 26 schools in the D.C. area are currently part of the program.

Financial barriers should not inhibit student participation in opportunities that require transportation around the District, according to Flores.

“We hope that the administrators consider our proposal thoughtfully as transportation costs do add up, which sometimes prevents low-income students from partaking in opportunities that complement their academic work on the hilltop,” Flores wrote.

This article was updated Nov. 19 to reflect that university administrators are still actively considering the U-Pass program.