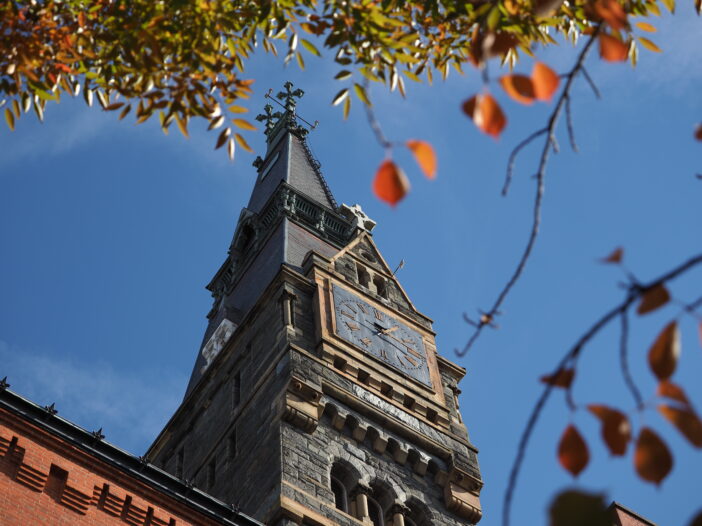 A push to restructure the Georgetown University Student Association (GUSA) failed Nov. 7 after student voter turnout did not meet requisite levels to implement the constitutional change.

While 72.12% of students voted in favor of the referendum, only 20.11% of the student body, or 1,031 students, voted in the election, short of the 25% minimum voter turnout needed for constitutional referendums. If implemented, the referendum would have abolished both the GUSA Senate and Executive and replaced the bodies with a single advocacy assembly.

Despite failing, the referendum was not a complete defeat, according to GUSA Senator Bora Balçay (SFS ’23), one of two senators to introduce the referendum.

“We take this as an approval of our mandate. We got 72% yes, which is over a thousand students’ votes,” Balçay said in an interview with The Hoya. “Even if the rest of the votes needed to meet the 25% requirement were all no votes, the referendum would still have passed because it was such an overwhelming majority.”

“The need for a restructure is crucial and enables participation within the association in policy advocacy so that the leadership team is not always the ones engaging with the administration on issues,” Flores wrote in an email to The Hoya. “The GUSA Senate will be open to considering another act of referendum should it come to the chamber.”

Once the senate approved the referendum, GUSA faced problems of low student engagement on social media and in person, according to Balçay.

“We thought that it would be better to publicize the referendum later than earlier, because if you do it earlier then it loses momentum towards the end,” Balçay said. “So we planned two very intense weeks, but we failed to get turnout on most of our events. We had two town halls, numerous tablings, office hours that were five days a week, and we only managed to engage with a mere 100 students.”

GUSA should have better anticipated the lack of student enthusiasm for the referendum and started campaigning much farther ahead of time, according to GUSA Senator Zev Burton (SFS ’22), who opposed the referendum.

“I don’t think the results were surprising. That was one of the main concerns we had with having a referendum on such short notice,” Burton said in an interview with The Hoya. “People aren’t going to get excited about internal restructuring. They had so much time to publicize and do all this work, and it did not come to fruition.”

In addition to the restructuring referendum, the fall 2021 ballot also included elections for seven first-year seats and four at-large seats in the GUSA Senate. The new class of senators is set to be sworn in Nov. 14.

In upcoming meetings, the newly sworn-in senate will discuss student involvement and continue to push for restructuring, according to GUSA Senator Nirvana Khan (SFS ’24), chair of the policy and advocacy committee.

“This definitely is not the end of the restructure campaign; if anything I believe people in GUSA now have to accept how popular restructuring GUSA is and that the project is not going away anytime soon,” Khan wrote in an email to The Hoya. “Personally, I think the plan moving forward will be focusing on raising awareness and conducting an information campaign so that in the future — whether in the spring or next fall — we can hopefully get this passed.”

GUSA should not consider a second restructuring referendum, according to Burton.

“I don’t think that’s the most important issue right now. Especially with COVID still going on, new registration, stuff going on at Leo’s that still isn’t fully solved, it’s time to start directing our attention out of GUSA and towards the student body,” Burton said.

Despite internal opposition to a second referendum, GUSA will still make an effort to incorporate more student opinions and voices in any upcoming restructuring initiatives, according to Balçay.

“While we are not seeking to redo the whole thing, we are open to all voices, and if anyone wants to get involved in the restructure process, I would encourage them to DM GUSA on Instagram, email GUSA and just get in touch through any channel,” Balçay said.