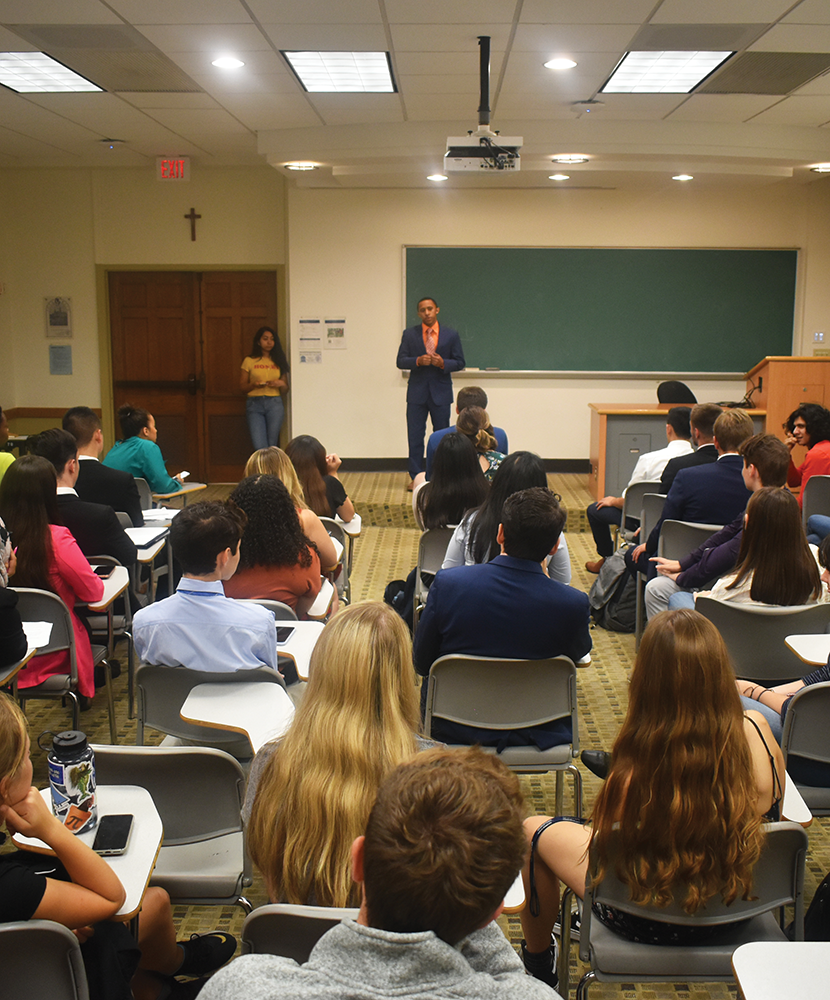 In addition to the 21 candidates who launched their senate campaigns last Wednesday, seven more freshmen successfully petitioned to join the race last week by collecting 100 student signatures on campus. Twenty-six of the 28 total candidates who ran attended the event; each gave a 45-second speech and answering audience questions at the town hall Monday. Candidates Brandon Yusef (MSB ’23) and Juliana Arias (SFS ’20) were absent from the town hall.

When petition candidate Paula Guerra (COL ’23) initially saw the list of prospective senators seeking freshmen seats, the lack of diversity among the candidates motivated her to collect signatures to join the ballot, she said.

“Aside from wanting to be the diversity token, I felt like there just needed to be more representation of women in general and women of color,” Guerra said in an interview with The Hoya.

Zumanah Mahmud (MSB ’23) was one of the few female students who announced her candidacy for the freshman senate seats by the initial Sept. 17 deadline and thus did not have to petition in order to join the ballot.

Mahmud’s platform, which included developing and mandating club diversity and consent training on campus, also intends to expand resources for minority groups on campus, she said.

“My priority would be to break down barriers for marginalized groups and get people access to opportunities and benefits,” Mahmud said.

Ingrid Wilder (COL ’23), another petition candidate, decided to join the ballot because of concerns she had with the inaccessibility of certain student resources such as the university’s Counseling and Psychiatric Services, she said.

“It just really frustrates me when we were being treated like customers and not people,” Wilder said in an interview with The Hoya.

Lack of engagement with GUSA was also a popular issue among the candidates. Expanding student participation and activism in GUSA on relevant campus topics was at the heart of Kelvin Doe’s (COL ’23) campaign plan, he said.

“My platform is entirely focused on the people,” Doe said in an interview with The Hoya. “There’s no aspects of my own advocacy in there because I feel before we can fix anything else about GUSA, we have to work on getting people together and mobilizing on issues.”

In his campaign, Doe hoped to inform students about what GUSA’s role on campus is in an effort to make the organization’s operations more transparent, he said.

“I thought this would be an event where the constituents would ask us questions; it wasn’t promoted as such, so that’s my mistake,” Hopkins said in an interview with The Hoya.

Despite some candidates’ dissatisfaction with turnout, others were pleased to be granted the opportunity to share their vision for the Georgetown community. The teamwork fostered at this town hall was encouraging, according to Henry Dai (SFS ’22), who ran for an at-large seat.

“I think tonight was a great opportunity to kind of spell out our vision. I enjoyed listening to a lot of candidates today,” Dai said in an interview with The Hoya. “I hope to foster a culture of teamwork where we get working on these issues.”

“It just reaffirmed that whoever gets it — I think we’re all going to be very happy for each other,” Taber said in an interview with The Hoya. “I think we all agree on a lot of baseline things.”