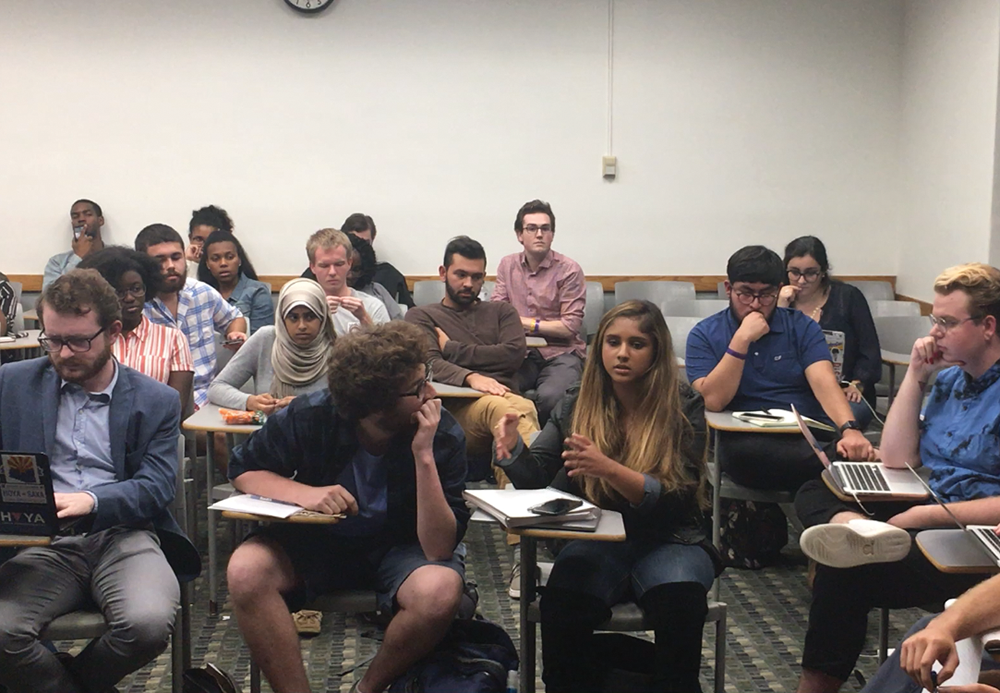 The open seats include seven vacant spots for freshmen, four at-large seats available to students from all years, and three open seats for senators from the junior class. Vacancies for the class of 2020 resulted from the appointment of former transition chair of the senate Juan Martinez (SFS ’20) as president Sept. 16, and from senator Josh Sirois (SFS ’20) being abroad for the fall semester.

Chad Gasman (COL ’20) resigned from the Senate after the executive resignations, creating another senate seat vacancy for the junior class.

“I left for mental health reasons primarily,” Gasman said. “As a survivor, the situation was too much to continue to be a part of GUSA.”

Despite Gasman’s resignation, they expressed confidence in Martinez’s ability to move GUSA forward.

“I wholeheartedly trust Juan to push GUSA in the right direction,” Gasman said.

Winston Ardoin (SFS ’21), a candidate running for an at-large position, said the surfacing of the allegations against Nair almost dissuaded him from running this semester.

“The recent events actually led me to think about not running,” Ardoin wrote in an email to The Hoya.

Senate candidate Alec Camhi (COL ’20), who is running for one of the junior class senate seats, believes this election will be challenging for some senate candidates.

“I think that this would’ve actually been an easier [election] to sit out than get into,” Camhi said. “It’d be easy to kind of keep an arm’s length from the fight.”

Ardoin is concerned that the GUSA executive resignations may have been many Georgetown students’ first large-scale exposure to GUSA and its representatives.

“Before the recent events, I cannot say that I thought many people even knew or understood what GUSA did,” Ardoin wrote. “Quite frankly, this event has, for the first time, introduced many to the world of our student government. Sadly, these events highlight many of the negative factors both in our school as a whole and in our student government.”

The resignation of the executive might inspire more students to vote in the GUSA senate elections this fall, Graisnt Castle, Vice Chairman of the GUSA Election Commission, wrote in an email to The Hoya.

“With heightened news and scrutiny of GUSA, I wouldn’t be surprised if we saw higher turnout than normal this fall,” Castle wrote. “The Election Commission has remained committed, since the beginning of the resignations and recent events in GUSA, to ensuring that the Senate elections take place as planned.”

Zaki Thabet (SFS ’21), a candidate running for an at-large position, decided to run for senate after the resignations. Thabet created a platform on the idea of a more transparent GUSA.

“In order for GUSA to get any kind of good reputation back, they really need to be focused on outreach and on reaching students where they stand on campus, and not forcing students to go to GUSA to find out more,” Thabet said in an interview with The Hoya.

Elections for the senate of the Georgetown University Student Association will take place Sept. 30. Fourteen seats are open this semester.

This article was updated June 23 to indicate the absence of Title IX or Office of Student Conduct complaints against Nair and to include comment from Nair.