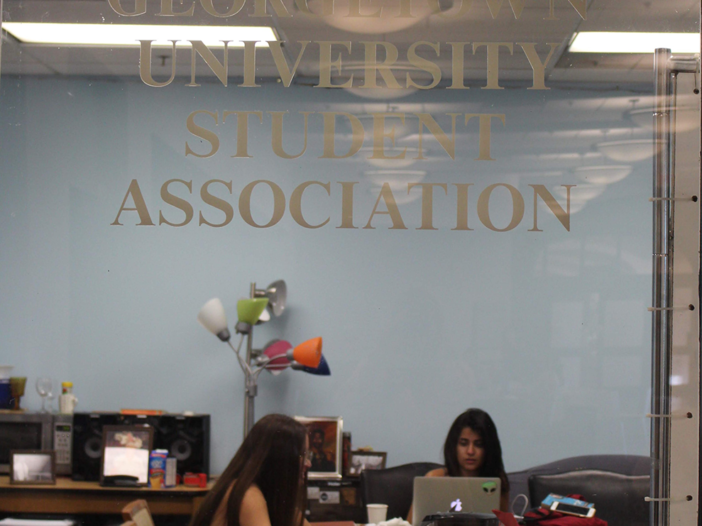 Before Mucher’s resignation Jan. 26, the Ethics and Oversight Committee had begun drafting articles of impeachment against her because of her several meeting absences, which exceeded the three allowable number of absences for senators. Mucher, a survivor of sexual assault, said she missed meetings because of her struggles with her mental health, which was negatively affected by insensitive conversations in GUSA surrounding issues of racial violence and sexual assault, according to Mucher.

Mucher, who had been informed of imminent impeachment plans against her by another senator before the meeting, decided to announce her resignation to ensure she would be able to share her perspective and experience, she said in an interview with The Hoya.

“I think that if I didn’t talk about all of this, it would just kind of vanish into nowhere,” Mucher said. “Especially around the time when I chose to actually resign was because, if I was about to be removed anyway, and if I was removed, it would have just been like, ‘Oh yeah, Alexandra didn’t show up to the meetings, and then she was removed,’ and that’s not an accurate depiction of what happened.”

The general attitude and conversations in GUSA surrounding sensitive topics such as racial violence and sexual assault on campus made it difficult to make progress on such issues through legislation. The topics’ treatment in the senate also made some survivors and people of color uncomfortable, according to Mucher.

Her choice to publicize her resignation and share her experiences in GUSA help reveal the flaws within the organization to the student body, Mucher said.

“I think that GUSA needs to be held accountable for the ways in which they routinely fail people, not just survivors, but also people of color, low-income communities, queer students,” Mucher said. “I also think that GUSA says this thing where they say that they’re pushing for diversity, but the environment is actually extremely toxic, and I don’t want people to go into it without knowing what to expect, because that’s what happened to me.”

Mucher noted an Oct. 6 senate discussion on a bill for a potential climate survey about racial issues on campus. The senate discussed including questions regarding student experiences with the Georgetown University Police Department, and some senators argued the questions in the survey were antipolice. While the bill ultimately passed unanimously in the senate, the initial pushback reflects GUSA’s lack of understanding about racial issues, according to Mucher.

“People aren’t really sensitive to the fact that for people who don’t look like them, the police are an actual threat, and people have had experiences with the police that leave them traumatized and upset,” Mucher said. “They just talk about it like it’s just this arbitrary issue that doesn’t really affect anyone and can just be talked about completely neutrally, which kind of shows the bias of GUSA.”

After Mucher had accrued two absences, the Ethics and Oversight Committee met with her Nov. 8 to discuss reasons behind her missing GUSA events, according to Ziac. These absences were for missing events, such as tabling. Mucher did not know these events, outside of the weekly senate or committee meetings, were mandatory, according to Mucher. The rule that made such events mandatory for senators to attend had been presented and passed the day the fall 2019 class of senators, including Mucher, was sworn in, according to Ziac.

Mucher had not submitted any excuse forms, which are available to senators who need to miss meetings, and did not wish to discuss issues she had with the GUSA environment, according to Ziac. Mucher also did not inform the Ethics and Oversight Committee of the reasons behind her absences in advance, Ziac said.

“We also tried to figure out more about the senate culture, if that was affecting her in any way, but for whatever reason she didn’t really want to talk about that, so that didn’t really factor into our discussions too much, which is kind of unfortunate in my opinion because that was something we were looking to improve,” Ziac said.

Many of the meetings Mucher chose not to attend were because they had to do with sexual assault, however, which she did not feel comfortable discussing in GUSA’s environment, Mucher said. The Ethics and Oversight Committee spoke with Mucher again via FaceTime and Ziac texted her Dec. 3 after she accrued over four absences to inform her that the committee was considering impeachment, according to Ziac. Mucher then clarified to Ziac that her mental health and discomfort with insensitive conversations in GUSA were reasons behind her absences.

Mucher’s experience reflects the need to reform punitive measures against senators to better account for the diverse experiences of the student body, especially those of students within marginalized communities, Speaker of the Senate Juan Martinez (SFS ’20) wrote in a news release sent to The Hoya.

“In specific regard to the resignation of Senator Mucher, I believe it is unfortunate that the Senate has specific thresholds for unexcused absences that, upon being met, commits the Ethics and Oversight Committee to pursue impeachment against senators regardless of individual situations,” Martinez wrote. “I believe there needs to be a cultural shift on campus in the way we hold others accountable. That shift should be toward a conflict-resolution approach that is conscious about factors that disproportionately hinder marginalized students.”

The GUSA Senate should create greater transparency beyond public statements student representatives release as they do not accurately reflect the conversations surrounding sensitive topics within the senate, Mucher said.

“I think that the student body should know who’s representing them, truly, and the decisions that they’re making, and not just the things that they see them send out, which are reactionary pieces and don’t actually have any weight to them,” Mucher said. “The student body’s already extremely disillusioned with GUSA, and I think that this shows why.”