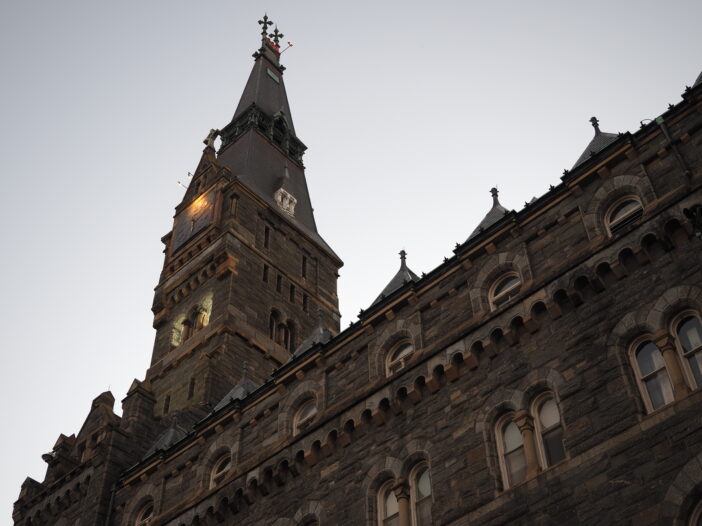 Georgetown University Student Association (GUSA) Acting Vice President Thomas Leonard (COL ’23) will be up for confirmation as vice president of GUSA at a Senate meeting Dec. 5.

GUSA President Nile Blass (COL ’22) nominated Leonard to replace Vice President Nicole Sanchez (COL ’22), according to Leonard. Leonard announced his nomination via his public LinkedIn profile the afternoon of Dec. 1; Leonard confirmed the news in an interview with The Hoya that evening. Sanchez officially announced her resignation via a public Twitter statement on Dec. 2.

Sanchez is taking a medical leave of absence but will remain involved with ongoing GUSA projects, according to a statement she posted on her public Twitter.

“I’m so grateful for all the amazing work I was able to get done with amazing people,” Sanchez wrote.

“I hope that everyone respects Nicole’s decision to step down, and I know that she has full faith in the rest of the GUSA leadership team, including Thomas, to continue the important work we do to help marginalized communities at Georgetown,” Rassieur wrote in an email to The Hoya.

In a Slack message sent to all GUSA members obtained by The Hoya, Blass said that Leonard will be sworn in at the Senate meeting Dec. 5. However, according to GUSA’s constitution, Leonard must receive a majority vote of the Senate in order to be sworn into office following his nomination. GUSA leadership did not formally inform GUSA staff of the decision until the afternoon of Dec. 2, according to Slack messages from Blass and Sanchez.

Amid the transition of power, GUSA leaders experienced a lack of communication from remaining staff members; before speaking to The Hoya on Dec. 2, GUSA Executive intern Gitanjali Reddy (COL ’25) had not been informed by remaining GUSA leaders of Leonard’s nomination for vice president.

“The executive staff meetings have been canceled for the past couple of weeks,” Reddy said in a phone interview with The Hoya. “I didn’t even know Thomas was being sworn in as vice president.”

According to Reddy, the last time the whole executive staff met together was in late November, as GUSA members have primarily been working on separate group projects, including the National College Consortium and the GU272 petition released Dec. 1.

GUSA Senator Zev Burton (SFS ’22) also said he was not aware of the leadership change.

“I was made aware of her resignation by a tweet from The Hoya,” Burton wrote in a text message to The Hoya.

Working as chief of staff served as preparation for stepping into the role of vice president, according to Leonard.

“As chief of staff, my roles were very much so related to support staff tasks, such as making sure everyone in the organization was healthy as a person, as a student, as a member of GUSA,” Leonard said in a phone interview with The Hoya. “It was sort of a natural function of my accomplishments within the organization to step up as vice president.”

Leonard has shown energy and commitment toward GUSA matters and will transition smoothly into the position, according to GUSA Senate Vice Speaker Rowlie Flores (COL ’22).

“I think Thomas will do a fantastic job,” Flores wrote in an email to The Hoya. “He has been helping with a lot of policy advocacy and has been at the forefront of many conversations with the administration on issues such as dining and student safety.”

According to Leonard, his transition into the role of vice president will be a continuation of the work he has already done at GUSA.

“My responsibility has always been to advocate on behalf of students who are vulnerable at a university like Georgetown,” Leonard said. “My serving as vice president is sort of meant to continue carrying out those goals, more broadly.”

Former GUSA Community Outreach Director Genevieve Grenier (MSB ’24) will take Leonard’s place as chief of staff, a position that does not require senate confirmation, according to Grenier.

“I am honored to take on the job, and I am excited to keep doing the important work to serve our community,” Grenier wrote in an email to The Hoya.

Leonard, if confirmed, will serve Georgetown students in a beneficial way, according to Flores.

“I will be supporting Leonard’s confirmation on Sunday and hope that my peers in the Senate feel the same way,” Flores said.

This article was updated Dec. 3 to correct Reddy’s title which was incorrectly labeled on GUSA’s website.