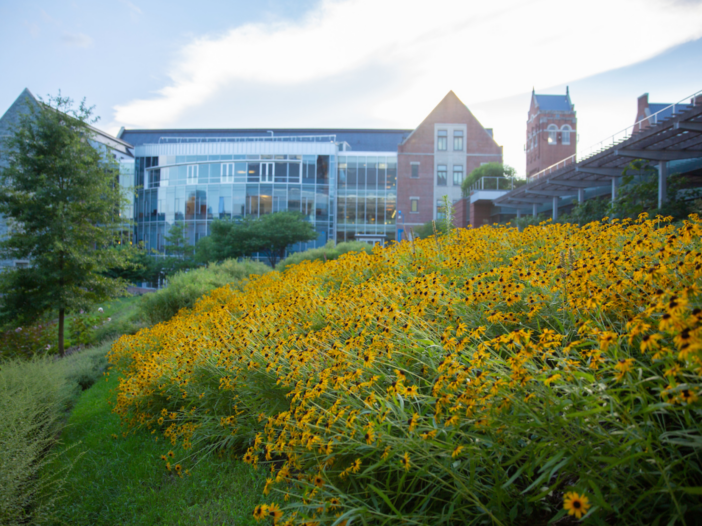 Georgetown University students plan to send a finalized proposal for an environmental studies major to university administration later this month, advocating for a program with an interdisciplinary framework of science, politics and humanities while tackling environmental issues.

A Georgetown University Student Association working group has spent the past year drafting the major proposal and recently submitted it to the College Curriculum Committee, a ten-member faculty board that reviews proposed programs, in March. The working group is now revising the proposal and plans to submit it to the Provost’s Office for implementation in the fall.

While Georgetown offers majors in environmental biology and science, technology and international affairs, there is currently no opportunity for students to pursue a humanities-based major with an intersection in environmental policy, according to Rowlie Flores (COL ’22), GUSA Sustainability Senate Co-Chair and a member for the working group.

“The reason why I wanted to push for this project is because I realized that I wanted just the environmental issues when I got to Georgetown,” Flores said in a Zoom interview with The Hoya. “But I realized that I needed to be in some sort of STEM course load, and I did not really want that.”

The environmental biology major emphasizes a scientific framework, including courses in biology, chemistry and math, and the STIA major in the School of Foreign Service, while following the SFS core curriculum, includes many science labs as well. The proposed environmental studies major incorporates several environmental science courses but also focuses on humanities and policy courses, offering a more interdisciplinary track.

The working group will meet this month with the College Executive Council, the main academic policy-making group, before sending the proposal to the Provost’s Office, and the major should be open in the fall for the Class of 2023, according to Flores.

The administration has largely been in support of the major, but the GUSA working group has helped move the project along faster, according to Flores.

“They were already planning to have this as an ongoing project two years from now, but because of the GUSA proposal they were like, why not speed it up by a year, so that is kind of why it is happening now instead of two years from now,” Flores said.

While there is significant administrative and faculty support, administrators still have concerns about finances and resources to back the program, according to Scott Kase (MSB ’23), a member of the working group with a minor in environmental studies.

“There is some hesitation, especially with COVID there are resource constraints,” Kase said in a Zoom interview with The Hoya. “I know that a problem we have had is how can we expand new course offerings and hire new teachers and stay within the budget and make sure that this is something we get passed?”

Despite the financial constraints, an ENST major is important to Georgetown values and would allow students to study environmental issues in-depth, according to Randall Amster, co-director and teaching professor of environmental studies and a member of the working group.

“Having an ENST major here would help keep us on par with our peer institutions, and further would offer an opportunity to expand our environmental offerings within the unique context of the University’s mission, values, and location,” Amster wrote in an email to The Hoya. “Equally important, having a major in Environmental Studies would provide greater visibility for the critical issues and concerns that animate the program and drive student interest, adding an important component to existing curricular and co-curricular efforts.”

Many other universities offer similar environmental studies majors, including George Washington University, American University and Johns Hopkins University, and Georgetown should follow these examples and implement its own program, according to the GUSA policy proposal.

“Environmental issues become an obligation of social justice, which, as a Jesuit institution, we have committed to addressing,” the proposal reads. “With the advent of climate change, environmental studies is becoming a rising academic interest for current and prospective students.”

One of Georgetown’s core Jesuit values — care for our common home — emphasizes the importance of caring for the earth and advancing environmental sustainability and justice.

Georgetown supports the courses centered on environmental studies in addition to environmentally focused research initiatives, according to a university spokesperson.

“The University is supportive of exploring course options, including majors and minors, that reflect our values and the broad interests of our students,” the spokesperson wrote in an email to The Hoya.

As the working group is preparing to present their revised proposal to the administration later in April, the biggest challenge has been finding faculty that will permanently teach the new curriculum, according to Flores.

“We really want to hire tenured professors to teach the core courses and it is kind of hard to do that right now because of COVID,” Flores said.

Although there are some logistical concerns, the working group is optimistic about the project’s progress and is confident the university is working to implement the program, according to Amster.

“The process has been very constructive and effective, resulting in a comprehensive proposal that is being shared with various governance committees,” Amster wrote. “While there are still many steps along the way and nothing has been decided about this yet, the initial feedback we’ve received has been positive.”