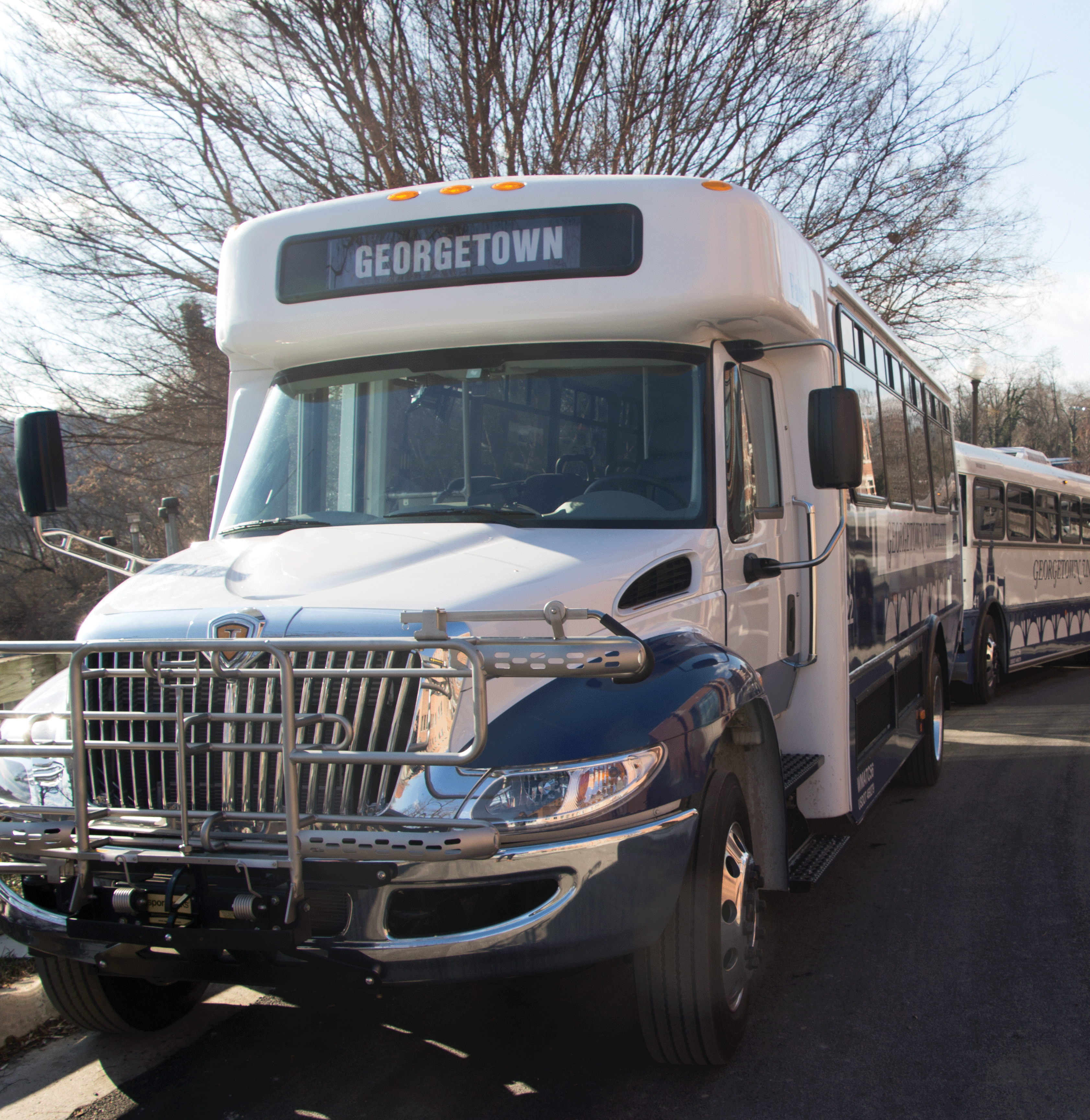 A joint effort with Georgetown University Student Association, the spring pilot service would implement a more frequent Saturday service to Dupont Circle from noon to 7 p.m., running in 20-minute intervals.
The Dupont route will also stop at the Trader Joe’s on M Street.

A second Saturday shuttle will also run every 15 minutes and transport students to Safeway on Wisconsin Avenue from noon to 3 p.m.

The GUTS pilot program will be funded by reallocating $36,000 currently dedicated to a late-night shuttle from Adams Morgan that runs between 10 p.m. and 3 a.m. on Thursdays, Fridays and Saturdays. This service is being cancelled due to the lack of ridership in the Adams Morgan service.

Planning and Facilities Management Vice President Robin Morey said the GUTS pilot program would improve access to the District on weekends for students.

“The objective is to provide greater connectivity on weekends within the existing resource level,” Morey said. “The goals are to provide improved services. Success will be demonstrated by increased ridership and client feedback.”

According to GUSA Master Planning Chair Zac Schroepfer (MSB ’19), expanded weekend shuttle services will ensure access to the District for students from all socioeconomic backgrounds.

“Georgetown proclaims itself to be a university that’s in the capital, at the heart of the nation’s capital. But unfortunately, as many students know, it’s very hard to access the actual city of Washington, D.C.,” Schroepfer said. “We’re really aiming to bridge that divide and shrink any socioeconomic gap by allowing all students to have the same access to the benefits of Washington, D.C.”

“We’re also looking to increase food accessibility, ensuring that students have easy access to both Safeway and Trader Joe’s, which are both pretty accessible and affordable options for students to be able to access food that they can then cook for themselves on campus,” Schroepfer said.

“A couple years ago they added what they’re calling weekend service, but it’s really, really inadequate. It’s just on Saturdays, it’s just during the academic year and there is one bus with a wait time of 80 minutes, which is ridiculous,” Goldstein said. “It makes more sense to Uber or take a city bus and we’ve heard from a lot of students that that’s a pain, that it’s a socioeconomic inclusivity issue.”

The weekend pilot service joins GUSA’s other initiatives to improve on campus transportation for students.

The success of Turkey Shuttles, which were GUTS shuttles to Reagan National and Dulles airports for students flying home for Thanksgiving, led Office of Transportation and Management to introduce a Holiday Shuttle program for the end of the semester. The program will provide free transportation to and from Reagan and Dulles at peak travel times for winter break.

According to Schroepfer, GUSA is looking to expand weekend transportation options beyond the GUTS weekend pilot service and is currently in conversation with the Washington Metropolitan Area Transit Authority to provide students with discounted weekend passes on the Metro’s bus and Metro services. The passes would be incorporated into student tuition.

Schroepfer, who will serve as one of GUSA’s representatives in its discussions with the WMATA Board of Directors, said he was optimistic about the Metro project.

“While this pass is in its fledgling state, we are excited to see where further cooperation with WMATA and the District government can take us,” Schroepfer said.

“If the spring pilot is successful and we see that a lot of students are riding the pilot for spring, then it’ll be very clear proof to the Office of Transportation Management and to the board that this is something to be funded long term,” Goldstein said.