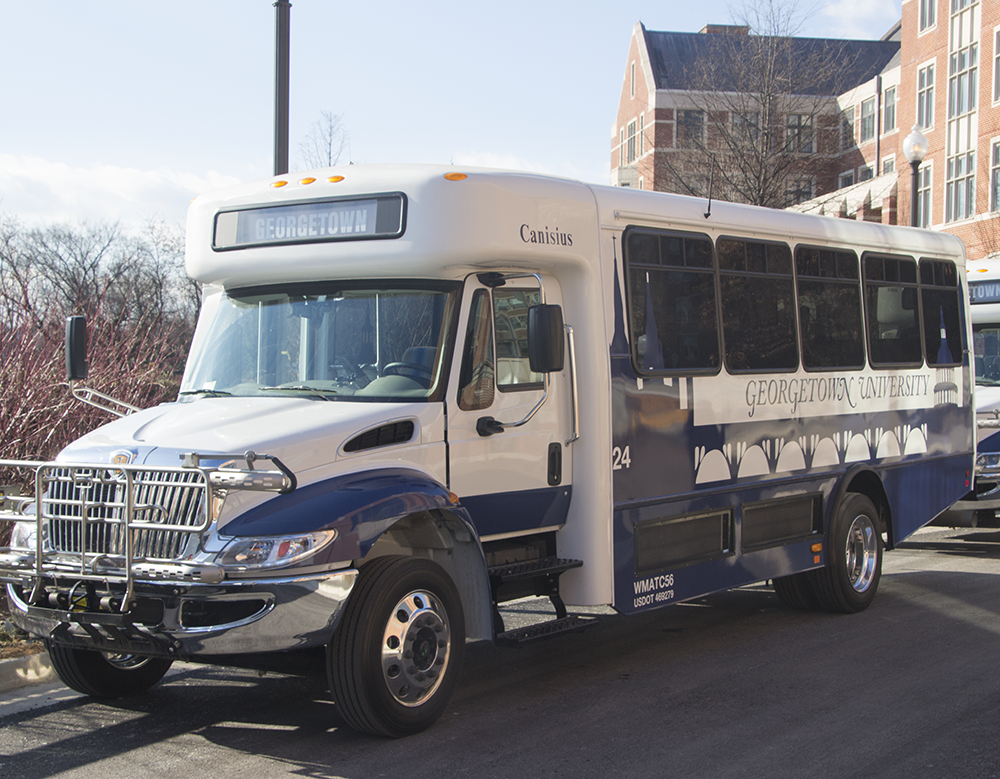 In response to an IdeaScale petition filed in 2013, the Georgetown University Transportation Shuttle buses will link the main campus with Capitol Hill beginning Feb. 17. The three office buildings of the House of Representatives, which are located adjacent to one another, will be an additional stop on the route that runs from the main campus to the Georgetown University Law Center.

“Simply, the change was in response to student demand to improve the GUTS services and we were able to accommodate the request,” Morey wrote in an email to The Hoya.

Morey said that no additional cost was anticipated for the new stop. However, the new stop created logistical difficulties that took time to negotiate.

“Adding the stops had to be done in a way that was not going to interfere with schedules of the shuttles that run between Main Campus and the Law Center, involved specific on Capitol Hill where buses are allowed to embark and disembark passengers, and to keep in mind budgetary demands,” Associate Vice President for Federal Relations Scott Fleming (SFS ’72) wrote in an email.

Fleming explained that the schedule had been designed to accommodate student interns who would be disembarking at specific locations on Capitol Hill.

“The schedule includes peak times in the morning, midday and the end of the typical workday. It would be impossible to fit everyone’s internship schedules, but we are optimistic, with some flexibility on students’ parts, many will be able to take advantage of this service,” Fleming wrote.

Anebi Adoga (COL ’16) submitted a proposal for a GUTS stop on Capitol Hill to IdeaScale in fall 2013, receiving 656 upvotes and 5 downvotes. He said he initially thought of the proposal while riding the GULC shuttle.

“I remember thinking, ‘Wouldn’t it be neat if it just made stops at a few of those places,’” Adoga said.

The additional stop provides students with internships on the Hill a more direct connection from campus to their jobs. Most student interns currently take the GUTS bus to either the Dupont or Rosslyn Metro and then take the Metro to Capitol Hill.

Adoga estimated that a student who has an internship on the Hill three days a week spends roughly $18 per week on the Metro.

In addition to making transportation more convenient for student interns, Adoga said he hopes the added stop will make internships more popular throughout the Georgetown community.

“It’s going to encourage more students to pursue Hill internships because it will be logistically easier to do so,” Adoga said.

The Georgetown University Student Association followed the IdeaScale petition with a survey in the spring to gauge the support of student interns.

Although GUSA is no longer involved, with Adoga having taken the lead, Adoga said the survey demonstrated the extent of the demand for the additional stop and brought the issue to the administration’s attention.

“I really want this to be a grassroots bottom-up thing, so getting that support took some time. And once I was able to do that, we had to go through and see which of these ideas is the most feasible,” Adoga said. “That was just a step to show that there is tangible popular support for this initiative.”

Adoga said that final approval was needed from GULC before the project could become reality, adding that administrators were helpful and open to student input throughout the process.

“There were approvals that needed to happen from the Law Center, from the city, you know, so many moving parts,” Adoga said. “I’m very appreciative of the fact that they … listened on this. This was one of the things where it was student input that prompted administrative action.”

Fleming, a former Georgetown student intern, also said he hopes more students will take advantage of the opportunity to work on the Hill now that transportation is easier.

“Having interned for my home-state senator when I was a Georgetown student before the GUTS bus system even existed, I think it is great that the university has been able to make this work. Now, I hope we will see strong ridership taking advantage of the service,” Fleming wrote.

John Reilly (COL ’17) currently interns three days a week for Rep. Paul Tonko (D-N.Y.). He elaborated on the costs of transportation and said it takes him about two hours round trip to get to work by taking both the GUTS bus and the Metro.

“I was surprised by the costs. It’s surprising how quickly it adds up. You feel like you’re putting more money on your Metro card every other day,” Reilly said.

Reilly said he is excited about the new GUTS stop and thinks it will be a positive change for Georgetown students.

“It would make it a lot easier for students who already have internships and it’s also a great incentive for students who are on the fence about interning because it makes it so much easier,” Reilly said. “It lowers the transaction cost, you probably wouldn’t have to pay as much, and it makes it quicker to get there.”