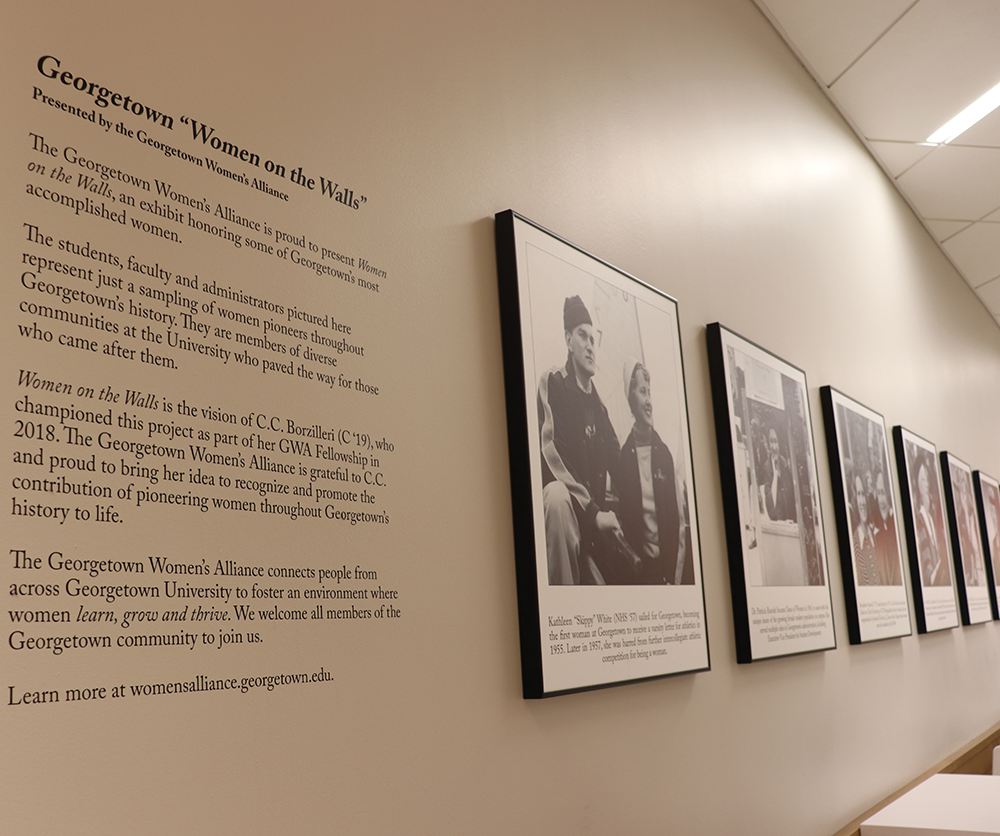 Three Georgetown alumnae shared their stories of breaking gender barriers in college at the opening of the Georgetown Women Alliance’s “Women on the Walls” photography exhibit March 14.

Georgetown became fully co-ed in 1969, when the College of Arts and Sciences became the last of Georgetown’s undergraduate colleges to admit women. GWA is a collective of staff, faculty, students and alumni for professional training and collaboration around women and leadership, and curated the exhibit, which depicts 12 portraits of women from Georgetown’s history, each with captions sharing their stories.

Held in Hoya Court, the “Women on the Walls” exhibit opening included remarks from three women who were featured in the exhibit. The university’s first female provost Dorothy Brown, Artrice Valentine Bader (GRD ’66), the first Georgetown student to receive a Ph.D. in biology, and The Hoya’s first female editor-in-chief Bernadette Savard Tramm (CAS ’73) returned to campus for the event.

C.C. Borzilleri (COL ’19) led the project to memorialize the legacies of Georgetown women as part of her GWA fellowship, which connects undergraduate and graduate students with mentors and networking opportunities within the GWA. The exhibit’s opening comes two years after a collaborative effort from Borzilleri and the GWA that included archival research on the women whose portraits are featured in the exhibit.

Brown joined Georgetown’s history department in 1966 as the department’s only female faculty member. Brown told the audience she participated in the vote admitting women to the College in her first year.

Brown filled numerous roles at Georgetown, including director of the American studies program and chair of the department of history.

“The Jesuits turned out to be very supportive of women, I found, and colleagues did. When I left, women were 39 percent of the faculty, and I’m sure it’s been growing ever since,” Brown said.

Brown left Georgetown in 2001, and women currently make up 50.5 percent of the university’s faculty.

Before the university became fully co-ed, Bader was a pioneer for male and female Georgetown students alike. She began graduate school in 1963 and was the first student of any gender to earn a doctorate in biology at Georgetown.

“I spent 32 years at the NIH split between research, which was always my first love, and health-science administration,” Bader said at the opening.

Tramm, a member of the College’s inaugural class of women, became editor-in-chief of The Hoya in 1972. Tramm’s time at The Hoya spanned tumultuous political moments for the country that often coalesced in Washington, D.C., giving student reporters the chance to address major stories, according to Tramm.

“The challenges were really more how to cover and personalize some of the major events that were sweeping across the country in those years,” Tramm said in an interview with The Hoya. “There were a lot of other forces converging, with the women’s lib movement and the anti-war movement, and there was a great feeling of students being empowered to really drive change.”

Exhibits like “Women on the Walls” are part of GWA’s ongoing efforts to create programming regarding women and gender on campus, according to Lauren Mullins, GWA communications co-chair.

“In addition to giving Hoyas a chance to learn about some of the most unique and accomplished women in Georgetown’s history, it also demonstrates the opportunities students have to effect real change on campus,” Mullins wrote in an email to The Hoya.

“Women on the Walls” is an example of how the GWA Student Fellowship Program helps students convert ideas into action by connecting them with relevant leadership, project and initiatives, according to Mullins.

“C.C. saw a chance to make a difference, and GWA provided her with the space and resources to make it happen. We could not be more proud of her hard work,” Mullins wrote.

Borzilleri worked hard to ensure that the stories picked for the exhibit reflected the diversity of Georgetown female students, she said at the exhibit’s opening.

“Having strong female role models is incredibly important for women at Georgetown, and one of the goals of this exhibit was to ensure that we all had people to look at and to be inspired by for their incredible accomplishments,” Borzilleri said.