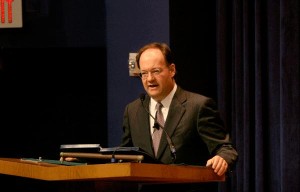 IN FEBRUARY 2001, Georgetown made history, naming its first lay president to succeed Fr. Leo J. O’Donovan, S.J. at the helm of the university. For the last eight years and counting, John J. DeGioia has been living that history as Georgetown’s 48th president.

In his inaugural address, delivered at the DAR Constitution Hall on Oct. 13, 2001, DeGioia said he viewed Georgetown’s mission as rooted in meeting and overcoming challenges.

DeGioia spoke about the university’s religious identity in his address, calling for the community to “live the tensions to be authentically Jesuit, authentically Catholic, to provide an authentic context for the meeting of the church and the culture, while sustaining the virtues and practices of the academy.”

O’Donovan lauded the university’s choice of DeGioia as his successor, citing his breadth of experience at Georgetown and his key role in negotiating the takeover of the Georgetown University Hospital by MedStar Health in 2000. O’Donovan faced several controversies during his tenure, including questioning of the university’s adherence to Catholic traditions.

Upon assuming office, DeGioia made clear his awareness of the hurdles facing the university in the 21st century. He cited Georgetown’s financial standing as a principal challenge, noting that the university was “underendowed in comparison to the schools that we are competing with.”

In his 12 years in office, O’Donovan focused his energies on building the university’s endowment – it nearly tripled during his tenure, from $240 million in 1989 to over $740 million in 2001 – and began construction on what became the Southwest Quadrangle. His successor committed to continuing this growth.

DeGioia graduated from the College of Arts and Sciences in 1979 and subsequently served in a number of administrative capacities at Georgetown – including assistant to the university president, dean of student affairs, associate vice president and senior vice president. He took the reins as president in July 2001.

“We wanted someone dedicated to what this university is all about,” Ziegler said. “He has a real appreciation for academic activities, scholarship and building outstanding relationships with faculty.”

As the first lay president at a Jesuit university in the United States, DeGioia told The Hoya one day after the announcement that he was humbled by his selection.

“I’m honored to take on this new role and to continue working with our distinguished faculty, staff, students, Jesuits, alumni and friends,” DeGioia said. “This is a challenging and exciting time to be in higher education. Georgetown’s unique mission as a Catholic and Jesuit student-centered research university has never been more important on the national higher education landscape.”

At least one Catholic official, however, expressed some degree of disappointment with the lay selection.

“While many of us were hoping that a Jesuit priest might be found for the leadership of this important Jesuit institution, I welcome Dr. John DeGioia,” said then Cardinal Theodore McCarrick of the Washington Archdiocese. “He is known and respected as a fine Catholic educator.”

In June 2001, DeGioia, 44, moved into a home recently purchased by the university for $1.4 million on Parkglen Court in northwest D.C. with his wife Theresa (CAS ’79), just prior to the birth of their son, John Thomas, on June 10.

At his first meeting with campus press in September 2001, DeGioia outlined his institutional priorities, centered on three Fs: faculty, financial aid and facilities.

At the time, campus development stood at the forefront of a slate of issues facing the university; Georgetown was embroiled in a struggle with the D.C. Board of Zoning Adjustment over its 10-year campus plan. The BZA had attached several conditions to the campus plan and Georgetown was denied a postponement of the implementation of the BZA’s decision in September. DeGioia announced the university would file a lawsuit against the BZA, which Georgetown eventually won in the D.C. Court of Appeals in 2004.

Daniel Porterfield, currently senior vice president for strategic development and interim athletics director, has known the president since DeGioia, then hall director in Copley Hall, interviewed him to become a resident assistant in 1981. Reflecting on his tenure, Porterfield said DeGioia has been a tireless advocate for Georgetown in his eight years in office.

“Most people don’t realize just how much work and stamina are required to serve as Georgetown’s president,” Porterfield said. “DeGioia puts his heart into his role. He has helped the institution strengthen its finances, build much-needed facilities, renew our Jesuit identity and become positioned for impact in key areas such as interreligious dialogue, business and global studies.”

Since Georgetown’s leadership took the university’s presidency in a new direction by appointing a layperson president eight years ago, DeGioia has lived up to the novelty of the decision. With an emphasis on campus development and fundraising, he has sought to take Georgetown beyond the limits of what his predecessors accomplished. Needless to say, Georgetown’s next president will inherit a university very different than the one O’Donovan left to DeGioia eight years ago.”