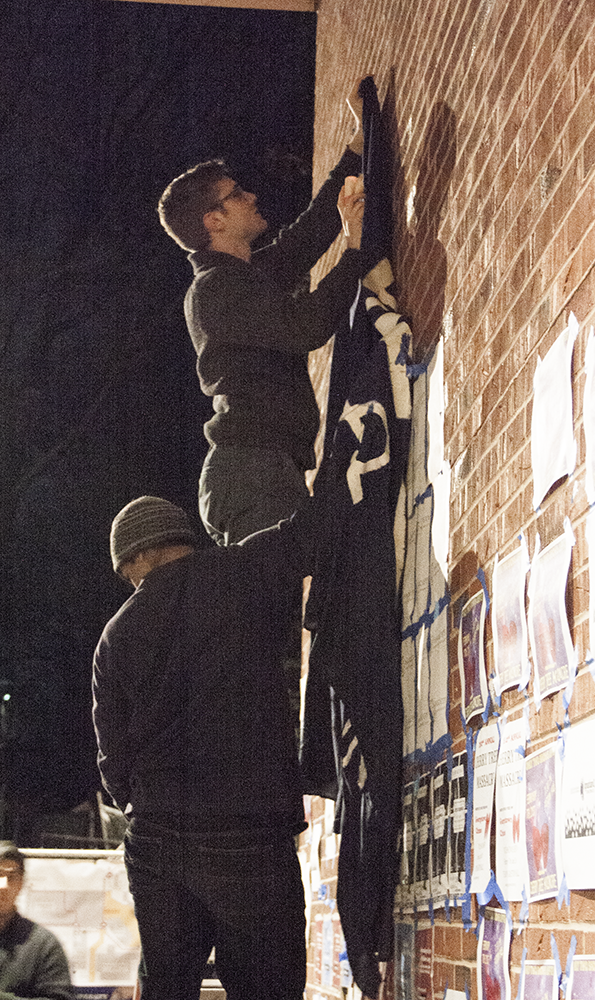 The six tickets in this year’s Georgetown University Student Association executive race have fielded a mixture of GUSA insiders and outsiders, a marked change from last year’s insider-dominated race.

On campus, Luther is editor-in-chief of The Georgetown Heckler, a member of the Georgetown Improv Association, an employee at Students of Georgetown, Inc. storefront Vital Vittles, a tour guide with Blue and Gray and a New Student Orientation captain, according to his campaign bio. Rohan, who transferred from George Mason before his sophomore year, is involved with the Heckler and the Improv Association, as well. He also serves as a transfer mentor and writes for The Georgetown Voice, according to his bio.
Luther said that he does not see their lack of affiliation with GUSA as a disadvantage.

In contrast to Luther and Rohan, Margolis and Shymanksy are both involved with GUSA. They are the only ticket in which both the presidential and vice presidential candidates are currently involved in GUSA.

Margolis, who transferred from The George Washington University her sophomore year, is the GUSA secretary of transfer affairs, and previously served as director of advancement and alumni for the Georgetown University College Democrats. She is also a Georgetown dance company member and a transfer peer adviser (full disclosure: Margolis was previously an associate in The Hoya’s Sales Department).

Shymanksy is the co-director of the Student Advocacy Office — a GUSA institution — a Blue & Gray tour guide and a student representative to the Alumni Board of Governors, in addition to previously serving on The Georgetown Voice’s editorial board. Margolis said that she and Shymanksy are not typical GUSA candidates.

“Neither of us have ever run for senate, we’re both in the executive,” Margolis said. “It’s definitely a different perspective just as students who don’t come from GUSA have.”

McNaughton and Simons are a mixed ticket in terms of their affiliations with GUSA.

McNaughton has been a GUSA senator since her sophomore year and currently serves as senate vice speaker. She is also a member of the Finance and Appropriations Committee and a student representative on the board of directors. In the past, she served as the vice chair of the Georgetown University College Republicans (full disclosure: McNaughton is a former staff writer with The Hoya).

Simons helped found and served as president of the Georgetown Speechwriting Advisory Group, GU Golf Club and the U.S.-Middle East Youth Network. He also led last year’s Students Against Restrictive Housing Policy social media campaign, in addition to co-leading this year’s, and worked with the administration to push the implementation of the policy back one year.

Simons said his ticket’s mix of GUSA and non-GUSA experience is ultimately an asset.

“Coming from this outside perspective, it helps me analyze GUSA more objectively,” Simons said. “However, the disadvantages are that you don’t have the personal relationships with administrators. I don’t have the relationships that Abbey does, which is why I think we’re a great team.”

Rosenberger and Varghese are another pair hoping to capitalize on their shared GUSA experiences.
Rosenberger, who is a former GUSA senator, currently serves as policy chair of the Honor Council and philanthropy chair for the 1634 Society and was a former two-time columnist for The Hoya.

Varghese said that he and Rosenberger make for a potent combination.

“I think that it really just shows people that not only can we work within GUSA, we know the administrators,” Varghese said. “We know how things operate at basically every level of the university.”
Wadibia and Cheney combine non-GUSA and GUSA backgrounds as well.

Wadibia is a member of the Lecture Fund and was a speaker at Georgetown’s TedX last semester. He is also a residential assistant and a former community member of The Hoya’s editorial board.
Cheney, who transferred to Georgetown as a sophomore from Villanova after two years, is a GUSA senator and works in the Office of Sustainability. She has previously served on the Finance and Appropriations Committee, and is also a member of the Lecture Fund and the Global Social Enterprise Initiative.

Cheney said that integrating her experiences in GUSA with Wadibia’s experiences elsewhere is one of their biggest assets.

“You don’t have to have GUSA experience in order to be the voice of the student body,” Cheney said. “I believe that you can be a stronger representative of our peers if we have that balance … we’re uniting this campus with the breadth of experience we have.”
Both members of the Minahan-Paduano campaign are both unaffiliated with GUSA, but declined to comment on this particular topic.

“I don’t think there is one formula for success, whether that be two people involved in GUSA or one person who isn’t or both who are,” Tezel said. “I think coming at it with the perspective of being in the GUSA executive I was able to see how the cabinet works, how the staff works, how the communications are and how GUSA operates.”