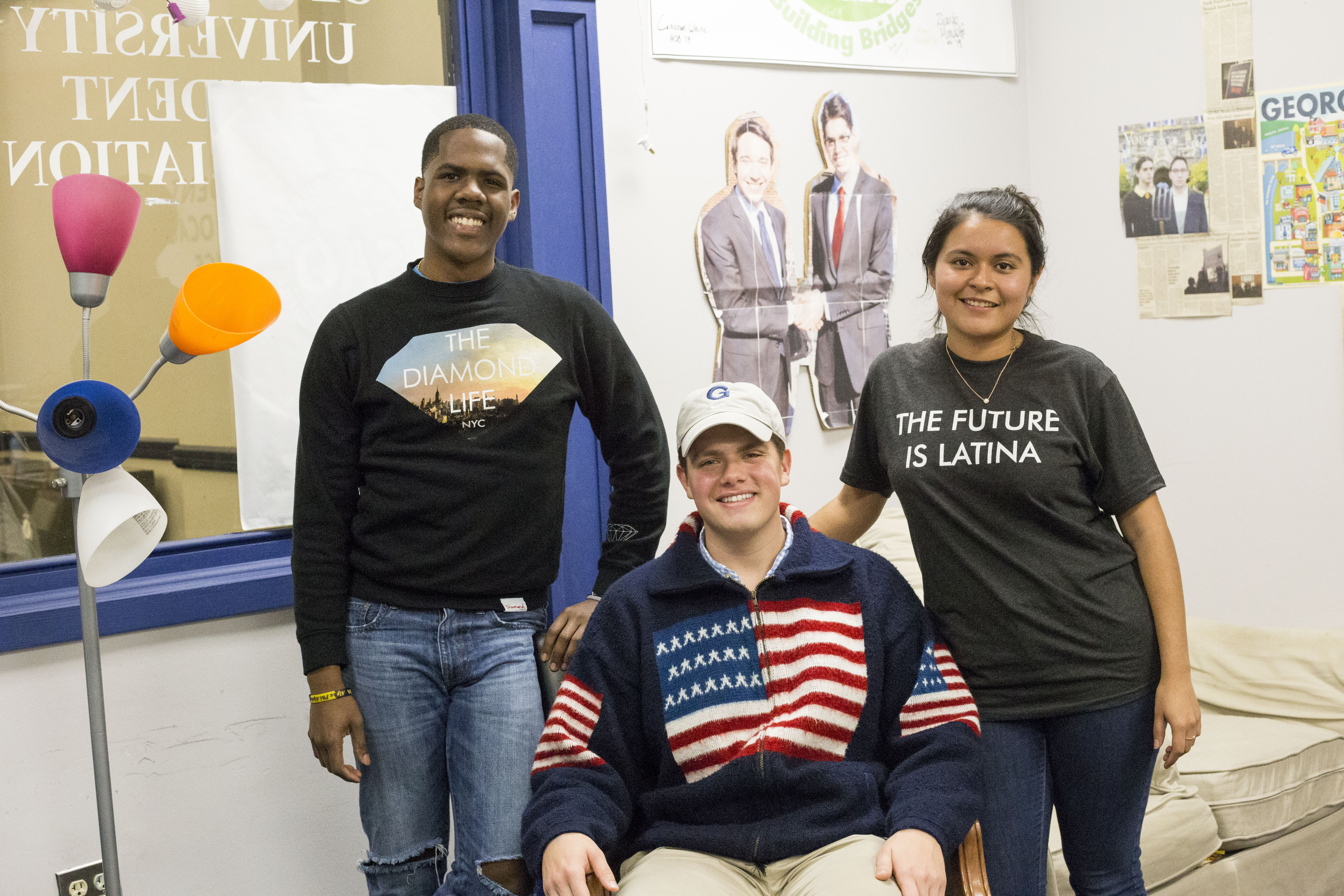 Since then, Mack and Andino have engaged Georgetown’s administration to address concerns over the status of students without documentation and “hidden costs” that make Georgetown campus life less affordable.

They have also had to react to external events, including early tensions with the GUSA senate, free speech challenges among student groups and anti-Semitic vandalism in various residence halls in September and October.

In an interview with The Hoya, Mack and Andino discussed their successes and shortcomings in achieving campaign promises, giving themselves a B+ grade so far. Despite progress on specific projects, Mack and Andino acknowledged the long-term nature of their campaign goals.

During their campaign, Mack and Andino made affordability a central issue, calling it “the most pressing issue affecting Georgetown students” in a February pre-election viewpoint.

Mack and Andino promised to push the administration to adopt “more cost-saving measures” in the budget and to facilitate “Georgetown-specific discounts” with neighborhood businesses including Safeway and Trader Joe’s.

The second proposal has been implemented in a modified program launched in August as Mack and Andino’s first affordability initiative. The project distributed 1,500 coupon cards offering discounts at local businesses to students, particularly to those from low-income families.

The cards offered modest discounts at 21 clothing stores, restaurants and entertainment options, not grocery stores as Mack and Andino originally planned. Moreover, most of the markdowns offered no more than 15 percent off original prices — and some were already available with a student ID.

Missy Foy, director of the Georgetown Scholarship Program, a university program to support low-income students on Georgetown’s campus, said the discounts on the card were meager and largely applied to nonessential luxuries.

“While we’re appreciative of any discount offered to students (and certainly students for whom finances are a significant stress should be front of line), our candid reaction is that local companies could and should do more,” Foy wrote in an August email to The Hoya.

Mack and Andino stood by the initiative, though Mack acknowledged that the project could have been more successful with more outside input.

“The lesson I learned from it is that engagement is key,” Mack said. “When students feel left out of the loop, they aren’t as good and aren’t as well-received. I don’t regret it, I just think we could’ve done a better job.”

As their second major affordability effort, Mack and Andino proposed a program through the Cawley Career Education Center that would give students stipends for working unpaid internships. They secured $15,000 in funding for a 10-person pilot program for spring 2018, according to Aaron Bennett (COL ’19), the press secretary for the GUSA executive.

Mack cited the GUSA executive’s involvement in the expansion of Saturday GUTS bus service to Dupont Circle and the Trader Joe’s grocery store in Foggy Bottom. The change expanded free weekend transportation options from the main campus to popular locations by reallocating funding from a late-night bus service to Adams Morgan.

Discussing the prospect of securing funding and organization for a food pantry for students who stay on campus during holiday breaks when O’Donovan Hall is closed, Mack expressed restraint.

“It’s a project that transcends our administration,” Mack said. “It’s an important topic.”

Entrepreneurship has been a guiding theme for Mack, who has taken the topic up as a personal project.

Mack cited as one of his proudest accomplishments the growth of organizations centered on supporting student startups, such as the Yellow House, a townhouse located at 1239 37th St. NW that hosts training and mentorship programs sponsored by the university’s Georgetown Entrepreneurship Initiative. Mack similarly pointed to the student group Georgetown Ventures, which connects undergraduates entrepreneurs with funding and consulting services, and individual startups.

“GUSA involvement in the Yellow House wasn’t direct. GUSA didn’t necessarily say, ‘Hey, we need the Yellow House,’” Mack said. “But GUSA’s role is just that the conversation of entrepreneurship is on the Provost’s mind so that when he sees a proposal for a Yellow House, they choose that over other uses of that space.”

“It’s hard to say it’s going to be accomplished by the end of our term because these are the long-term projects,” Andino said.

Mack emphasized the role the executive plays in bringing the needs of students to the attention of university administrators.

“Jessica and I meet with administrators all the time, but we recognize that there are a lot of students at Georgetown who have never and will never meet with an administrator,” Mack said.

On the mental health front, Bennett pointed to the work led by Kenna Chick (SFS ’20), GUSA mental health policy coalition chair, in pushing for the university to subsidize a pilot program for off-campus mental health care, while Mack spoke approvingly of the expansion of mental health dialogue on campus.

Mack and Andino also indicated support for further sexual assault prevention policies at the academic and student activities levels, including a push to finalize a department of women and gender studies and bystander training for all new students.

Andino said petitioning directly to the university involved a learning curve, but that administrators are frequently receptive to the executive’s ideas.

“At first it’s always hard to navigate all the different names of administrators, and you realize how many offices exist at this campus. But I feel like a lot of the times in our initial meetings, administrators would be like, ‘We are here to help you,’” Andino said.

“I have really enjoyed working with Kamar and Jessica, and have great respect for their leadership, and their focus on listening to and representing student voices,” Olson wrote in an email to The Hoya.

Mack highlighted the pair’s involvement in discussions on campus construction and planning, including working with Vice President of Planning and Facilities Management Robin Morey to ensure morning quiet hours by pushing back the daily start times for planned construction at Medstar Georgetown University Hospital.

Morey spoke favorably about his collaborations with Mack.

“He and his GUSA team have been great partners and have helped us advance our work in improving the Georgetown University community,” Morey wrote in an email to The Hoya.

The executive also successfully advocated for the repeal of a no-warning policy for noise violations in freshman dorms. Freshmen are now offered a single warning before they are written up for noise violations, a return to a policy discontinued in 2016. The policy provides freshmen “with a more forgiving policy as they transition into college life,” Bennett wrote in an email to The Hoya.

Ben Baldwin (SFS ’19), the speaker of the GUSA senate, said Mack and Andino have brought an untraditional vision of GUSA advocacy.

“In our interactions and work with the executive, we certainly think they have a brought a new perspective to GUSA that had not existed in recent administrations,” Baldwin wrote in an email to The Hoya. “I hope moving forward we will see greater cooperation between the executive and the Senate, and I know that our newer Senators look forward to working more closely with the policy coalition chairs.”

Reflecting on his term so far, Mack said he would have to take time to consider running for a second term.

“I need to call my mom about it. One thing I will say is I want to see someone in the role who has a background and who is doing it for the right reasons. If you are doing it as a joke, I don’t think that’s appropriate,” Mack said. “That’s what I really care about, is making sure that GUSA is in good hands next year.”