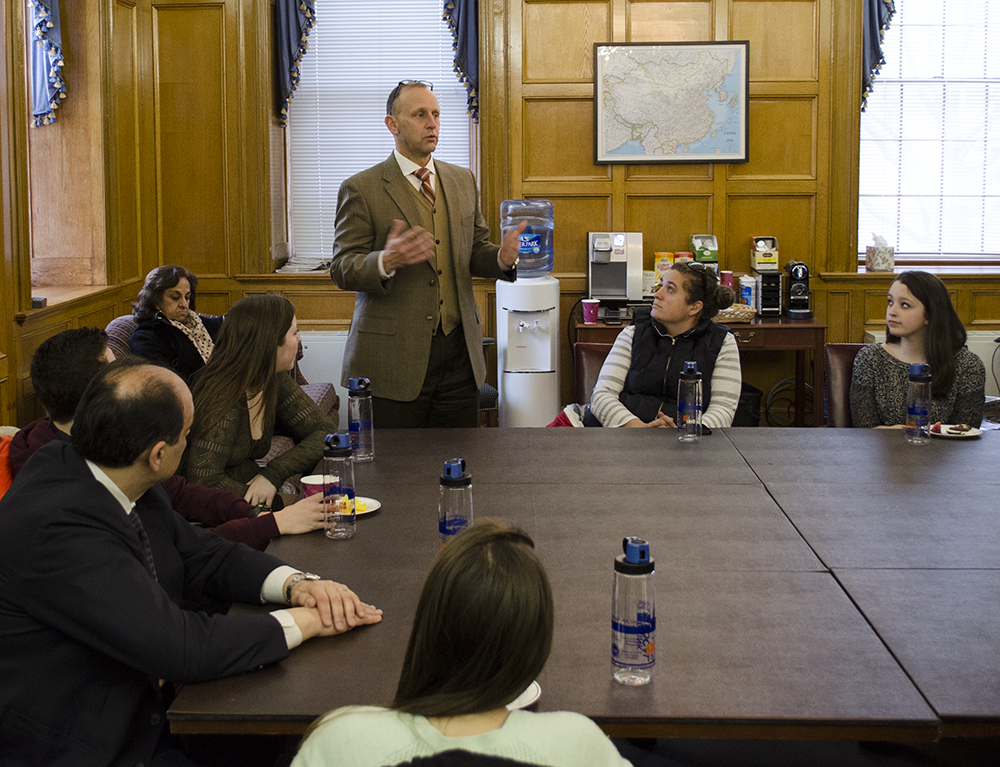 The Switch It Off Challenge, a five-week-long competition between the four freshman dorms to increase sustainability efforts, announced Harbin Hall as its winner on Thursday at an award ceremony in Gervase Hall.

The Office of Sustainability, which organized the challenge, measured energy usage on a kilowatt meter and compared the results to the amount of energy used in each dorm last year in order to calculate energy savings. Student engagement was measured by the number of students from each dorm who signed a sustainability pledge to commit themselves to reducing their energy usage.

Two student representatives from Harbin Hall will be awarded two iPads with solar chargers in recognition of their efforts. eleven percent of students in Darnalll Hall made the energy pledge, putting the dorm in second place. One random student from Darnall will be awarded an iPad Mini.

Office of Sustainability Director Audrey Stewart, who measured and charted weekly savings, said that sustainability is a core value at Georgetown.

“Sustainability and conservation at Georgetown are a natural extension of the university’s mission, our Jesuit heritage and our value on justice and the common good, reflecting the Catholic and Jesuit concept of care for creation,” Stewart said.

“I signed the Switch It Off pledge, and what I loved most about it is that you could tailor the experience to something you felt you could hold yourself responsible to,” Shain said.

The pledge listed small acts that contribute to energy saving, with students checking off which conservation efforts they pledged to take part in throughout the competition.

“It was cool because you could kind of pick and choose the things that you could commit to, like turning off the lights when you leave the room, turning off the water when you brush your teeth and taking shorter showers,” Forger said.

Stewart noted that Georgetown would greatly benefit from increased sustainability efforts. If all campus dorms saved as much energy as Harbin did and had as much participation, there would be over 1,000 students on campus taking a pledge to save energy. The university would save over a million kilowatt hours of electricity within one academic year, which would save Georgetown over $100,000 in energy costs.

“What you guys did by coming together shows that these small, everyday actions, such as turning the lights off or taking the stairs may seem like little things, but if we are doing them collectively and habitually, it can really add up to a big impact, and it plays a big role in our overall sustainability goals,” Stewart said.

At the awards ceremony, Vice President of Planning and Facilities Management Robin Morey said that the competition was an easy way to get students thinking about energy conservation.

“We were looking for low-cost, no-cost ways to reduce our cost, be more sustainable, reduce our energy consumption, and this is one of those,” Morey said. “So things such as turning off lights … these things are important. We thought this was a fun way to do it [and] get students engaged.”

Morey also said that while the university is dedicating itself to decreasing energy consumption on the demand side, they are also working to supply more sustainable energy.

“We are working hard to purchase power agreements that will bring us green power instead of power that’s generated by petroleum and fossil fuels,” Morey said. “We are also looking at the efficiency of all of our campus operations.”

University Senior Vice President and Chief Operating Officer Chris Augostini announced his plans to discuss conservation efforts in two different staff forums, one for day staff and one for overnight workers, during every quarter.

“We hope to extend this conversation to our employees to see if we can get them more involved,” Augostini said.

While the competition is over, there remain other ways to stay involved in Georgetown’s sustainability movement.

“There are many ways that students can plug in to sustainability initiatives on campus — from getting involved with a student group, to exploring sustainability and the environment in the classroom, to alternative spring break trips and more,” Stewart said. “Our website offers a number of resources where students can discover more ways to get involved.”

Students who took part in the challenge reflected on the importance of conserving energy throughout the competition.

“To me, energy conservation is important not only to help the environment, but to save money that can be used for other important things on campus,” Harbin resident Jennifer Henry (NHS ’18) said.