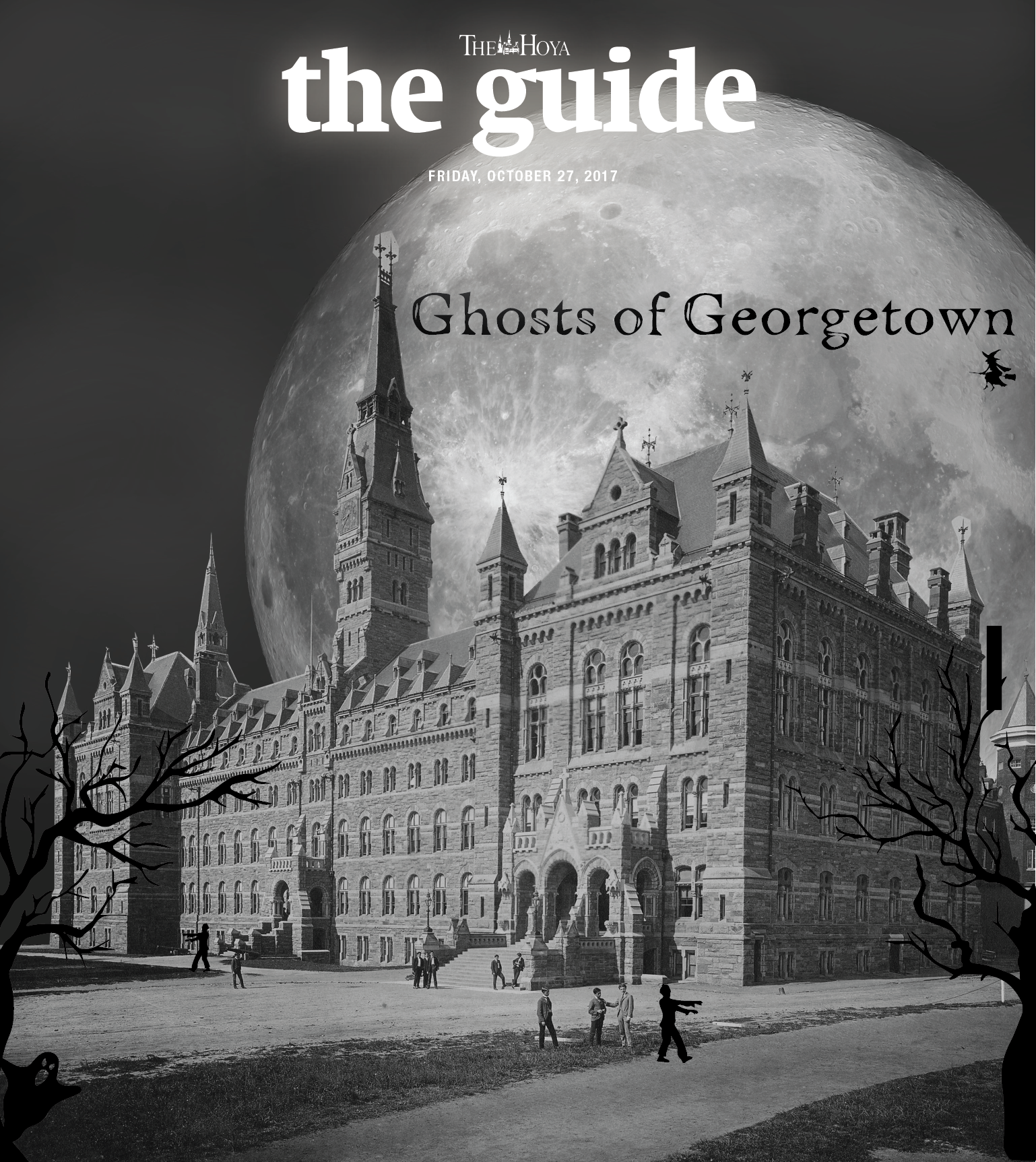 A little drummer boy, a possessed girl and a Confederate spy: What do these figures have in common? They are all specters whose haunted stories are ingrained in some of Georgetown’s most iconic locales.
Students have often passed “The Exorcist Steps” while going on runs, attended a class in Healy Hall or stumbled upon the Oak Hill Cemetery while wandering the city’s streets. Yet, few are aware of the supernatural stories behind these locations.

Ghosts have been said to haunt Georgetown for centuries, as tales of ghosts and magic have existed since the Province of Maryland sanctioned the creation of Georgetown in 1751. In fact, there have been several reports of haunted happenings on campus.

Haunting the Hilltop
Many students have recognized that the elevators in Healy Hall only go to the fourth floor, even though there are clearly five floors visible from the building’s exterior. Legend states that a young student found a mysterious book in the library and took it to his room where he began to recite its Latin contents orally.

Former Washington, D.C. tour guide and author Tim Krepp writes in his book, “Ghosts of Georgetown,” that the student “inadvertently opened a door to another realm. Ever since, unable to close the door, the university has sealed off the fifth floor.”

Krepp’s research has uncovered stories of other locations familiar to Georgetown students.
For example, the spiritualist Mary Steele Morris once lived at 3400 Prospect St., a street now cherished by students for Einstein Bros. Bagels at the Car Bar and The Georgetown Chimes’ house.
Morris would frequently host seances in her home, and they were often followed by strange occurrences in the house, such as people hearing tapping noises or finding broken artifacts. When she died, her nephew moved into the home and soon after began hearing the footsteps of an older woman.

“He was pretty convinced that his aunt never really left,” said Andrew Rawls, owner and founder of Fiat Luxe Tours, a D.C. service that offers special neighborhood tours including “Haunted and Historic Georgetown.” “He was also quoted and he said, ‘This was her home for many years, she has my permission to make her return any time she pleases.’’’

Another notorious location familiar to students is “The Exorcist Steps,” which are also found on Prospect Street. Though the 1973 horror film “The Exorcist” put the steps on the map, they have always been a touchstone for Georgetown students. Inspiration for the horror classic came from the novel’s author William Blatty’s (C ’50) experiences as a Georgetown student. While attending the university, Blatty heard about a young boy who had been exorcised in Maryland and brought to Georgetown for treatment; from there, Blatty penned the famous novel and another mysterious location was added to Georgetown’s long list.

In his book, Krepp also introduces the diverse array of ghosts rumored to live on in the neighborhood.

One of his accounts takes readers back to a hot, dry day during the War of 1812. While the British continued to press forward toward the capital city, exhausted and dispirited American soldiers made their way across the Potomac River, hoping to separate themselves from the descending enemy.
As they marched, the sounds of a little boy’s drum permeated the air, motivating the militants to keep pushing forward. Although that little drummer boy lost his life in a terrible storm, rumor has it that on stormy nights, he can be heard over the sounds of Little Falls, his drumbeats signifying misfortune for those unlucky enough to bear witness to them.

Another haunted destination just a few blocks from campus is Oak Hill Cemetery, the final resting place for some of Georgetown’s cave dwellers – long-term residents of the community. Though somewhat hidden from the public, the site is the subject of a number of urban legends.

Rawls described the bitter life of a Confederate sympathizer named Antonia Ford Willard, now buried in Oak Hill Cemetery. Willard was a spy for the Confederacy who used her charm to obtain Union secrets.
Willard was later captured and confined at Old Capitol Prison where, in a twisted turn of events, she fell in love with her arresting officer, Joseph Willard.

According to Rawls, when Willard was asked how she could succumb to marrying a Yankee, Willard eerily replied, “I knew I could not revenge myself on the nation, but I was fully capable of tormenting one Yankee to death, so I took the Major.”

Urban Legends Live On
Krepp retold another eerie story that unfolded in the picturesque Oak Hill Cemetery.
In 1872, as D.C. began to expand into a more bustling city, various human remains were moved to the secluded Oak Hill Cemetery.

The remains of John Peter Van Ness, a New York politician and the 10th mayor of D.C., as well as those of his family, were among that group. The hearse carrying the remains was pulled by six white horses, but after the procession, while the horses were feeding, one passerby remarked that the horses appeared to have no heads.

Since then, many people have claimed over the years to have seen the six headless horses making the procession from the old Van Ness mansion, now the site of the Organization of American States, to Oak Hill Cemetery.

Both Krepp and Rawls obtained their information primarily through public domains, such as old newspapers and online databases. Krepp relied on the wealth of material available through the Library of Congress, while Rawls amassed his own archive in his home.
“I have a miniature library about D.C. in my house, so lots of books. There are a lot of great ghost story books,” Rawls said.

Ghost stories can help us uncover the city’s rich history and understand the neighborhood from a new perspective. When we talk about ghost stories, we discover things we would never learn in history class.
“Ghost stories allow us to be entertained but also learn,” Rawls said. “Even the scandals of Georgetown help humanize this neighborhood, showing that it wasn’t always the snooty place that it has a reputation to be today.”

As to whether you should genuinely feel frightened by these eerie stories, Krepp and Rawls agree that while you can still feel the presence of the people who used to live here, there is nothing to be afraid of.
“The present is much more of a danger to us than the past,” Krepp said. As we pass through the neighborhood, we can gain insights into the eerie stories of the past, but rest assured that we need not fear the supernatural.