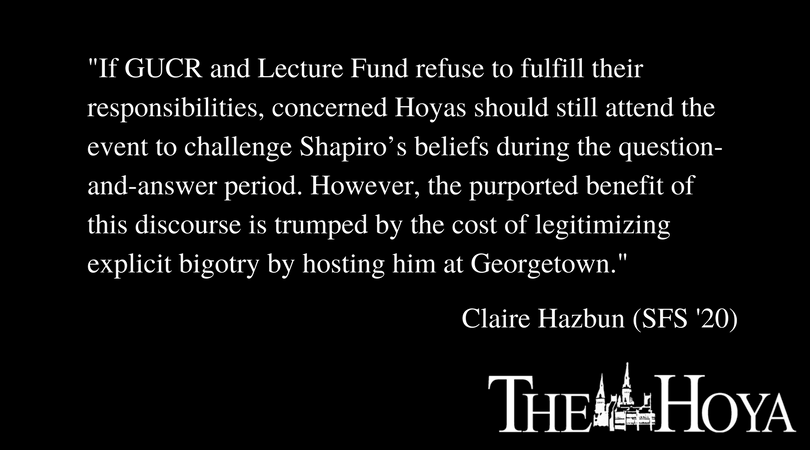 Ben Shapiro, a prominent conservative author and speaker who is set to speak on Georgetown University’s campus next month, is openly racist, Islamophobic and transphobic. Bringing Shapiro, a former editor-at-large of Breitbart News, to Georgetown only normalizes such hate.

GUCR and Lecture Fund should revoke their sponsorship of Shapiro’s speech. By endorsing the event, members who remain on these organizations’ boards are complicit in legitimizing Shapiro’s hateful speech.

Shapiro is not shy about his views — his targeting of minorities and the LGBTQ community is integral to his brand.

In 2010, he tweeted, “Israelis like to build. Arabs like to bomb crap and live in open sewage. This is not a difficult issue. #settlementsrock.”

In a 2015 interview, Shapiro refused to address a transgender woman by her preferred pronouns, claiming her identification as a woman “is a lie.” Shapiro often professes his belief that to be transgender is to suffer from a mental disorder.

In 2016, Shapiro promoted on Facebook an article published on his website, The Daily Wire, which covered German authorities’ distribution of flyers instructing migrants not to grope people. The article called the Muslim migrant presence in Europe a “disease.” Shapiro has a history of malice toward Muslims. In a 2014 video, he claimed, “We’re above 800 million Muslims radicalized, more than half the Muslims on Earth. That’s not a minority. That’s now a majority.” Politifact found these numbers to be “practically meaningless.”

In a 2018 interview, he discussed his reasoning for removing a Columbus Day video that was racist to indigenous people from his website, after leaving the video on his site overnight. During the interview, he asserted his belief that “Native American culture was inferior to Western culture.”

Shapiro’s views, shamelessly presented and widely publicized, are not merely controversial. His racist, Islamophobic and transphobic remarks reflect bigoted ideas that we as Hoyas should universally condemn.

We must not think of this event as an issue of increasing accessibility to diverse viewpoints, as proponents of similar events often contend. Shapiro’s views are widely available on the internet — he runs his own website, hosts a daily talk show, posts his speeches on YouTube and is active on social media.

Furthermore, GUCR and Lecture Fund could invite other conservative speakers to discuss issues Shapiro typically covers in his university lectures — without the explicit hate he so proudly preaches. For example, last month, GUCR brought Sen. Jeff Flake (R-Ariz.) to speak on campus. GUCR and Lecture Fund could use their resources to invite another reasonable, non-bigoted conservative, such as New York Times columnist David Brooks. Inviting these figures allows for discussions on conservative perspectives without legitimizing bigotry.

The harm of inviting Shapiro to campus is clear. Over time, we become apathetic to bigoted rhetoric. This hateful speech creates a foundation for violence against marginalized groups. After all, oppressive attitudes, actions and policies do not occur in a vacuum; aggressors see a culture of apathy as an invitation to act.

Writing in the Journal of Law and the Biosciences, psychologists Gail Murrow and Richard Murrow found that dehumanizing rhetoric against groups of people diminishes the ability of both listeners and speakers to empathize with these groups, making violence against them feel more tolerable. Shapiro’s vile rhetoric only contributes to the dehumanization and endangerment of Palestinian Arabs, Muslims, Native Americans and LGBTQ individuals.

Critics may cry in response, “millennial snowflakes!” Yet my argument is not made on the basis of shielding young people from harmful language. In fact, students should educate themselves on Shapiro’s beliefs and discuss them with their peers. However, we can certainly make a distinction between coddling students and creating a platform for bigotry.

Critics may cry, “but free speech!” Yet I do not call for university intervention. This issue is not an issue of free speech, but of voluntary endorsement. Campus organizations certainly have the right to invite Shapiro — but they also have the moral responsibility not to do so.

If GUCR and Lecture Fund refuse to fulfill their responsibilities, concerned Hoyas should still attend the event to challenge Shapiro’s beliefs during the question–and–answer period. However, the purported benefit of this discourse is trumped by the cost of legitimizing explicit bigotry by hosting him at Georgetown.

Shapiro should not have been invited in the first place, but it is not too late for GUCR and Lecture Fund to do the right thing: Deny hate a platform to speak.

Claire Hazbun is a sophomore in the School of Foreign Service.