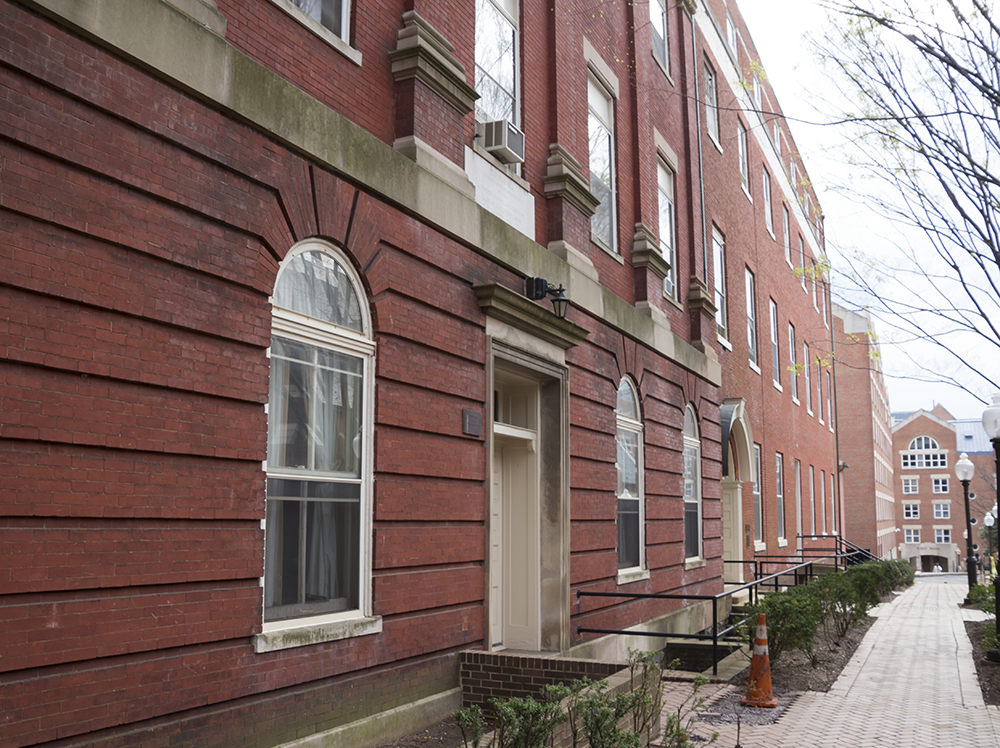 University President John J. DeGioia and the board of directors approved the Working Group on Slavery, Memory and Reconciliation’s recommendation to rename Mulledy Hall and McSherry Hall on Saturday, one day after student activists began their sit-in outside the Office of the President.

The group changed the names of both Mulledy Hall and McSherry Hall to the interim names of Freedom Hall and Remembrance Hall, respectively.

The retention of the name of Mulledy Hall sparked controversy earlier this semester, calling attention to the actions of Fr. Thomas Mulledy, S.J., who authorized the sale of 272 slaves to a Louisiana plantation in 1838 while serving as the Maryland provincial of Jesuits; Mulledy would later serve as university president. McSherry Hall is named after then-University President Fr. William McSherry, S.J., who served as Mulledy’s lawyer during the sale.

“We are grateful to the Working Group on Slavery, Memory and Reconciliation; to students, including the Black Leadership Forum and other student groups on campus; and to other members of our community for their thoughtful engagement in these important, and sometimes challenging conversations,” DeGioia wrote in a statement to The Hoya.

According to a letter attached to a university-wide email sent at 5 p.m. on Saturday, DeGioia met with several student activists Friday morning outside his office, then received a recommendation from the working group to change the names of the two halls. The university’s board of directors approved the recommendation electronically on the same day.

“As a university, we are a place where conversations are convened and dialogue is encouraged, even on topics that may be difficult,” DeGioia wrote in a university-wide email. “This is what we will continue to do at Georgetown. We are supportive of our students and proud of the depth of their engagement in these urgent conversations.”

Student activists began staged a sit-in outside the president’s office from 9 a.m. to midnight Friday. The activists intended to continue staging daily sit-ins until the administration met their demands, but they temporarily halted the sit-ins Monday in light of the name change. The group has not announced further plans, but encouraged activists to “not lose momentum” on the Facebook event page of the demonstration.

Latazia Carter (COL ’17), who attended the sit-in, emphasized that student activists were acting in response to a lack of recognition and responsiveness by the Georgetown administration.

“I don’t want this to seem like a new movement, because it’s not,” Carter said. “But we’ve had to take this action because the university fails to hear us and recognize our thoughts on the matter.”

BLF member Crystal Walker (SFS ’16), who is a member of the working group, said that she is pleased by DeGioia’s decision to approve the name change.

“I am content with the provisional names of the two buildings and look forward to the final name change, as it will directly commemorate the lives of the 272 enslaved people who were sold,” Walker wrote in an email to The Hoya.

This activism comes in response to recent allegations of racial injustice on college campuses worldwide.

These accusations resulted in the resignation of University of Missouri President Tim Wolfe after he was criticized for failing to address issues of racial intolerance and outrage at Yale University over comments on offensive Halloween costumes and racial insensitivity by university faculty. As a show of solidarity, around 250 students, faculty and community members attended a demonstration hosted by black student activists in Red Square on Thursday.

At the event, members of the BLF announced demands, including revising university tours to include information on the history of campus sites, placing plaques on the known unmarked graves of slaves, establishing an annual program focused on education, creating an endowment for recruiting black professors equivalent to the net present value of the profit from the 1838 sale and mandatory training for professors on diversity and identity issues.

In September, DeGioia charged a working group of 16 students, faculty and alumni to address the history and ramifications of Jesuit slaveholding at Georgetown. The group is chaired by history professor Rev. David Collins, S.J.

After the board approved the working group’s recommendation, Collins said he would have rather kept to the original schedule for the name change instead of responding quickly to last week’s demonstrations. “I wish we could have kept to our timeline … to vote on a resolution after we had had a university-wide conversation,” Collins wrote in an email to The Hoya. “There are multiple stakeholders in our university. As my email inbox shows, a lot of them wish that we had had time to involve them in a larger conversation.”

However, Collins said he recognized the importance of incorporating the views of the entire Georgetown community and accoutning for the risk of community members feeling uninformed when contemplating the name change.

“We made the decision very clearly that the situation … is a signal to us that it’s important for us to pass this resolution today and to risk all the complications that this is going to cause with other segments of the community that aren’t as familiar with why this is so important,” Collins said. “The BLF and the student groups made a compelling case … that we need to pass the resolution now rather than several months from now.”

The Georgetown department of philosophy also published a letter in support of the Black Leadership Forum’s protests Friday, urging the halls’ name changes, the memorialization of the graves of slaves on campus and an annual educational program on Georgetown’s slaveholding past.

In its recommendation to DeGioia, the working group said it found its values to be consistent with those of black student activists.

“We are very encouraged by and welcome the suggestions of the Black Leadership Forum and other students,” the group wrote. “Their words are shaped by a thoughtfulness, a passion and a spirit of constructive engagement that we appreciate deeply and hope will sustain us through the course of this important and painful conversation about our history and its legacy.”

The group said they proposed the names “Freedom Hall” and “Remembrance Hall” to memorialize the experiences of slaves who helped to build the two buildings in the early 19th century.
In the letter, the group also announced three events to continue dialogue on campus, including a symposium on the history of slaveholding at Georgetown on April 16, a holiday recognized by the District of Columbia as Emancipation Day.

The group will also host two conversation circles next Wednesday and Thursday and a teach-in Dec. 1. Both will take place in the Healey Family Student Center. The teach-in will involve an academic discussion not limited to a certain viewpoint or frame of topic on the issue of Georgetown’s slaveholding past.

According to Office of the President Chief of Staff Joe Ferrara, the working group plans to engage in dialogue with the Georgetown community to find permanent names for Freedom and Remembrance Halls.

“The Working Group will continue to engage our community in dialogue. Through this process of dialogue, the intended timeline is to identify recommended permanent names sometime during the spring semester,” Ferrara wrote in an email to The Hoya.

Collins emphasized the importance of getting as close to a unanimous consensus as possible from different stakeholders in the community, such as alumni and faculty, when suggesting permanent names for the halls.

“Some stakeholders are harder to get onboard than others,” Collins said. “We want everybody to be onboard. You never get unanimity. The working group is prepared to deal with the lack of unanimity.”

Collins said that while some community members have contacted the group in disagreement with the name change, he has not received any racially charged rhetoric.

“I have gotten no email that’s racist,” Collins said. “I have gotten a lot of emails between accusing us of working too hastily [and] for not listening to all the folks who are out there.”

The movement to change the names of both halls sparked the creation of a working group at the College of the Holy Cross, where Mulledy served as its first university president starting in 1843 after leaving Georgetown and where a residence hall is named in his honor. In a letter to the university community, College of the Holy Cross University President Rev. Philip L. Boroughs, S.J., outlined the need to examine Holy Cross in a similar way as Georgetown.

“Since the fall, I have been following the progress of Georgetown’s working group, and have been in conversations with some of our alumni, faculty, and staff about these same issues,” Boroughs wrote. “While our historical situation differs somewhat from that of Georgetown, I believe we too must investigate what this issue means for us today.”
According to Connor Maytnier (COL ’17), who serves on the working group, the temporary renaming to Freedom and Remembrance Halls is the first step in a long process to address the history of slaveholding at Georgetown.
“While the renaming of the buildings is by no means an insignificant step, it is just one piece of a more in-depth process,” Maytnier wrote in an email to The Hoya. “I hope that we can continue to engage with folks across our community and promote dialogue on a number of fronts … such as how to best acknowledge Georgetown’s history with slavery, and steps that can be taken to memorialize and reconcile that history.”
Collins said student input in the naming process is essential to formulating representative permanent names for Freedom and Remembrance Halls.

“The creativity of coming up with a new name — that’s your responsibility. … How about if groups were to get together and engage in some kind of [project] … and out of that were to emerge a word, a name, a concept on how to name the building?” Collins said. “Georgetown students are some of the smartest students in America, and some of the most creative. … What ideas are you going to come up with?’”

Correction: A previous version of this article wrongly identified a picture of Ryan Hall as Freedom Hall (previously Mulledy Hall). The image has now been updated to a correct photo of Freedom Hall.