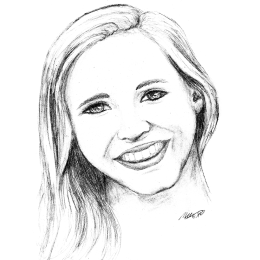 A few days ago, one of my friends posited that we are born with our sex but not our gender. It was a very simple, straightforward statement — but it caused me to do some serious reflection. Why does our society and everyone in it work so hard to make clear distinctions between masculinity and femininity?
The concept of gender has been hundreds if not thousands of years in the making. We have come to accept a certain set of values, traits, appearances and interests that constitute the male and female genders. As we grow, we are increasingly expected to fit into these categories, lest we be saddled with cruel and unforgiving stereotypes or labels. But here we are in the 21st century, nearly a hundred years after women won the right to vote in U.S. elections, and society is still battling to maintain the gender status quo. Despite conversations of feminism that permeate the government, music and business industries, it seems that gender norms have remained stagnant.

To illustrate my point, I will start with an example. As kids, girls can experiment with their dress — some of us went through a tomboy phase, during which we donned oversized basketball jerseys and shorts and rocked Converse high tops. We went out to recess and proceeded to school many of our male friends in sports ranging from tetherball to soccer.

Sometimes our parents had to steer us toward more feminine attire, but by the time middle school came around, the fad of dressing like a boy seemed like it had worn off. We started carrying ourselves differently, we invested in fashion accessories and we spoke in demure tones. We began to mold ourselves to fit the expectations of femininity, narrowing our interests and opinions to blend in. The same was true of our male counterparts; as they grew and matured, they became boxed into being more masculine. People who defied this process were seen as anomalies and were shamed or worshipped on a case-by-case basis.

The boy who played both violin and football? He was both sexy and a catch.

The guy who liked theater and connected more openly with his feelings? He was probably gay.

These types of crossovers between the masculine and the feminine manifested differently for different people, either shooting stereotypes to bits or simply enhancing them.

Today, feminism is highlighted in both national and international news. Female politicians, business leaders, fashionistas and even the legendary Beyoncé Knowles have labeled themselves as feminists. But it’s not enough.

I look at Beyoncé, and I am impressed by her tongue-in-cheek sensibilities. She advocates for women’s rights and equality while maintaining her status as a sex symbol and icon. While she appeals to female activists, I am dubious that she would relinquish her femininity and sexual power too quickly in a fight for gender equality.

In the end, to really achieve equality between men and women, society needs to rise above the binding concepts of what it means to be male and what it means to be female. People should be allowed to dabble in whatever they so choose: music, art, sports, education, dress and sexual identity. Until the notions of masculinity and femininity supported by the media, by our parents, by our friends and by even ourselves start to subside, gender equality remains an impossibility, plain and simple.

Allie Heymann is a sophomore in the School of Foreign Service. THROUGH THE GLASS CEILING