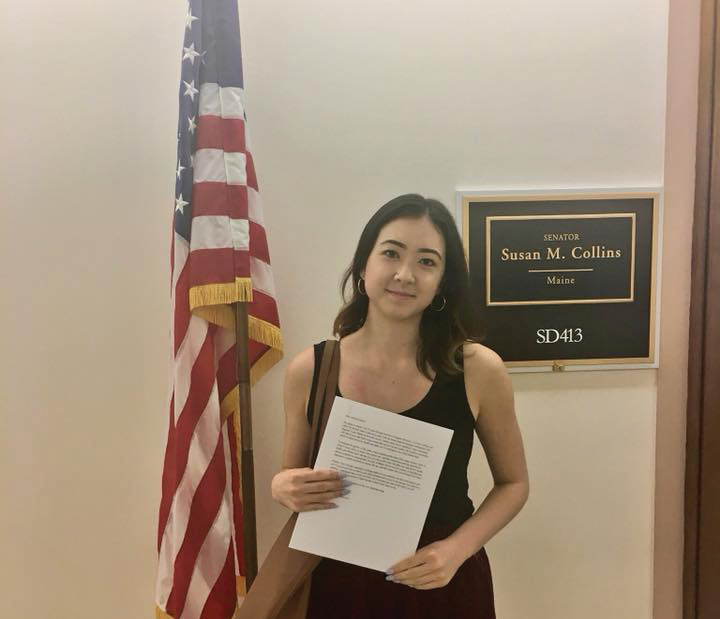 Brett Kavanaugh, United States Circuit Judge of the United States Court of Appeals for the District of Columbia Circuit, was nominated July 9 to fill the seat on the Supreme Court of the United States vacated by Justice Anthony Kennedy. Reproductive rights advocates have expressed concern that Kavanaugh will overturn Roe v. Wade, the decision which legalized abortion nationwide, based on his conservative reputation and President Donald Trump’s expressed desire to see the precedent overturned.

Maske began visiting the offices of Murkowski and Collins three times a week in July shortly after Kavanaugh was nominated. She said she feels a responsibility to speak out against the nomination.

“I’m president of a reproductive justice student organization, and I recognize just how much of a threat his confirmation to the Supreme Court would be, especially for young people all over the country,” Maske said. “I know that if I didn’t do everything I could about the issue, that I wouldn’t be able to forgive myself for it if the outcome is that he is confirmed.”

Her attempts have garnered public support from pro-abortion rights organizations NARAL Pro-Choice America and Planned Parenthood, and both organizations invited her to speak at their rallies. Maske has also been featured in news coverage by Spectrum News and Rewire.

Maske said she chose to appeal to Murkowski and Collins because their past voting records indicate they are the two senators most likely to vote against Kavanaugh’s confirmation. Maske, a Kentucky native, does not reside in either senator’s constituencies, but she said she did not believe her senators, Mitch McConnell and Rand Paul, would fight for reproductive rights.

“I’ve been visiting Senators Collins and Murkowski’s offices because it’s the best way I can find to make my voice heard about Kavanaugh’s nomination, since my own senators won’t stand up for my reproductive rights and health,” Maske said.

H*yas for Choice Vice President Kory Stuer (COL ’19), said that Maske’s advocacy serves to remind senators of the citizens who will be affected by Kavanaugh’s addition to the court and shifts the focus away from the politics of the nomination process.

“Angela and her work has spoken to a real need to correct the media narrative,” Stuer said. “So often, the media is focused on the political chess, and we aren’t looking at the people that will literally die if this man is confirmed to the Supreme Court. This is literally life or death, and that’s what Angela has been trying to uplift.”

HFC is used to battling against great obstacles to spread their message and support reproductive rights, Stuer said.

In addition to the support the group has garnered from other organizations, political student groups on campus have supported her right to free speech.

“Even though the Democratic platform is pro-choice and does support women’s bodily autonomy, because we are a funded student group on campus, we do have restrictions as to what kind of stances and what kind of actions we can do around reproductive justice, just because of Georgetown’s criteria,” Georgetown University College Democrats Chair Maria Cornell (SFS ’20) said. “It’s always really great to see H*yas for Choice able to be more vocal about those types of things.”

“Even though we do not agree with H*yas for Choice’s position in opposing Judge Brett Kavanaugh’s nomination, we support HFC in freely expressing their opinions and being active in this nominating process,” Lyons said in an interview with The Hoya.

The activism Maske has participated in has not always felt positive or productive, she said.

“I have learned that activism is, at times, exhausting and feels like you’re yelling into the void. I think that, especially when you’re doing things on a day-to-day basis, it can feel very frustrating, especially when you don’t feel like your voice is being heard,” Maske said. “I have seen that a lot of people don’t value the voices of young people.”

While Maske recognizes that all of her work from the last two months may not result in the outcome she desires, she said she feels thankful for the experiences of activism.

“Whatever the outcome is in this fight, I feel very privileged that I’ve had the opportunity to engage in this work,” Maske said. “Obviously not everyone does have the ability, and so even though it has been really a lot of work, I’m really happy that I’ve been able to work on this issue. Regardless of the outcome, I think I will look back on this and be glad that I did everything I could to make my voice heard.”