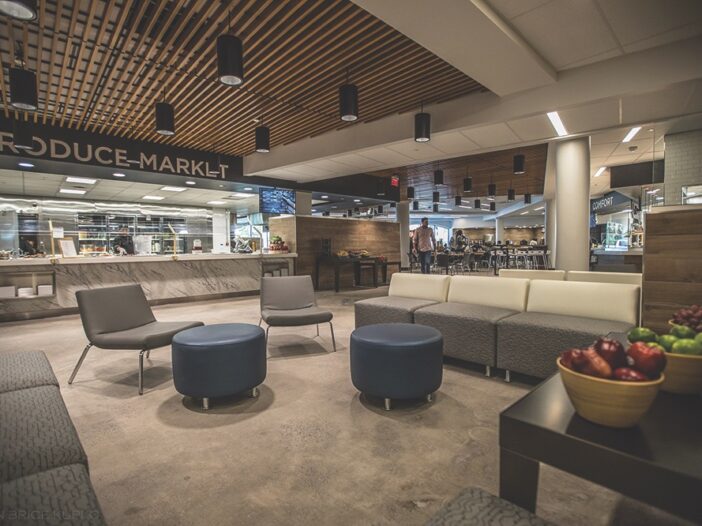 Leyla Hagan (SFS ’24) ordered the tofu teriyaki dish at 5Spice, a meal station in Leo J. O’Donovan Dining Hall, for dinner on Aug. 24. Later that night, she was in the emergency room because of a serious allergic reaction.

Hagan has a severe allergy to shrimp, and the wok — previously used to cook a shrimp dish — likely contaminated her meal.

“I ingested the shrimp oil, had a reaction, felt better, then got way worse, almost passed out on the floor of VCW, and had to go to the hospital,” Hagan wrote in an email to The Hoya.

This experience is indicative of broader issues that dining at Leo’s poses to students with dietary restrictions, according to Hagan, who met with an allergist Sept. 23 to acquire paperwork to exempt herself from the meal plan requirement.

But now that all juniors and seniors who live on campus are required to be on a meal plan, few are able to meet the standards for exemption, which has frustrated students who would prefer to cook for themselves. As the university returns to in-person operations, other issues also plague dining services, including suspected food contamination and a lack of sustainability.

In a June 24 email, Provost Robert Groves announced a change to the meal plan requirement for the 2021-22 academic year. The updated policy requires first-years and sophomores to select an all-access option and mandates that juniors and seniors in on-campus housing have a meal plan. In past years, juniors and seniors were not required to be on any meal plan, and sophomores could opt for a reduced option.

The decision to introduce the new meal plan requirement was made in the interest of student health, according to Groves.

“To support and promote a healthy living and learning community where all students thrive, we offer a number of nutritious, flexible and affordable meal plan options for students on campus,” Groves wrote in a June 24 email to the Georgetown community.

For Jack Dunn (COL ’23), the new requirement presents both an unnecessary financial burden and an inconvenience living in an apartment-style dorm with a kitchen.

“There is no logical reason to force students who have full kitchens in their apartments or townhouses to have a dining plan,” Dunn wrote in an email to The Hoya. “The University did not offer a cheap plan for students who had a kitchen.”

Representatives of the Georgetown University Student Association (GUSA) have suggested the university offer students the choice to opt out of the meal plan in exchange for a voucher of equal or near-equal value, according to GUSA Chief of Staff Thomas Leonard (COL ’22).

“That way students are given their freedom of choice to eat where they want to eat. They are given their availability of food options that are not precluded by whatever the university is offering at the time,” Leonard said in a phone interview with The Hoya.

The university’s response to GUSA’s suggestion has been lukewarm, according to Leonard, but GUSA plans to continue to meet with the administration officials to advocate for a response to this issue.

As students adjust to the new meal plan requirement, there have also been a number of health incidents related to food and dining on campus, especially for students with dietary restrictions.

Students with dietary restrictions have struggled to find adequate dining options in Leo’s, according to Isabel Janovsky (COL ’23). Janovsky, who is allergic to dairy and keeps kosher, said she felt dining options on campus were limited and that she needed to pursue an exemption.

“What I’ve been doing is buying my own food, which means I’m effectively paying double even though I’m not eating at Georgetown,” Janovsky said in a phone interview with The Hoya. “So while I am eating enough, it rubs me the wrong way.”

She has since been granted an exemption with the university and was refunded the full cost of the meal plan.

Students can request an exemption from the meal plan requirement for dietary, medical, religious or other special considerations, according to the Georgetown University Meal Plan Exemption Policy. Medical documentation is required in the case of dietary and medical exemptions.

Following her allergic reaction, Hagan is now hesitant to go to Leo’s over anxieties of cross-contamination.

“I remain fearful of going to Leo’s in the future,” Hagan said in an interview with The Hoya.

Georgetown dining services also present challenges to students with gluten intolerances. On multiple occasions, Chloe Potamianos-Homem (COL ’25), who has celiac disease, has eaten food at Leo’s that was marked as gluten free, only to fall ill shortly after.

“It starts with a really bad stomachache and basically just goes downhill from there,” Potamianos-Homem said in a phone interview with The Hoya. “I get migraines occasionally along with it, but it’s usually just gastrointestinal symptoms for about 12 hours.”

The only foods at Leo’s that always work for Potamianos-Homem are salad and the food served at the allergen station, she said.

“It’s just very frustrating,” Potamianos-Homem said. “Why am I paying for something that’s just going to make me sick and inconvenience me?”

In addition, students have become more skeptical of dining at Leo’s because of widespread speculation that a recent outbreak of gastrointestinal illnesses originated from Leo’s. There has been no confirmation linking the outbreak to university dining services, but students have noticed dining halls are emptier since reports of the outbreak surfaced.

Chief Public Health Officer Dr. Ranit Mishori (MED ’02) wrote in an email to students Sep. 21 that 12 Georgetown students had reported symptoms of severe stomach pains, vomiting and diarrhea. While the cause of the illnesses had not been identified, students should be aware that there is a national outbreak of salmonella, Mishori wrote. The university posted a separate update on Sept. 22 that 42 more students had reported similar symptoms to D.C. Health.

Maggie Fan (COL ’25) said she suspected she contracted some form of food poisoning after eating food at Leo’s.

“I had the beef tacos at Leo’s and four hours later I started vomiting and getting headaches and not feeling well in general and later that day I started feeling nauseous and I assumed it was probably food poisoning or salmonella,” Fan wrote in a message to The Hoya.

In addition to the suspected food contamination, student activists have expressed concern about the environmental impacts of eating at Leo’s, given its lack of sustainable practices.

Upstairs Leo’s transitioned to reusable dishes and cutlery in January 2020 after years of activism from student clubs, including the Georgetown Renewable Energy and Environmental Network (GREEN). Since the return to campus, the university switched back to using disposable utensils and dishes. The university did not comment when asked on the reasoning behind the switch to single-use utensils and dishes.

If the university has to implement single-use products because of COVID-19 concerns and convenience, Leo’s should switch to compostable utensils rather than plastic, according to GREEN member Willow Volkert (COL ’25).

“GREEN has talked to Leo’s multiple times about trying to get them to compost, and they just refuse. They say that it’s the students’ problem, that the students don’t know what’s compostable and what’s not,” Volkert said in a phone interview with The Hoya. “But if Leo’s switched to all compostable dining-ware, then that wouldn’t be an issue in the first place.”

Ultimately, current sustainability efforts at Leo’s do not go far enough, according to JoJo Farina (COL ’23), a leader of the Zero Waste Team of GREEN. As a result, the Zero Waste Team hopes to collaborate with Leo’s to implement more eco-friendly dining programs in the future.

“On the plastics side of things, our main program will obviously be working with Leo’s to figure out a solution to get back to reusable dishware both upstairs and downstairs because the current situation is simply not acceptable,” Farina said.

The program, which only operates at Leo’s, is free and open to all students on meal plans. This effort serves as part of the university’s ongoing efforts to reduce single-use items, according to the Hoya Hospitality website.

In addition to sustainability backsliding, students are frustrated that the administration has failed to address students’ other dining concerns, according to Leonard.

“People, including myself, on GUSA leadership don’t really see those talking points as adequate solutions to the issues that we’re facing as students,” Leonard said. “We really do believe that a more drastic overhaul or evaluation of the dining situation on campus is necessary.”

Update: On Sept. 24 the university sent an email to students that their investigation into the illnesses found that two students were determined to have Norovirus.

Update: This article was edited due to updates related to a quote from Isabel Janovsky.