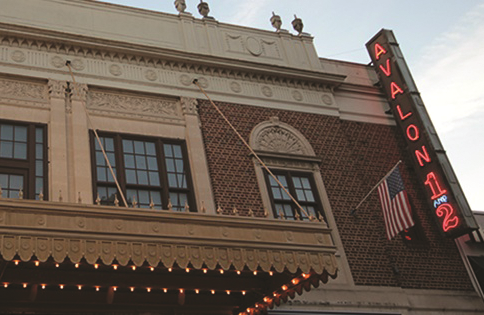 Passing by the CVS Pharmacy on M Street, visitors to the Georgetown neighborhood might never guess that intrepid students could visit the same building and catch screenings of avant-garde dramas or racy adult films in the 1980s.

Yet the area used to be home to a variety of independent film theaters with only a handful of screens and an eclectic group of movie showings. Sadly, many of these theaters have been forced to shut down because of competition from corporate theater chains.

Still, indie nonprofits like The Avalon Theatre in Chevy Chase and the AFI Silver Theatre and Cultural Center in Silver Springs, Md., are bucking the trend, relying on community funding to supply niche film fans with their fix.

Indie Underdogs
While major chain theaters like AMC Theatres dominate the movie-watching experience today, a variety of venue types have competed for supremacy. In the infancy of cinema in the 1910s and ’20s, theater exhibition was quite eclectic, with tiny storefront theaters and massive urban halls drawing patrons. Because films were silent, venues often accompanied the motion pictures with live music.

Caetlin Benson-Allott, an English professor and core faculty in the film and media studies program, explained how independent theaters have struggled to contend with larger corporate theaters throughout the history of film. When movies first took off in the United States, the style of film venues varied widely, and live music often accompanied the motion pictures, Benson-Allott said.

“This is during the silent period, and you saw everything from storefront nickelodeon theaters that might just be folding chairs with a projector and a piano to these grand palaces in the urban centers that could seat thousands of patrons,” Benson-Allott said in an interview with The Hoya.

However, technological advances in the early ’30s soon made it hard for tiny storefront theaters to compete with corporations. The costs of synchronizing sound with pictures began to strain independent theaters, creating the opportunity for studios to invade the space for profit.

“Once movie theater exhibitors started moving over to synchronized sound as the latest gimmick, which hit at the exact same time as the Great Depression, corporate theater chains owned by the major Hollywood studios became the norm of theatrical exhibition in the U.S.,” Benson-Allott said.

With the economic constraints of the Great Depression, theaters owned by major studios were able to afford the transition to synchronized-sound films, unlike independent theaters.

“It cost an awful lot of money for an exhibitor to go from just a silent projector to buying a new projector that could read sound on film and also a speaker system to project that soundtrack,” Benson-Allott said.

In this new market, studios were able to create monopolies that threatened the livelihoods of independent theaters, as they were involved in both distribution and exhibition. Studios developed methods such as block booking, which packaged big-name film releases with other movies from the same studio.

“[Studios would say] if you want to exhibit ‘Casablanca,’ you have to also agree to exhibit these three other duds that we made, but we want our money back so you’re going to exhibit them,” Benson-Allott said.

To break up these monopolies, the U.S. Department of Justice brought a case against the largest film studios in 1948. The lawsuit, United States v. Paramount Pictures, Inc., went to the Supreme Court, which ruled that theaters needed to end these vertically integrated block booking systems. As a result, independent movie theaters in the United States had their heyday between the ’50s and ’80s, with a flourishing of classic-oriented repertory houses and independent drive-in theaters.

Yet the indie boom was short-lived. Conservatives seeking to reduce corporate regulations allowed major studios to dominate the film venue landscape once again, as regulations restricting vertical integration were loosened and corporate mergers were largely unchallenged by the Department of Justice in the ’80s.

“After President [Ronald] Reagan was inaugurated in 1980, his administration rolled back a lot of the restrictions on studios owning their own chains or holding partial ownership of theater companies,” Benson-Allott said. “We’re living in something today closer to the pre-Paramount decision that makes it a really tough marketplace for independent theater owners.”

This pattern has been repeated in Washington, D.C., as independent theaters, especially in the Georgetown neighborhood, have struggled to stay in business, according to Bernard Cook, the founding director of the film and media studies program.

“There used to be more commercially operated cinemas in Georgetown itself. There was a place called the Biograph, which is now a CVS,” Cook said.

The Biograph Theater replaced a car dealership in 1967 and showed a mix of adult films and art house movies. It closed in 1996 and the property is now a CVS.

Another independent theater, The Foundry, was a seven-screen theater known for its cheap $3 ticket prices and eclectic foreign film selection. The Foundry, formerly located at 1055 Thomas Jefferson Street NW, closed in 2002 and has been replaced by an office complex.

The Biograph Theater and The Foundry are just two examples of independent theaters that have closed in Georgetown. Others include Key Theater, which closed in 1997, and Georgetown Theatre, which stopped showing movies in the ’80s, although the facade remains.

Against the Grain
Independent theaters by nature operate outside the control of major corporations: An independent theater is a local chain or an individual theater, according to Benson-Allott. As a result of their independence, these theaters can curate an experience for theatergoers by showing films outside the mainstream, providing a distinct movie selection that larger chain theaters cannot compete with.

Sky Sitney, associate professor of the practice and director of the film and media studies program, explained that large theater chains lead to homogenous movie offerings because they need to cater to mass audiences.

“There might be 25 theaters in a city, but 15 to 20 of them might be playing the exact same content,” Sitney said.
Compared to larger theater chains, independent theaters are more likely to feature underrepresented voices, according to Sitney. Corporate theaters tend to focus on playing movies that appeal to the mass audiences, rather than experimental or niche films.

“Big theaters like an AMC will not make room for these tiny little precious gems, these weird films, because all they can think about is their bottom line,” Sitney said. “They’re not going to show a brilliant, amazing, incredible film that could change your life or inspire you immensely because they know that it might only appeal to the tiniest population.”

Beyond serving simply as an outlet to see movies, movie theaters hold an invaluable place in fostering a community’s culture. Watching movies together with other people adds value to the experience, according to Cook.

“There’s value added in the experience of watching with other people, ideally talking after the film,” Cook said. “There’s a program, conversation and building a common culture around film.”

Chad Davis (SFS ’19), co-founder of the Georgetown Independent Film Society, pointed out that independent theaters contribute to the creation of a distinct local culture.

“[Independent theaters] make it so that the control isn’t by these higher ups in L.A. that have never been to D.C. and don’t understand the culture of D.C.,” Davis said.
Without independent theaters in D.C., the special film character of the District is at risk of being replaced by a corporate monoculture, and perspectives that fall outside the purview of Hollywood producers will be neglected. Luckily, the D.C.-Maryland-Virginia area still boasts a few venues not controlled by AMC.

Though the landscape of independent theater in D.C. has changed significantly with the mass closures of independent cinemas in the ’90s, Georgetown students can still find these places in the city.

AFI Silver Theatre and Cultural Center is a three-screen nonprofit in Silver Springs that houses a repertory theater that focuses on older films and curates fascinating programs, including its Latin American Film Festival. The theater also shows some screenings exclusive to their venue in addition to playing art house films.

Todd Hitchcock, director of programming at the Silver Theatre, describes how there is still a desire to watch older, classic films.

“We sometimes joke that we won’t show the studio blockbuster when it’s brand new, but we’ll wait 30 years and then we’ll show it as a classic,” Todd Hitchcock said in an interview with The Hoya.

The Silver Theatre is also distinct, as it has the equipment to present film with old-fashioned movie reels, which larger theaters with only digital projection technology cannot do.

The Avalon Theatre in Chevy Chase is another nonprofit theater, originally founded in 1923. The theater closed in 2001, but was able to reopen in 2003 after the work of a nonprofit community group called the Avalon Theatre Project.

These nonprofits rely on donations and community funding, demonstrating how financial models of independent theaters are adapting to new conditions.

For even more independent variety, moviegoers can visit Suns Cinema on Mount Pleasant Street in D.C. and Cinema Arts Theatre in Fairfax, Va.

Landmark Theatres represent a growing mid-tier niche of theater that is between independent theater and the large-scale chain. These types of theaters play more independent and niche films than the large chains, even though they are themselves a chain, owning 52 theaters across the country.

“We strive to deliver consistently diverse and entertaining film products from both art, foreign and independent film suppliers as well as larger studios in a sophisticated, adult-oriented atmosphere,” Emilia Peixoto, senior regional publicist for Landmark Theatres, wrote in an email to The Hoya.

The growth of these mid-tier theaters is just one example of how theaters are adapting to the changing D.C. film landscape. Even as smaller theaters are threatened by their corporate counterparts, fans of independent film can visit alternative venues to keep their favorite venues in business.

“As long as film and movie theaters continue to be the leading force in film culture, supporting independent movie theaters and independent filmmakers gives them the fighting chance against the marketing behemoths of the studios,” Benson-Allott said.