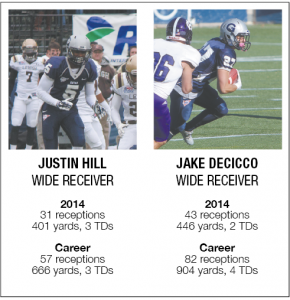 In his second season as head coach for the Blue and Gray, Georgetown’s football Head Coach Rob Sgarlata will rely on several talented veterans as the Hoyas work to improve upon their 3-8 record from last season.

“[Having Hill and DeCicco back] is really important,” Sgarlata said. “We ask those guys to do a lot.”

Although Hill only started in one season in high school, his career at the Hilltop has already been impressive. Hill saw playing time in all 11 of his games freshman year, starting in nine. In his sophomore season, Hill started all 11 games and recorded the first three touchdown receptions of his career. Hill is expected to be a key player in this offense, but moving forward, his role will not only be to perform on the field but also to continue leading the underclassmen to success on and off the field.

DeCicco, a versatile athlete, won many accolades during his high school career. His success has carried over into his college career as he has been one of the most important receivers on the team in the past two years. In his sophomore season, DeCicco played in all 11 games and started eight, finishing second on the team with 445 yards on 38 catches and scoring two touchdowns. Last season, DeCicco started all 11 games and led the team with 43 receptions and 466 yards, finishing the season with two touchdowns. DeCicco recently transitioned from an outside receiver to a slot receiver, but he noted that it wouldn’t change his game too much.

“I’m just trying to be a crisp route runner,” DeCicco said. “That’s something that I really want to focus on, and I think we all can say that we try to improve on being better blockers. That’s something we pride ourselves on in our group.”

Similar to DeCicco, Hill has some skills on which he wants to work.

“For me personally, [I’ve been working on] footwork and route work, getting in and out of my breaks and trying to get open,” Hill said.

Both DeCicco and Hill have played alongside Nolan for two seasons now and are familiar with his style of play.

“[Kyle and I] have just tried to build that trust with each other,” Hill said. “[We’ve worked on] knowing that we’re going to be in the right spots, and I think we’ve done that pretty well up through the last couple of years.”

In addition to their relationship with their quarterback, both Hill and DeCicco highlighted the role of the younger players.

“We’ve just been working hard as a unit, we’ve definitely battled injury throughout camp, so a lot of the young guys had to step up, but we have a good group with a lot of depth, so we’ve been pushing each other a lot,” DeCicco said.

“I think [the young wide receivers] have a lot of potential,” Hill said. “With the injuries throughout the camp, they had to step up and take a lot of those reps, and I think that was better for them.”

As for the current season, DeCicco and Hill look to continue their success on the field as key players for the Hoyas’ offense.

This Saturday, Georgetown plays its home-opener against Marist under the lights at 6 p.m. The Hoyas will look to bounce back after a tough loss and earn the win in front of their home fans.